Which words describe Ophelia in the excerpt? Check all that apply.
Hamlet stages a performance about a murder to discern Claudius’s guilt. This is part of Hamlet’s
Rising action
In Act IV of the play, Hamlet stabs Polonius. In what ways does this event move the plot forward? Check all that apply.
How does King Claudius’s speech relate to the central conflict in Hamlet?
Claudius’s vow to avenge Polonius’s death helps move the central conflict to its climax.
How do plot events affect Ophelia’s character development?
At the beginning of the play, Ophelia is obedient and proper, but Polonius’s death causes her to behave strangely and inappropriately.
How does Laertes’s character develop between Act I and Act IV of the play?
In Act I, Laertes is calm and dutiful; in Act IV, he is vengeful and does not care about rules.
Get quality help now

+84 relevant experts are online
Hire writer
Which plot event accounts for the change in Laertes’s character in Act IV of Hamlet?
The murder of Polonius by Hamlet
Write two to three sentences explaining how Ophelia changes over the course of the play. Include at least one plot event that causes Ophelia to change.
At the beginning of the play, Ophelia is dutiful and polite; she does exactly what her family tells her to do.
Get to Know The Price Estimate For Your Paper
Topic
Number of pages
Email Invalid email

Then, Hamlet’s erratic behavior and Polonius’s death cause Ophelia to go mad. She becomes confused and starts behaving strangely. Ultimately, her madness leads to her death.

In Act IV of Hamlet, Laertes demands revenge for his father’s death, King Claudius plots with Laertes to kill Hamlet, and Hamlet announces his return to Denmark. How do these events work together to build suspense?
They suggest that there will soon be a deadly showdown between Claudius and Hamlet.
Hamlet stages a performance about a murder to discern Claudius’s guilt. This is part of Hamlet’s
Rising Action
Which words best describe Gertrude in Act IV of Hamlet?
Nervous, defensive
Which statement best describes how this plot event shapes Claudius?
Laertes’s popular support increases Claudius’s insecurities.
Francisco and Bernardo, two castle guards in Elsinore, Denmark, stand alert on the castle steps at night. This is part of the plot’s
Exposition
In Shakespeare’s Hamlet, what plot event causes Ophelia’s mental decline?
Polonius’s violent death
In act IV of Hamlet, Claudius’s interaction with Laertes suggests that Claudius is
Manipulative
How does Gertrude’s reaction advance the plot of the play?
By suggesting that Ophelia’s madness is a sign of greater troubles
How does the excerpt reveal character development?
Claudius exhibits sensitivity toward Ophelia and regret for his actions.
Ramona Rice
Share 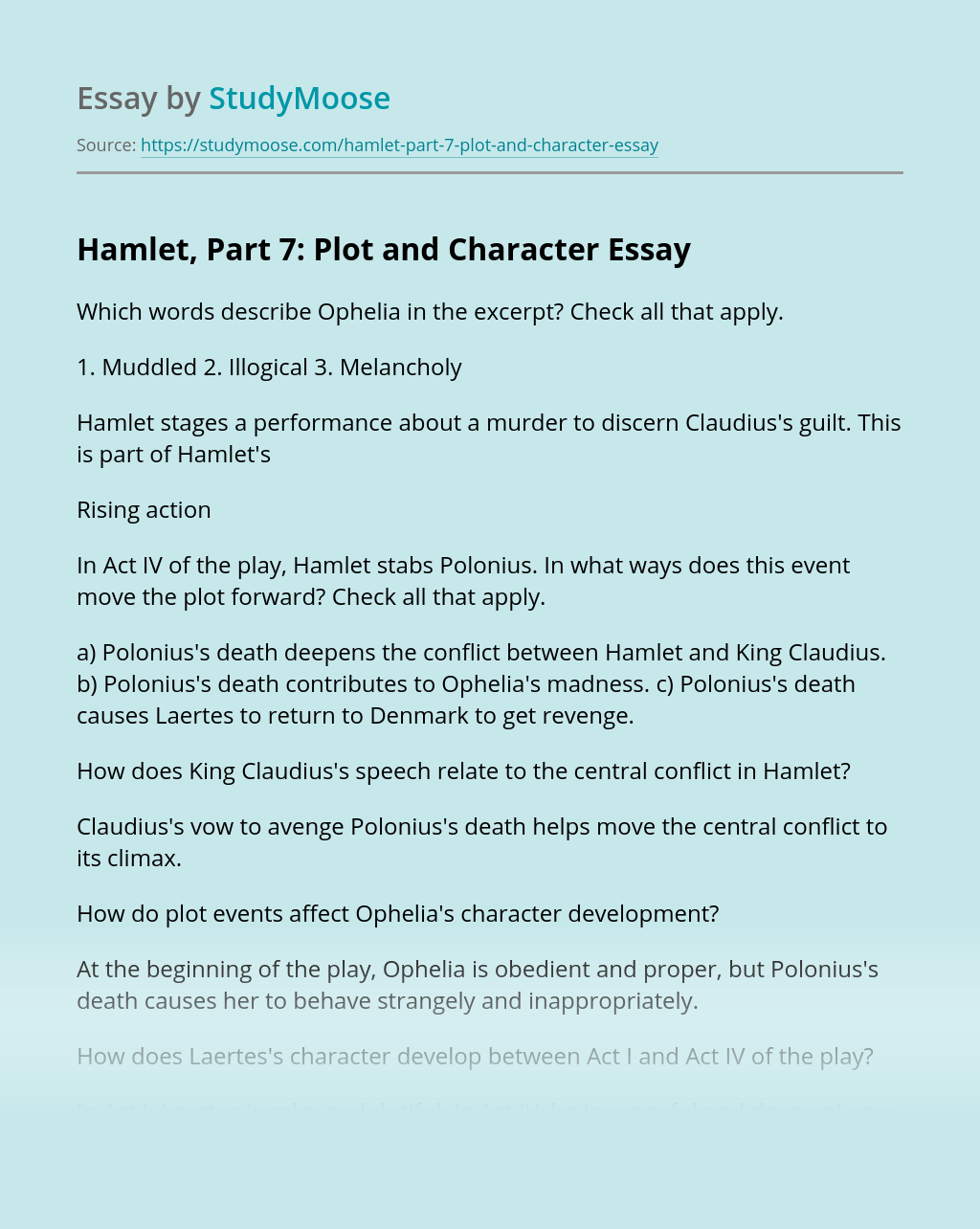