The Absolutely True Diary of a Part-Time Indian Plot Overview

Don't use plagiarized sources. Get your custom essay on
“ The Absolutely True Diary of a Part-Time Indian Plot Overview ”
Get custom paper
NEW! smart matching with writer

WellPoint And Reardan, WA. The Absolutely True Diary of Part-Time Indian features two main settings, the Pacific Northwest towns of WellPoint and Reardan. Junior is the main character and he is fourteen who lives in Spokane. Junior experiences many moments of change and growth throughout the book. One huge change Junior makes is realizing that even though he has been an outsider in many ways his whole life, he is also a part of “many tribes.

Proficient in: The Absolutely True Diary of a Part-Time Indian

” After a lifetime of bullying from his fellow tribe members and racism from his teachers and peers at Reardon.
Junior was born with water on the brain that means he was born with too much cerebral spinal fluid inside his skull. Junior was also born with too much grease inside my skull and it got all thick, muddy, and disgusting, and it only mucked up the works. People would draw cartoons about Junior because they think he was funny and weird.

Junior is a cartoonist and he think he’s pretty good at it, and Junior was poor, and drew cartoons about money. Junior’s best friend is Oscar and he was very sick, and Junior went to his house his eyes were red, watery, and snotty and when Junior touched Oscar he yelped like crazy. Oscar was only an adopted stray mutt, but he was the only living thing that Junior could depend on. Junior was more dependable then Oscar’s parents, grandparents, aunts, uncles, cousins, and big sister. to Junior asked his mother to take Oscar to the vet and she said he will alright, but she was lying, and Junior knew that because whenever his mother lied her eyes would get darker. Junior’s mother didn’t have money to pay for Oscar and Junior said he would pay the money back when he gets a job. Junior thought what job can an Indian boy can get. Juniors dad said they have to take Oscar outside because he was suffering, and they needed to help him. Junior mom can read the newspaper in fifteen minutes and tell Junior baseball scores, the location of every war, the latest guy to win the Lottery, and the high temperature in Des Moines, Iowa.

Although Junior is terrified that Roger will come after him and kill him, his grandmother reassures him that Roger probably just wanted to see what the new kid was made of the fact that he walked away probably means he respects Junior now. Still, Junior is unconvinced. Junior remembers that when he was twelve, he fell in love with another popular girl, an Indian girl named Dawn who mostly only spoke to him to make fun of him. From then on, he knew that he would always be one of those guys who always fell in love with the unreachable, unlettable, and uninterested. In the text it says “Of course, I was suspended from school after I smashed Mr. P in the face, even though it was a
complete accident” (Pg.27). This quote means that Junior threw the book as a sign he wasn’t willing to give up. All the other students on the reservation give up, but Junior was different. Mr. P was acknowledging those differences. Second Evidence is “”You bet,” I said. I was nervous. Why was he being so friendly? Was he planning a sneak attack on me? Maybe he was going to smash me in the nose with a calculus book” (Pg. 27). This quote means that Mr. P wasn’t mad at Junior and he was being friendly.

On Halloween, Junior and Penelope both arrive at school dressed as homeless people—an easy costume for Junior, he notes, since his clothes are in poor condition anyway. They compliment each other’s costumes you look really homeless and Penelope says that her costume is a political statement. Instead of trick or treating, she will be collecting spare change for charity. Junior receives an enthusiastic email from his sister in which Mary tells Junior about her new home in Montana. Junior enjoys Thanksgiving with his mom, dad, and grandmother, but misses Rowdy because he always used to come over for a pumpkin pie eating contest with Junior. Junior draws a cartoon of the two of them like we used to be as a pair of superheroes with matching costumes, bumping fists and brings it to Rowdy’s house. One day, when Junior leaves class to use the bathroom, he hears someone vomiting violently in the girl’s bathroom next door. Worried that someone is severely ill, Junior knocks on the door and asks if the person is okay, but she yells at him to go away. Even so, for reasons he isn’t quite sure of, he decides to wait in the hall for the person to come out so that he’ll know she’s all right. One day while watching Penelope at a volleyball game, Junior marvels at how beautiful she is with her pale skin and her white uniform all white on white on white, like the most perfect kind of vanilla dessert cake you’ve ever seen.

Although Junior’s friendships with Gordy and Penelope improve his school experience, he still feels like a stranger both in Reardan and on the reservation it was like being Indian was my job, but it was only a part time job. People in Reardan assume he has money because there’s a casino on the reservation, and so Junior pretends he isn’t poor in order to fit in. The first evidence is “I’m not trying to be cute,” she said. “I’m wearing this to protest the treatment of homeless people in this country. I’m going to ask for only spare change tonight, instead of candy, and I’m going to give it all to the homeless.” (Pg.65). This quote means they are trying to protest how poor and homeless people live and how they feel. Second evidence is “Of course, after that little moment, I thought that Penelope and I would become closer. I thought that she’d start paying more attention to me and that everybody else would notice ml then I’d become the most popular dude in the place. But nothing much changed. I was still a stranger in a strange land. And Penelope still treated me pretty much the same. She didn’t really say much to me. And I didn’t really say much to her” (Pg. 68). This quote means that Junior likes Penelope and he wants to be close to her. Junior wants Penelope to give him more attention and talk to him more.

When Christmas Eve comes, Junior’s family doesn’t have enough money for presents. Junior’s dad is so depressed that as he always does when there isn’t enough money, he takes the money they do have and runs away for a week to get drunk. To make clear that he hasn’t fallen in love with white people and still sees good in Indians, Junior compares his family to the families of his white classmates. He loves Mary and his mom and dad and grandmother. In spite of their flaws, he believes his mom and dad are good parents because they make sacrifices for him, care about him, talk to him, and listen to him whereas many of his white classmate’s fathers ignore them. When Grandmother’s wake is held three days later, almost two thousand Indians attend. Out of respect for Junior’s and his family’s grief, they stop tormenting him for being a traitor, an act of kindness for which Junior is grateful. Even Rowdy just stands far away, and Junior says he would always be my best friend, no matter how much he hated me. Junior begins his next chapter with the following sentence a few days after I gave Penelope a homemade Valentine and she said she forgot it was Valentine’s Day, my dad’s best friend, Eugene, was shot in the face in the parking lot of a 7-Eleven in Spokane.

As basketball season continues, Junior’s shooting makes him an unexpected star on Reardan’s basketball team. He’s still too much of an outsider to be compared to great Reardan players of the past like his teammates sometimes are, he starts to wonder whether he could build his own legacy. The first evidence is “We held Grandmother’s wake three days later. We knew that people would be coming in large numbers. But we were stunned because almost two thousand Indians showed up that day to say good-bye” (Pg. 132). This quote means that Junior’s grandmother’s wake was held three days later almost two thousand Indians attended. Second evidence is “Coach said he used to throw up before games. “Kid,” he said, “some people need to clear the pipes before they can play. I used to be a yucker. You’re a yucker. Ain’t nothing wrong with being a yucker” (Pg. 148). This quote means Junior and his dad used to throw up before the game because they were nervous, and they were scared.

Junior is a fourteen-year-old boy living on the Spokane Indian Reservation in Washington. He was born with hydrocephalus (water in the brain), which has led to a number of health problems. He is devastated when his pet dog, Oscar, becomes ill from heatstroke and his family does not have enough money for a veterinary visit. The only way to put Oscar out of his misery, then, is for Junior’s father to shoot the poor creature. Junior runs to his friend Rowdy, who attempts to cheer him up by suggesting they visit a local powwow. Arnold Spirit Jr. (Junior) tells about his early life on the Spokane Indian reservation. How doctors predicted he would die from complications of hydrocephalus his being born with excess spinal fluid on the brain. This applies to real life because this is true of the author and what he was experienced. 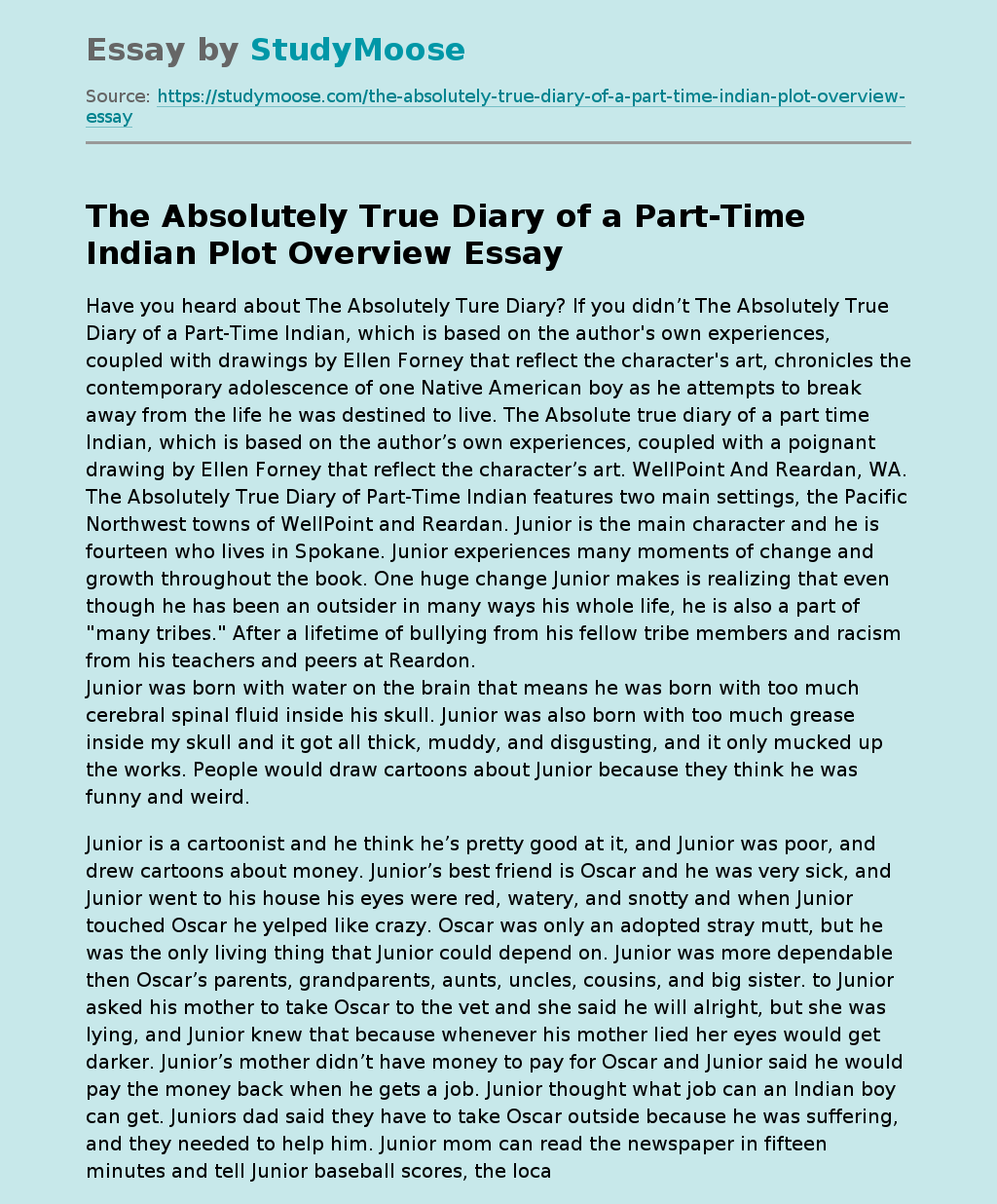