Relationships are a driving force in society and there is no place where this is seen better than in Hamlet by William Shakespeare. Hamlet is the Prince of Denmark and he has recently lost his father. He is the next in line to the crown, but for some reason he has not obtained it. Hamlet is a tragic figure from the start, but it is his attempt to relate to others that makes him even more tragic. Hamlet has a detestable relationship with King Claudius, his father’s successor.

Don't use plagiarized sources.
Get Your Custom Essay on Hamlet and Relationships Just from $13,9/Page

Claudius is Hamlet’s uncle and he has married Hamlet’s mother. Hamlet’s rapport with Claudius is openly hostile, yet he refuses to stand up to him. Even though Claudius is Hamlet’s major antagonist, he acts as if he cares about Hamlet in public while Hamlet does not hide his repulsion of the new king. He does not challenge him with his charges murder, information he obtained from his father’s ghost, and adultery, but instead he plots to allow Claudius tell on himself.

Hamlet has the opposite relationship with his father’s ghost. While he shows nothing by disdain for Claudius, he shows his father respect and admiration. He heeds his father advice about revenging his death while not seeking revenge upon his mother, Queen Gertrude. There is an obvious love and affection in the relationship between Prince Hamlet and the ghost of King Hamlet because they obviously miss each other from the tenderness in which they speak to each other.

The ghost also trust Prince Hamlet with the information and the instructions of what he wants done to King Claudius. It is also obvious that Prince Hamlet completely trust his father because he does not even question the validity of the facts surrounding his death. Hamlet displays his complex personality in the relationships that he has with the different characters in the play. He can be openly cruel and disrespectful to those who he finds contemptible and yet completely loyal and loving to those whom he cares about. 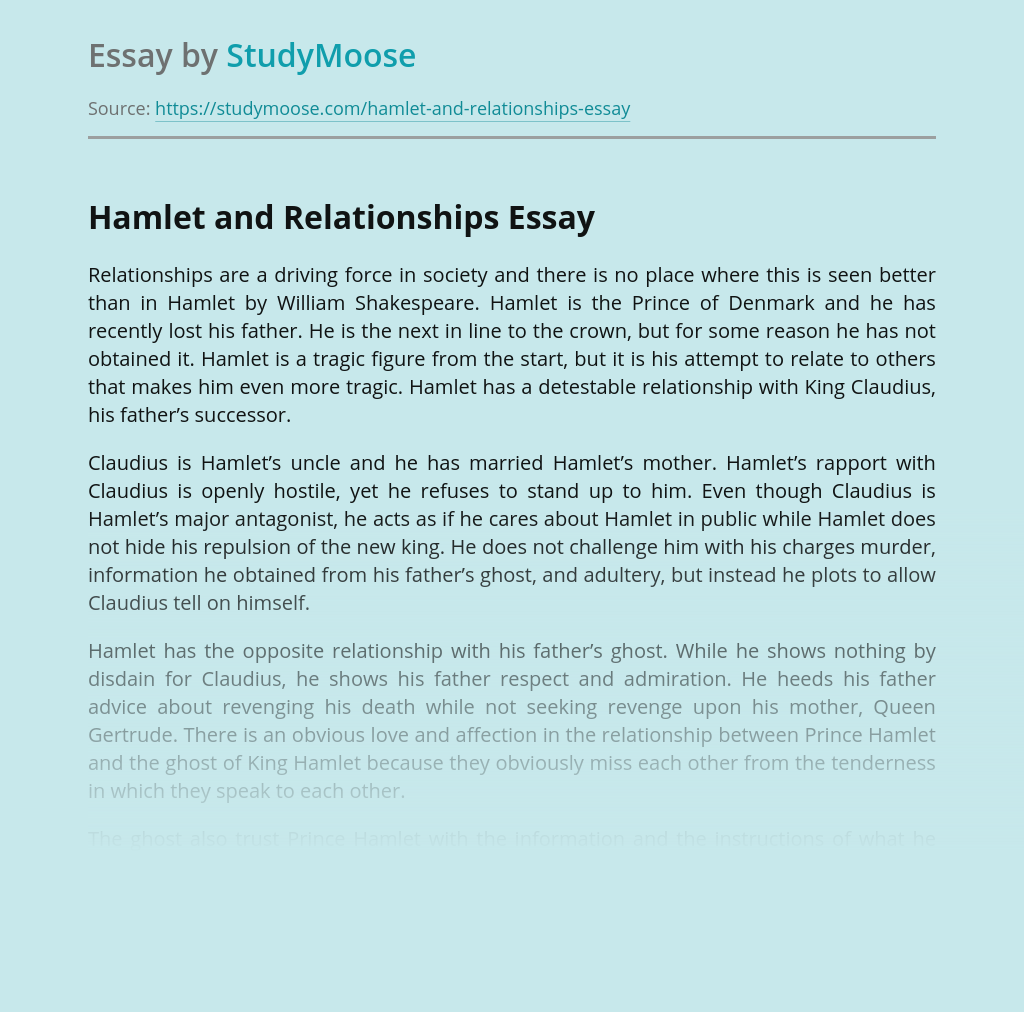 The Insight About Hamlet's Elusive and Mysterious Character

Hamlet’s famous and memorable soliloquy, “To be, or not to be,” provides us with insight on the different emotions Shakespeare places into Hamlet’s character. This soliloquy is spoken by Prince Hamlet in Act III, scene I, lines 62-96. It is arguably one of the most famous speeches in English literature and reflects many important themes... VIEW ESSAY

The Tragedy of Hamlet, Prince of Denmark by William Shakespeare is one of his most influential tragedies telling the story of treachery, revenge and moral corruption. The play is about Prince Hamlet who seeks to exact revenge on his uncle Claudius for murdering his King Hamlet, Claudius’s brother. Hamlet’s father then succeeds the throne and... VIEW ESSAY

How does the queen describe hamlet to the king? (Scene 1) As mad as the waves know when when they struggle together in a storm. What two facts does the king realize when he is told about Hamlet’s killing of Polonius? 1.it was supposed to be him who hamlet killed. 2. Claudius will be the... VIEW ESSAY

The Theatrical Play Hamlet was a story about a man name Hamlet who meets a ghost who “apparently” was his father, and tells hamlet to seek revenge for his murder from his brother who was Hamlets Uncle that married his mother. Hamlet love affair sees him insane, but does not now it is fake, later... VIEW ESSAY