A critical analysis of Shakespeare’s “Hamlet”, focussing on the question of Hamlet’s madness

Hamlet. Is he an insane madman or a revengeful, scheming, genius? There are many conflicting ideas and theories on this subject, and hopefully this paper may be of some assistance in clearing up the confusion. The paper is divided into three separate analytic sections beginning with the beginning of Hamlet1s so called madness, and why it may have occurred. Next, is an analysis of why Hamlet delays revenging his father1s death.

Don't use plagiarized sources. Get your custom essay on
“ Question of Hamlet’s madness ”
Get custom paper
NEW! smart matching with writer

To conclude the paper, Hamlet1s incestuous acts towards his mother are discussed, in William Shakespeare1s Hamlet. In the first act Hamlet seems to be in a perfectly sane state of mind throughout all five scenes. It is in the second scene where the audience begins to see a change in his character. Ophelia meets with Polonius and recalls the meeting she had previously with Hamlet. She tells her father that Hamlet came to her disheveled and in a shaken state of mind, speaking of 3horrors.

Opelia answers a question posed by Polonius by which she replied that she had told Hamlet that she could not see or communicate with him any more. Her father makes reference to Hamlet1s madness once again by proclaiming that what his daughter said, 3… hath made him (Hamlet) mad.2 (Act 2 Scene 2 line 123). The argument of whether Hamlet is insane because of his love for Ophelia is often debated, but a more confusing and complex situation is the struggle within Hamlet1s mind.

His personal struggle is revealed to the audience in scene one of the third act. In this scene Hamlet recites his famous 3To be or not to be-that is the question:2 (Act 3 Scene 1 line 64) speech.

Here the the audience truly realizes that Hamlet is torn two ways in his life. To be or not to be, essentially is Hamlet debating on whether he should toil the pains of living in such a harsh world and fight to avenge his father1s murder or take his own life. Hamlet is confused as to whether he should avenge his father1s death when he himself, as Sigmund Freud1s 3Oedipus Rex Complex2 suggests, wished to murder his father to gain all of his mother1s attention. But, in the back of Hamlet1s mind, which keeps him in constant turmoil, is his loyalty to his family and moreover his father. Hamlet, in act four scene two, meets with Rosencrantz and Guildenstern and he seems to be breaking down into insanity. Hamlet had just killed Polonius, and his two friends were questioning him as to where he placed the body of the dead man. The strange thing about this scene is that Hamlet seems to play with Rosencrantz and Guildenstern and does not give them a straight answer. Hamlet has practically transformed into a different person and doesn1t seem to be completely sane.

Next is another situation that cannot be totally explained. The situation being Hamlet1s delays in avenging his father1s death. The first that Hamlet learns of his father1s death is in act one scene five, where he follows the ghost. Hamlet is told, by the ghost, that he (the ghost) is the soul of Hamlet1s father, and that he was murdered by Claudius. This all took place at the beginning of the play and Hamlet waited until the end of the play to get revenge for his father1s murder. Then again there are different perspectives as to whether Hamlet waited until the end to actually gain revenge. For within the play there are many insinuations that Hamlet tortured Claudius all the way up until he killed the king. Two instances are particularly evident. First, the play within a play confirms that Claudius was the murderer of Hamlet1s father. Hamlet stages the Murder of Gonzago in which the actor who is playing the part of the king is murdered in the same manner that Claudius killed Hamlet1s father. At the moment that the actor playing the part of the king is killed Claudius leaps from his seat and rushes out of the theater infuriated. This violent action by the king overjoys Hamlet for now he knows that it was Claudius who murdered his father.

More than the fact that he knows that Claudius is the murderer, Hamlet is slowly and painfully gaining his revenge of his fathers death. The other instance where Hamlet could have killed Claudius was in act three scene three. In this particular scene Hamlet comes upon Claudius while he is knelt in prayer. Hamlet draws his sword and intends to kill Claudius there in prayer but then decides to wait. Hamlet comes to the conclusion that he should wait until Claudius is commuting a sin so he will go to hell, as opposed to killing him in prayer where he would then go to heaven. This is another example as to why Hamlet procrastinates revenging his father1s death. The obvious reason Hamlet waits is to bring more than just the pain of his sword to Claudius and torture him until the end. Finally, Hamlet1s sexual attraction towards his mother is to be discussed. In act three scene four, Hamlet enters his mothers bedroom at her wish and first kills Polonius, then proceeds to make love to his mother. This action is called the 3Oedipus Rex Complex2, which was invented by Sigmund Freud on the basis of Oedipus the epic poem by Sophocles.

This theory states that all young men wish to destroy their fathers so that their mother1s attention will be guided on them solely. Also the fact that Hamlet thought that Polonius was Claudius adds to the evidence that Hamlet had the 3Oedipus Complex2. Hamlet was obsessed with his mother but before the situation in the bedroom escalated his father, the ghost, appeared and reminded him of the plight which he was supposed to be accomplishing. Hamlet1s madness at times is justified and at other times is pure insanity. At first Hamlet seems to be going mad over the fact that he is not allowed to see Ophelia. Then it seems that the fact that he is overwhelmed with his father1s death, and begins to fight with himself over the thought of suicide. He is then determined to gain revenge for his father and goes about torturing Claudius in a systematic and genius manner. Finally, Hamlet is caught up in his love for his mother which brings him back to the point of insanity. In conclusion Hamlet is torn between two worlds, that of the sane and well and that of the crazed and insane. 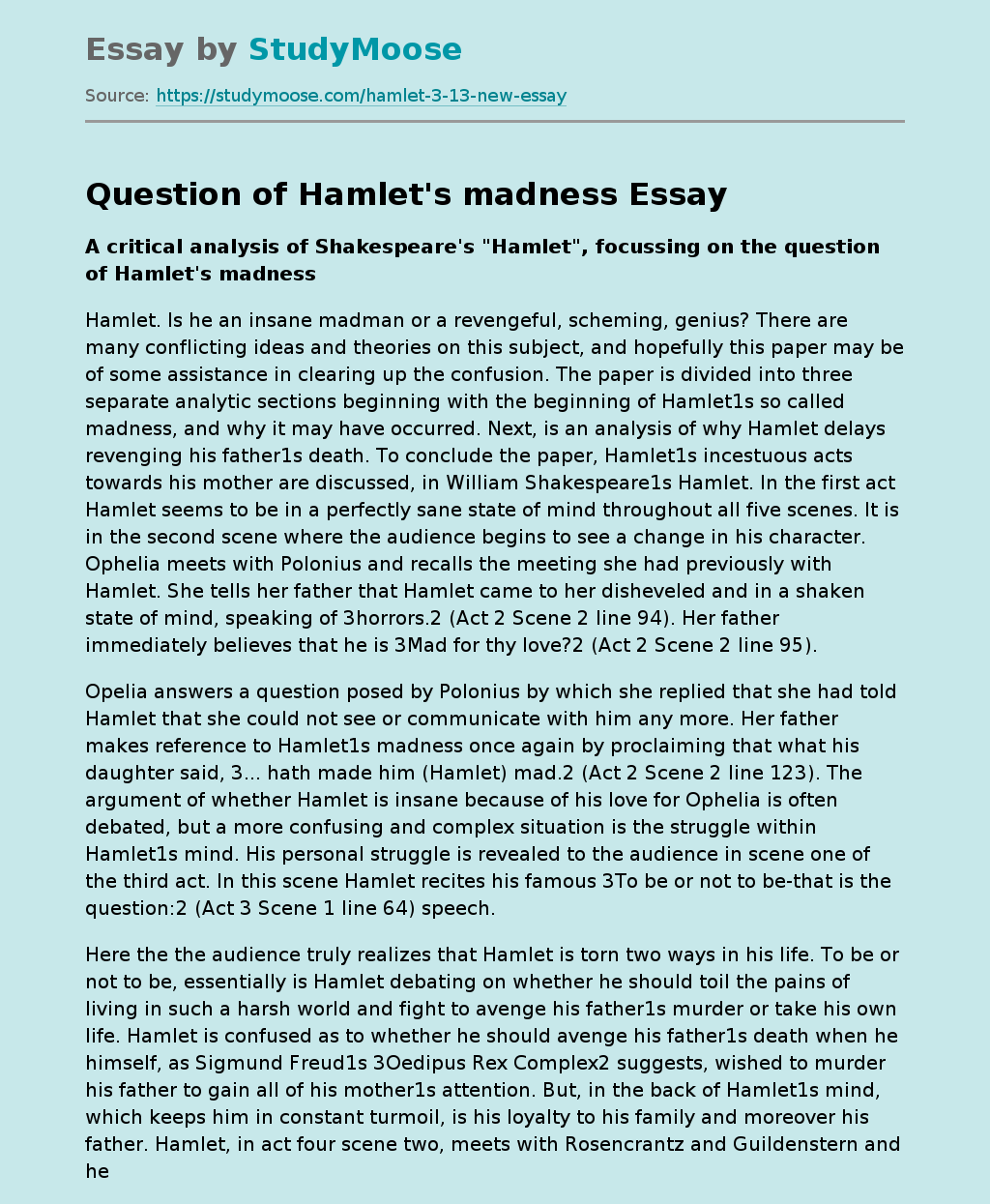