Guy Montag as a Hero Essay

When we hear the word ‘hero’ we think about those who fight for our country out at war or those who put their lives in jeopardy everyday protecting their community like a police officer or fireman, all of these citizens doing this for a small wage in comparison to Rap artists who rhyme profane words making millions of dollars. However you don’t have to live on the streets or have more money than sense to be a hero, you just have to make a difference.

Don't use plagiarized sources.
Get Your Custom Essay on Guy Montag as a Hero Just from $13,9/Page

In the end identifying someone as a hero or a villain is up to you, it’s in the eye of the beholder.

Guy Montag was a fireman for his community and made his mark as a hero through countless acts of courage, bravery, and emotion in the novel Fahrenheit 451 by Ray Bradbury. Montag stood up for his rights on books and defied his government, even if it meant losing hisfamily, friends, job, and property all in order to do what he believed in.

Bradbury symbolizes Montag as a sympathetic hero through the use of diction. Montag is one of the only characters in the novel to actually feel an array of different emotions and understand them.

For instance, after the old woman had stood atop the pile of burning books and burned with them, Montag pondered what he saw, “There must be something in books, things we can’t imagine, to make a woman stay in a burning house; there must be something there. ”(51) and for the first time Montag was exploring feelings he was not very familiar with, like curiosity and sympathy. For the first time the reader gets the feeling that Montag acts differently to the rest of the characters and may be on to something due to his curiosity.

Montag shows sympathy in a conversation with Millie, “A man had to take a long time to put them down on paper”(52) referencing the author of the novels that he and his fellow firemen had burnt. Montag gradually becomes a hero however this results in getting himself into trouble. As the book progresses it is fair to say that “Curiosity killed the cat” as Montag got caught red handed. Courage, the second attribute that Montag performs,can be seen through the use of imagery. Throughout the novel Montag shows that he has courage to do the right thing even though things are against him.

For example, “Montag places his hand on the woman’s elbow and says, ‘You can come with me'”(39) referring to the old woman who refused to leave her precious books. He tries to convince the old woman to get out of the house which was about to be burned even though other men had already told her to leave. This act requires courage because in a society presented in Fahrenheit 451, nobody cares about others and by trying to help the old woman; Montag creates suspicion toward himself by the other firemen, all because he was trying to save someone’s life. A second example of his courageousness can be found in the river scene.

Bradbury paints a picture in the readers mind, “A storm of light fell upon the river and Montag dived under the great illumination as if the sun had broken the clouds”(139) using specific word choices and exact detail. In addition to the excellent imagery Montag takes a ‘leap of faith’ or in his case ‘plunge of faith’ as he plummets into the river in his attempt at escaping the mechanical hound. Whether it was fluke or not the reader doesn’t know, but Montag safely escaped and stumbled upon an interesting group of men. As stated before, the hero in this book is the main character, Guy Montag which is depicted through character development.

Montag is a very curious and careful man, and from the start, different from the rest. A lot of Montag’s character is revealed when he is talking to Clarisse. He’s a good listener and Clarisse spikes his curiosity even more, for example, when she describes to him how she enjoys opening her mouth when it rains, he is extremely surprised, but after she leaves, he tilts his head back and tries it too. (21) Clarisse even remarks, “You’re not like the others. I’ve seen a few; I know. When I talk, you look at me. When I said something about the moon, you looked at the moon, last night. The others would never do that” (21).

He is a very thoughtful man, and has a sensitivity about him. He also is a searcher for a deeper meaning in life. He says, “We need to be really bothered once in a while. How long is it since you’ve been really bothered? About something important, about something real? ” (49). Montag is also imperfect. He is really rash and is filled with a passion that sometimes cripples his goals. He can be destructive, like when he rashly kills Beatty (113). He gets confused and overwhelmed with tough situations and sometimes doesn’t know how to get out of them. All and all Bradbury knew he wanted to make Montag the hero and builds that image bit by bit.

Montag represents truth. He represents the want for happiness in our lives and the search for why things are like they are. He wants to find TRUE happiness. Not the happiness everyone else thinks they have. Montag goes on his own search, breaking laws, and doing anything to find out the truth of his own life and that is why he represents the abstract idea of truth. Fahrenheit 451 depicts that a character’s personality may have many more facets than are first visible. Bradbury is able to refract the crystal of Montag’s character, so that it reflects into each reader’s heart a different aspect of humanity.

Once Montag becomes more human, Bradbury makes it nearly impossible for the reader to hold grudges about his past. Using this as a tool, Montag, the first apparent antagonist of the story, overcomes the government, which is the real antagonist, and emerges as the hero. From a work literature you have read in or out of school, select a character that, in your opinion, is heroic. In a well-developed composition, identify that character and explain why he or she is heroic. Thesis: Montag is eventually known as a heroic character. 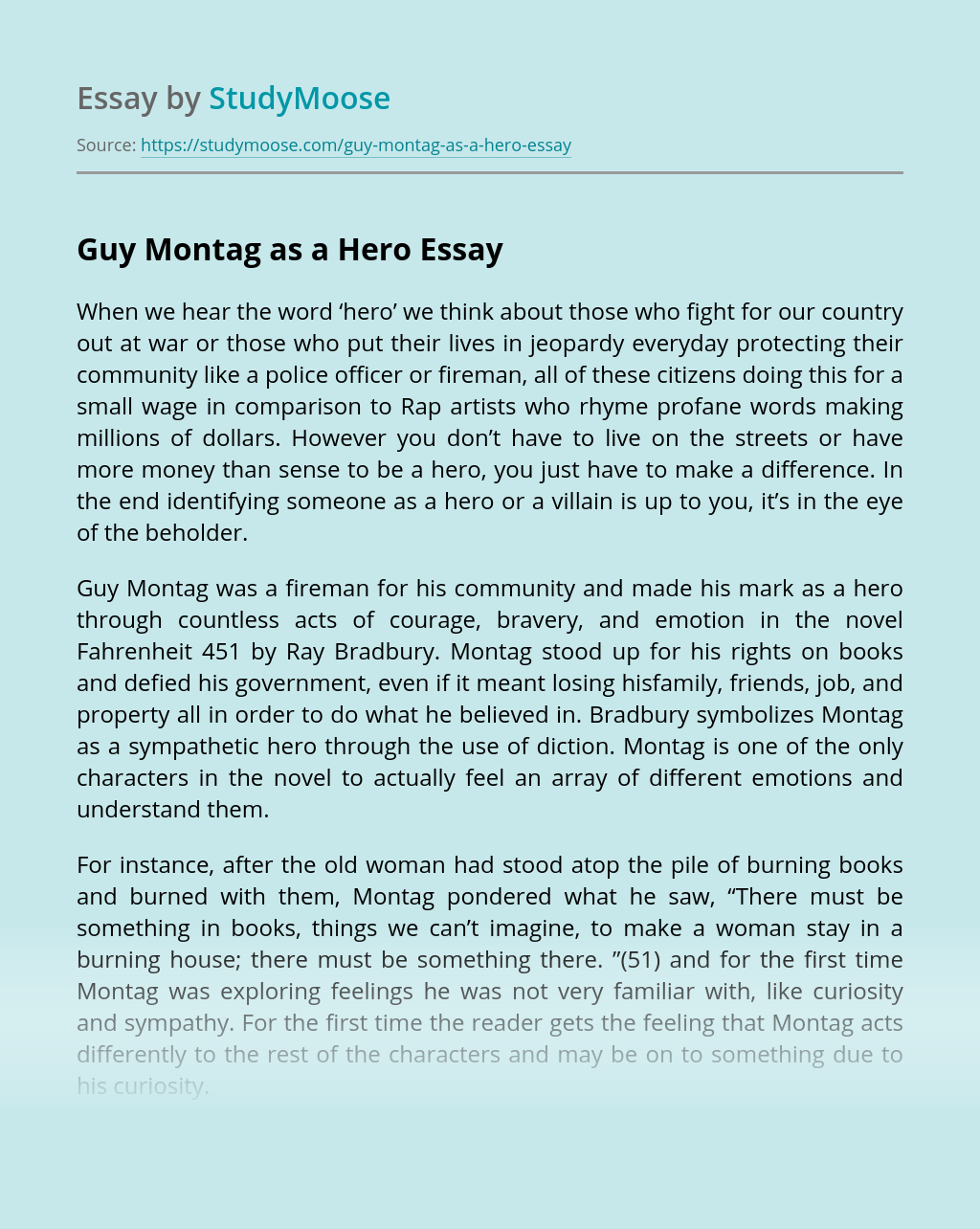 Islam is an Abrahamic religious beliefs followed primarily by those residing in the Middle East and northern parts of Africa. The Arabic word “islam”, or “give up” in English, incorporates what all Muslims are anticipated to do– surrender to Allah and his will. The teachings of Allah through Muhammad are referred to as the Qur’an.... VIEW ESSAY

Many people often wonder what it was the plunged the world into World War II in 1939. Many of the reasons that the world could have been dragged into such a war are because of the ways that many people handled their situations. If people would have handled their issues such as aggression appeasement better... VIEW ESSAY

Reading has become one of the important elements in our life. We have been exposed to the books and learn how to read since we were still children. Couples of books innovations have been created since the past couple years. It started out with paper books or what we can call it as ‘traditional books’... VIEW ESSAY