Gunns Limited are a forestry enterprise based in Tasmania, with market capitalization of $204 million. Gunns undertook a pronounced change of strategic direction in 2010, attempting to revitalize itself and ensure future success after poor recent social and financial performance. This strategic direction was not allayed into financial success in the following year, 2011, with a loss reported of $355.5m.

The purpose of this report is to examine the external business environment and its subsequent impact on the future performance of Gunns Limited through an analysis of each of the elements of the PEST model (political/ regulatory, economic, sociocultural and technological).

Don't use plagiarized sources. Get your custom essay on
“ Gunns Limited ”
Get custom paper
NEW! smart matching with writer

Furthermore, this report will attempt to outline how Gunns Limited can use corporate social responsibility policies to increase the attractiveness of investment in the company.

The overall conclusion is that though past environmental factors have weakened the performance of Gunns, the moves to address these issues through a strategic rework are a positive step towards improved performance in the future.

Some limitations of the report include:

The weakened financial performance recorded by Gunns in the past two years has been heavily predicated by the difficult economic conditions in which the business has been operating. The global financial crisis (GFC), coupled with an appreciating Australian dollar and the March Japanese earthquake, have all negatively impacted on the competitive position of Gunns, reflected in the $355.5m loss recorded in the 2011 financial year (Gunns Limited 2011a).

The growth of globalisation has the entry into foreign markets by transnational corporations has been allayed into a greater risk factor come times of financial crisis (Lynch, Johnston and Ker 2011).

The GFC softened demand throughout world markets, hurting export-based industries (Forestry Tasmania 2011, Gunns Limited 2010). Furthermore, the collapse of the demand for managed investment products as a realist of the GFC caused the divestment of the initiative by the same name directed by Gunns, spurring further financial losses (Gunns Limited 2010, Gunns Limited 2011a).

Post-GFC, the Japanese market in particular was showing signs of recovery, an important revelation due to the position of Japan as the largest export market for Gunns, accounting for 60% of volume of export sales (Gunns Limited 2011a). However, the March occurrence of a large-scale earthquake in Japan offset this positive development. The operations of two large Japanese customers were adversely affected, decreasing the potential for export revenue for Gunns (Denslow, Longid and Sam Cho 2011, Gunns Limited 2011a, RISI 2011). An estimated 7% of sales were lost to the Japanese earthquake effects (Clark 2011).

Amidst the continuing GFC, the Australian dollar continued to appreciate as a result of the relative strong performance of the domestic economy as compared to other developed economies (Australian Government 2008). Demand for the Australian dollar was strong as Chinese demand for Australian exported minerals continued to grow. As such, the dollar increased to above parity with the US dollar, causing competitiveness issues for Gunns (Gunns Limited 2010, Gunns Limited 2011a). Though the Yen and Australian dollar remained relatively stable in terms of each other, most of the customers Gunns exports to deal in American dollars. Furthermore, the strong domestic currency increased the attractiveness of imports, softening domestic demand for Gunns products as the competitiveness of such products was adversely affected (Gunns Limited 2011a).

Despite the past turbulence experienced within the economic environment, however, all of these issues are not likely to continue into the future, presenting the opportunity for Gunns to capitalise on the strength and stability of the Australian economy and guarantee future success. The GFC has mostly subsided, and world growth figures, especially in the burgeoning Asian region into which Gunns delivers the majority of its exports, have been positive. The potential of China to become a long-term source of revenue for Gunns, and to potentially overtake Japan as the largest customer of Gunns is a very realistic opportunity that Gunns can capitalise on (Gunns Limited 2011a, Plourde 2011).

The future outlook for the economic environment appears to be positive, a sentiment shared by investors who were quick to purchase the forestry assets divested by Gunns in 2010 (Gunns Limited 2011a). The advantages of operating in a stable domestic economy will be realised once the Australian dollar appreciates to pre-GFC levels and the ill effects of the GFC itself have subsided.

Government regulation of all industries across the Australian economy has increased markedly in the wake of World War II (Carlin 2011). In the forestry industry alone, there are over 20 separate laws drafted in relation to forest practices (IRIS 2011, Gunns Limited 2011b). The political and regulatory environment is extremely important to evaluate and analyse, as it has major effects on the profitability and sustainability of Gunns.

Though regulation generally carries with it a negative tone, caused by free-market economic thinking that aims to keep government intervention to a minimum, the regulatory stance imposed by the Tasmanian government on Gunns is not entirely negative. According to the Department of Fisheries, Forestry and Agriculture (2011), the forestry industry accounts for 1% of total GDP, a substantial amount. As such, it can be seen that the relationship between Gunns and the state and federal governments is one of interdependence – each relies on the other (Piggott 2011). Mutually beneficial regulations and policies, thus, are a desirable occurrence.

Another example of the positive relationship between the government and Gunns Limited is the termination of the rights to logging native wood in Tasmania, from which Gunns received a $23m payout. This allowed the government to fulfill its commitment to the wider Tasmanian community who wished for sounder environmental practices throughout Tasmania. However, this decision by the government does reveal a potential risk in the political environment that could adversely affect Gunns in the future – though Gunns has great bargaining power, the wider community has more sway over the government. The potential for social backlash causing government regulation to negatively affect Gunns is low due to the increased commitment Gunns is showing to wider society as discussed in the next section, but the chance still does exist that a problem could arise.

For this reason, the outlook for the political and regulatory environment in which Gunns is operating in is neutral with a leaning towards a more likely, but not certain, positive outcome. Correctly managing relations with all regulatory and political bodies is of the utmost importance for Gunns heading into the future.

The sociocultural environment has been of utmost importance to Gunns Limited, with operations interrupted and protested against as a result of 30 years of conflict between the company and wider society. Precedent has shown that companies can be shut down, or at least highly adversely affected because of social pressures (O’Brien 2011).

In the last decade, social awareness of the impact of business on the environment has strongly increased (Golds 2011, Panwar et. al 2006). This sociocultural trend has become an important concern for businesses looking to maximise productivity and competitiveness (Shrivastava and Scott 2007). The significance of this trend in social values is exemplified in the construction of purpose built bodies including the ‘Australian Forestry Standard’ and ‘Private Forests Australia’ which aim to secure a sustainable, environmentally sound future for the Australian forestry industry (Forestry Tasmania 2011).

Previous to the strategic realignment in 2010, Gunns typically ignored social pressures in favour of chasing productivity and profitability gains (Forestry Tasmania 2011, Gunns Limited 2010). This resulted in extensive conflict and climaxed with Gunns decision to withdraw from the native forest industry and instead use certified plantation resources to supply the pulp mill. This decision resulted from extensive discussion with community and environmental groups, and predicated the signing of the Statement of Forest Principles by both parties in September 2010 (Gunns Limited 2011a). This significant increase in the stakeholder engagement of Gunns is a result of the positive consequences that arise from a strategic change that identifies weak points and transforms them into strengths that complement the other core competencies of the business (Astrom et. al 2010)

The decision to attempt to cater more sufficiently to social stakeholders can only reap positive consequences if it is implemented correctly and the sociocultural environment is thus manipulated in a way that Gunns is seen in a more positive light. Gunns commissioned Pox Populous (2011) to conduct a report into the social viability of the planned Bell Bay Pulp Mill that will form the base of the entire Gunns operations. The report found that overall community sentiment was positive based on the opportunities for economic benefits in the form of job creation and value added to the local economy, but there were some concerns that related to custodianship of the environment and greater ethical and social responsibility. In response, Gunns has set up a means of independent monitoring and reporting of social and environmental performance through the multi-stakeholder Project Oversight Comittee (Gunns Limited 2011b, Gunns Limited 2011d).

The increased international demand for Forest Stewardship Council status on all purchases further places Gunns addressing of sociocultural issues as an effective approach, in that it appeases a range of stakeholders.

Gunns has effectively addressed the sociocultural myopia that was damaging the reputation and performance of the company by engaging more openly with the community. This management of the demographic changes the company has undergone has the potential to give the company a strategic advantage (Strack et. al 2008). The company must be careful, however, to not allow future sociocultural forces that are not commercially viable influence the company to the extent that any competitive advantage is lost. The current situation and the addressing of the problem by Gunns exhibits a positive management of this element of the PEST environment, though there is uncertainty in the future. As such, the outlook for this element of the business environment can only be deemed as neutral. 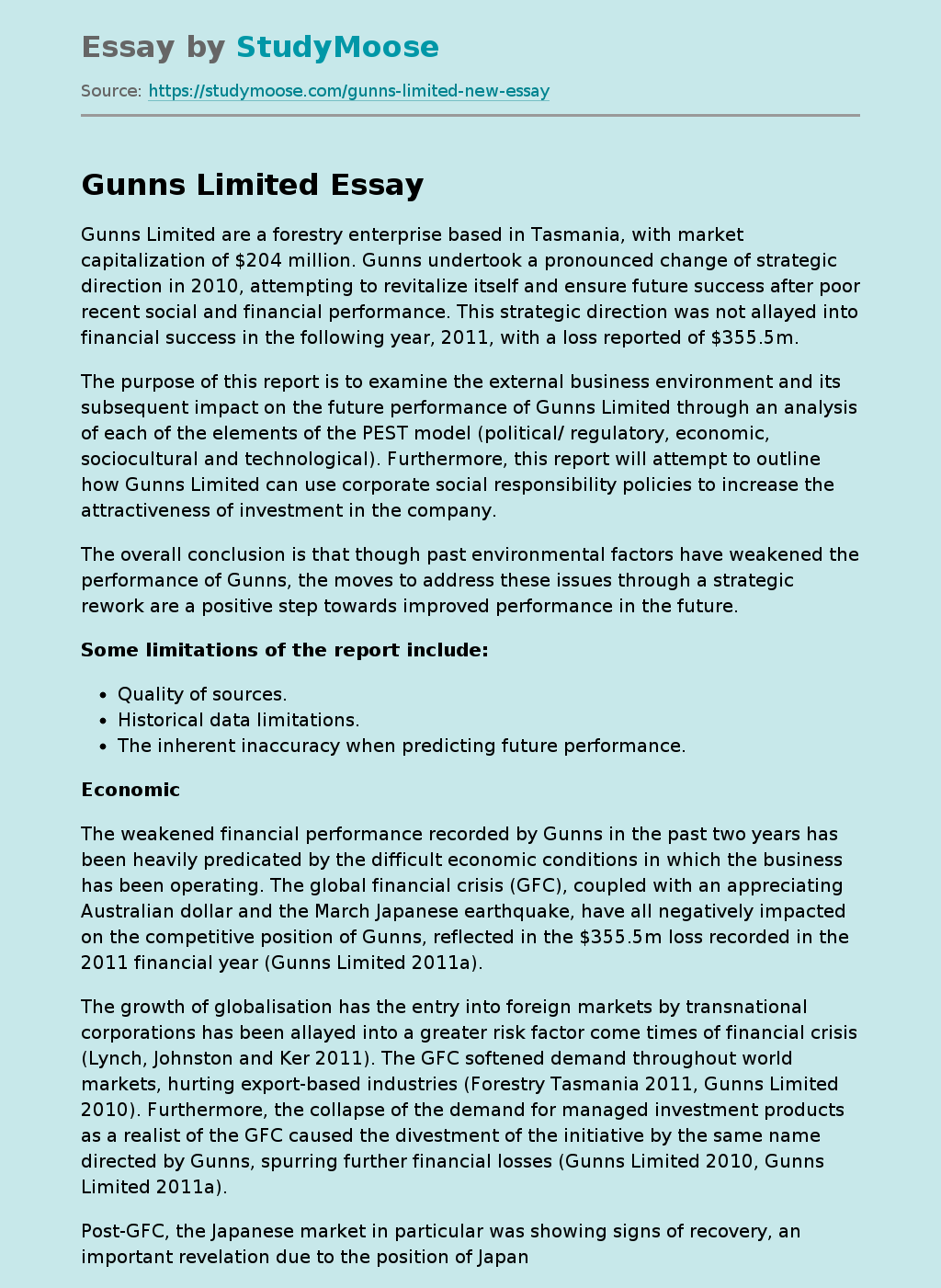