The guest cycle is a flow of business that is measured throughout the entire stay of a hotels guest and by highlighting them in a four stage process, this process simply indicates the where the hotel makes their business from a guest in accommodation.(Knowles, 1998) The four stages can be arguably different between hotels but the four that I have researched would be:

The importance of each guest cycle

1. The pre-arrival stage is when the guest selects a Hotel to utilize.

The guest’s choice is affected by a number of influences such as the guest’s own opinions and experiences in past hotels, the guest is also influenced by certain elements like location of the hotel, and the guest also receives recommendations and even advertising encourages the guest to take a look at a certain hotel due to the attractive advertisement.

Some guests are put off from the hotel when it is in direct contact with the hotels reservations system, for example the guest will be unhappy with a poor quality receptionist or a poor quality website to make online booking or booking over the phone.

Most known issues when a guest is choosing a hotel is description of the hotel, price per night per room and any extra facilities. It is key that when a person phones front office of the hotel that the staff in front office have full knowledge of just about everything in the entire hotel, this could influence the person to choose the hotel due to the standard of deliverance of information from the member of staff.

To make good use of this stage in the guest cycle, a reservations clerk would be wise to keep all reservations on record and thus identifying a certain reservation pattern by analysing “room availability and forecasting rooms’ revenue.” (Knowles, 1998, p.148) Doing this will give the hotel a huge advantage in knowing what rooms they could sell or if they need to apply more in the advertising department. (Knowles, 1998)

2. The arrival stage, this is when the guest first makes visual contact with staff in the hotel and starts their business relationship, it is up to the employees of front office and other departments alike to generate a clear idea of the guests expectations of the hotel and the reasons of visit. This stage usually has the most documents to process such a signing in and registering, finding out and using the customer’s payment method, etc. Front office also needs to stay in constant contact with the house keep department to be able to rotate guests to their rooms efficiently without any delays for the guests.(Knowles, 1998)

3. Occupancy stage, this stage involves keeping the guest satisfied but also enticing them to spend as much as possible within you hotel. Front office has to establish a safe way of securing payment from their guests and most hotels establish a room credit rate that each guest gets unless they pay more room credit than usual, by doing this the guest can roam around free in the hotel charging all meals and other activities to their room within the hotels facilities. This process involves a lot of monitoring and usually involves a nightly audit to insure that all extra charges to the room are accounted for.

The night audit then add all guest information including all charges for the room and outside room activities that are due, to the guest account, finally front office adds this to their accounting records. Most importantly this stage of the guest cycle is the stage that requires the staff to pay full attention to the guest and give the guest the best stay they could possibly have, because this stage is usually when the guests starts deciding if they will ever come back to the hotel ever again.(Knowels,1998)

4. Departure, this is the fourth and final stage of the guest cycle within a hotel, the main service to carry out now is for the front office to take out the guest account and finalise it with the guest and secure a full payment. This is not the only service that the front office does during this stage, front office have to ask if their guest enjoyed their stay at the hotel and if there is any improvement to the hotel that they would like to request, after all the procedures front office finally let the guest be on his/her way with a pleasant goodbye and please come back again soon. For the marketing and sales department it is important for the hotel to information of the guest such as the sign in or registration papers that were given to the guest when he/she arrived at the hotel. The information can give the hotel an advantage in being able to tell what sort of guest they usually have in their hotel, where they come from etcetera… By doing this they will be able to set up a strong strategic marketing base.(Knowels, 1998)

Related Activities & Documents Most activities and documents are usually taken place during what is commonly known as the night audit. The night audit is a process carried out by usually the night porter or night manager; he/she checks the accuracy of the guest accounts that were created by the front office that night after every daily intake of guests. The process involves several tasks (activities) and accounts (documents) to be made note off such as:

* Make a report for the morning staff and manager of the night audit taking into account of the results of all the guest accounts and finances of the hotel after the previous day. (Knowles, 1998) The following is a list of documents that are used throughout the guest cycle:

i. Hotel diary: this is a diary posted up for all front office staff to keep up-to-date with day to day happenings within the hotel, it involves guest information, corrections to account etc… ii. List of arrives: either on computer system or actual written out list of guests and designated rooms. iii. Housekeeping account: up-to-date record of rooms that need cleaning and rooms that are already cleaned. iv. Pre-arrival document: for front office to have an idea of guest that are expected to arrive. v. Departure document: for front office to have an idea of the guest that are expected to check out at checking out time. vi. Night audit document: for front office in the morning to see the total amount that is needed to be confirmed and charged to the guest when checking out.

All activities are to make sure that these documents are followed through, checked and updated every hour to every day. [(Dix & Baird,1998) and (Knowels, 1998)]

Identification of problems encountered by guests (Abbott & Lewry, 1991) Problems encountered by the guest in the pre-arrival stage: I use the above image to help illustrate the problem that guests can encounter in the first and possibly the most important stage in the guest cycle of the hotel industry and that is the pre- arrival stage. As seen in the image the guest chooses to contact our hotel through as many means as the hotel offers such as email, phone, fax etc…The image also shows that the guest could be put off the hotel at almost any moment during the enquiry for the pre-arrival stage, for instance the hotel could be black listed and the guest will look elsewhere, or the hotel front office staff could not sound professional and treat the guest as a second class citizen which could upset the guest and provoke him/her to decide to never contact that hotel ever again. These problems have to be identified throughout the hotel and monitored to make sure such problems do not materialise. (Abbott & Lewry, 1991)

Problems encountered by the guest in the arrival stage

(Abbott & Lewry, 1991) First impressions are generally in the pre-arrival stage when the guest is deciding which hotel to choose but the guest gets more of a detailed first impression when he/she first enters the hotel, this can be influenced by the manner by which the guest is introduced to the hotel by the staff, for instance take a good look at the image I have decided to help portray my point above this paragraph, self-presentation is key when introducing yourself to the guest that arrives to your ‘wonderful’ hotel, if the guest is not satisfied with the level of sevice he/she desire he/she will make a complaint which is bad for business. (Abbott & Lewry, 1991) Problems encountered by the guest in the occupancy stage:

Different systems are used in every hotel to keep track of the guest’s activities within a hotel, it all depends on the system you choose for your hotel and how reliable it can be, nothing can be worse than an unreliable system. For example if the guest is using all the facilities your hotel has to offer and is charging it all to his/her room, and then all of a suddenly your automated system does not keep track and you could lose some serious money due to such a fault in your system. Making first impressions last is another hard job for the hotel; it’s not only being friendly when they arrive but its making sure their guest is 100% satisfied all the time. (Abbott & Lewry, 1991) Problems encountered by the guest in the departure stage:

The departure time depends on the size of the hotel, given that the hotel based in this question is a medium sized hotel with a 128 rooms the front office desk should be fairly busy at checkout times, usually a big queue is formed which starts to agitate the guests, because of this the guest then is most likely to give a bad review of the hotel if given the chance to. (Abbott & Lewry, 1991)

Suggestions to minimise/eliminate such problems: For the pre-arrival stage; as based on the above problem faced by guests, a hotel can do certain things to make sure they do not suffer such problems with their guests. If the guest could be easily put-off by staff answering phones or any guest questions without a professional manner, then the managers of the hotel should make sure they train their staff to a respectable social standard to be able to communicate to the guests with out guests being put-off by the hotel staff. (Abbot & Lewry, 1991)

For the arrival stage; much like the pre-arrival but with slight differences because the staff now have to prove to the guest that they not only sound and look professional and organised but truly are professional and well organised, so that when the guest arrives the manager of the hotel has set out clear tasks that the front office staff follow like a rule book. In my own experiences in a 4 star hotel in Dublin, when the guests arrive the front office staff would make their guest confortable in the guest lounge to have some tea or coffee while they staff send up their luguage to the room while the guest takes their time registering. (Abbot & Lewry, 1991)

For the occupancy stage; as said above automated systems can cause some trouble in hotels so the manager would have to communicate with the other depatartments possible do this during the night audit when all the finances and guest accounts are being checked that way even If the system as missed something the manager and staff alike wont. (Abbot & Lewry, 1991) For the Departure stage; departing the hotel with a huge queue is totally unnecessary these days, as it is possible for the manager to set up a fast checkout system for guests, usually slower for new guest but for frequent guest or corporate guest check out is as simple as handing in the keys.(Abbot & Lewry, 1991) 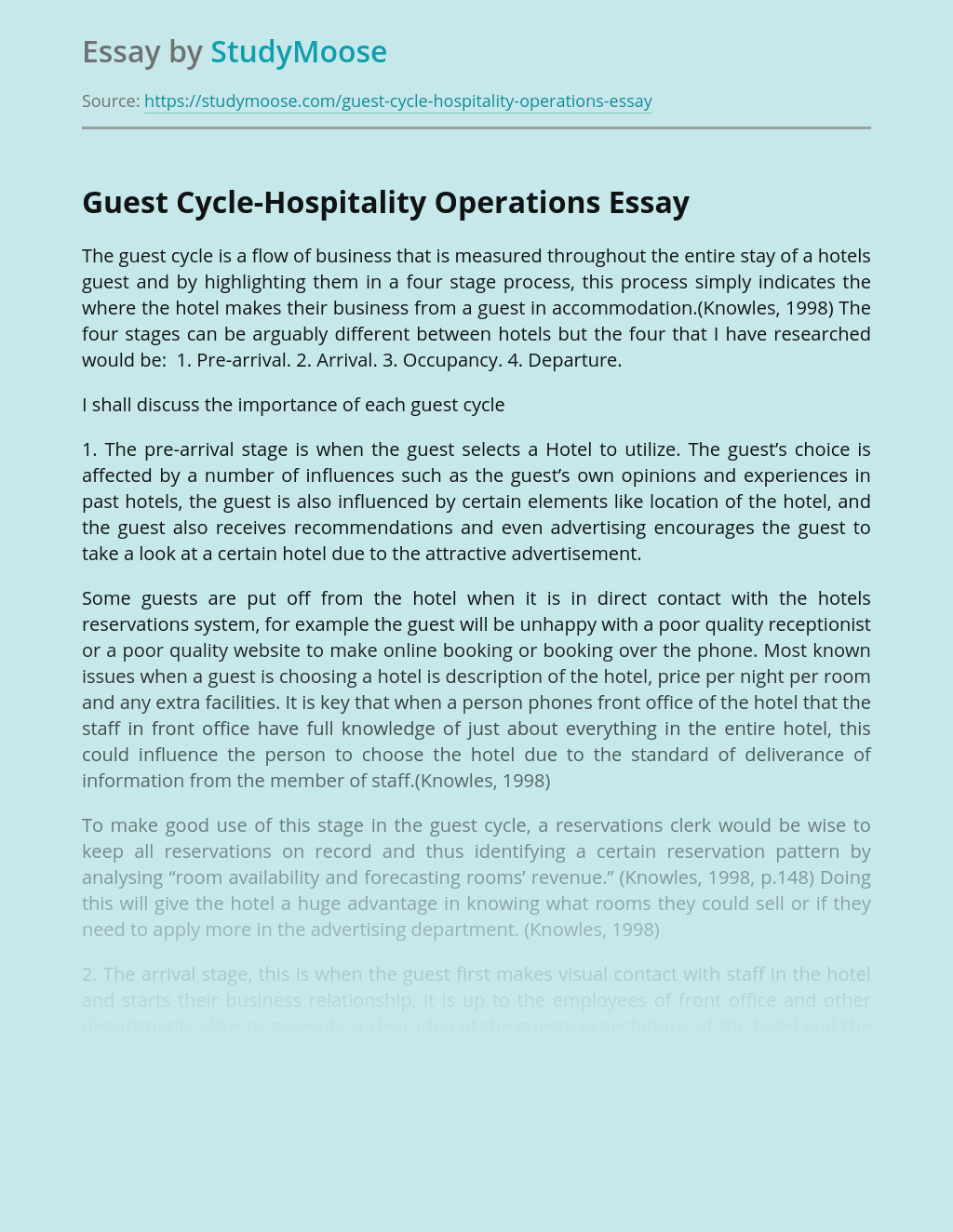