She had not suffered much. Her death came and went quickly. Michelle was dead, gone forever at the blink of an eye. As her husband looked over her body at the bottom of a 65 foot sheer precipice, many ideas and emotions fluttered in his mind. Renato Rosaldo describes his experience at the site of the fatal accident, overlooking the body of his lifeless wife, Michelle Rosaldo: “I felt like in a nightmare, the whole world around me expanding and contracting, visually and viscerally heaving (476).

” Although at the time of the tragedy and many months after, Renato Rosaldo found himself in an almost delusional state of grief, the calamity helped Rosaldo reach a state of enlightenment with his study of the Ilongot tribe.

Michelle and Renato Rosaldo had studied the Ilongot tribe in the northern part of the Philippines as anthropologists. Renato Rosaldo’s past attempts at understand the Ilongot’s reason for head hunting, “rage, born of grief,” had failed using his method of hermeneutics.

The conclusions Rosaldo drew from this explanation were, at best, educated guesses. Trying to be objective to his study of the Ilongot tribe, Rosaldo could not understand the driving factor behind killing a fellow human as a way of dealing with the loss of someone close to you. What he later started to understand was that the ritual was something that could not easily and readily be described.

It was not until the time of his wife’s death that he could comprehend the force of anger possible in bereavement.

The force was so strong within him that drawing parallels with the ways Rosaldo’s own culture had molded him into dealing with bereavement started to overlap with the Ilongot way. This emotional force became the key in helping Rosaldo unlock the mystery of this rage via bereavement, and unfortunately, it could only come at the price of Michelle Rosaldo. Renato Rosaldo’s explanation of why the Ilongot used head hunting as a way of dealing with bereavement is compelling due to his understanding of emotional force through his own personal experience.

After the loss of his brother, then four years later, the loss of his colleague, friend, and wife Michelle Rosaldo, Rosaldo experienced bereavement and the emotional force that accompanies it first hand. Spending months grieving, Rosaldo’s insights on the topic of head hunting had changed dramatically. Shortly after his wife’s death, an excerpt from his journal concurs with the change of perception of the Ilongot people.

My journal went on to reflect more broadly on death, rage, and headhunting by speaking of my ‘wish for the Ilongot solution; they are much more in touch with reality than Christians. So, I need a place to carry my anger – and can we say a solution of the imagination is better than theirs? And can we condemn them when we napalm villages? Is our rationale so much sounder than theirs (478)?

Rosaldo’s experience with personal bereavement left him with a sense of what despair and rage could conjure up in the human being. Wishing for the Ilongot solution himself, Rosaldo finally realized that the Ilongot were not as different as he had originally thought. The emotional force Rosaldo had felt has the same core as the force that pushed the older tribesman into a headhunting raid. Rosaldo’s comparison of his solution of the imagination and the ritualistic headhunting had rage as the common seed.

Rosaldo’s initial attempts to find what drives the older Ilongot men to headhunt using traditional ethnographic methods failed. Renato and Michelle Rosaldo played a tape of a headhunting celebration five years prior, evoking great emotion from the crowd of Ilongot because the celebrator on the tape had already been deceased and headhunting was now forbidden. “The song pulls at us, drags our hearts, it makes us think of our dead uncle…Leave off now, isn’t that enough? Even I, a woman, cannot stand the way it feels inside my heart…At the time I could only feel apprehensive and diffusely sense the force of the emotions experienced…(473-474).”

Rosaldo’s emotional detachment from the man speaking on the tape recorder prevents him with identifying with the Ilongot tribesmen. This lack of emotional connection is understandable, as Rosaldo himself was obviously not as close to the man practicing the ceremony as his family. This understanding of the rage and sorrow that the Ilongot members had felt during the listening is a crucial element of how the dynamic between bereavement and sorrow function.

Rosaldo understood that his analysis could easily be brought under fire due to the tying in of personal experiences during his ethnography of the Ilongot culture. Rosaldo concurs that there is potential for risk by saying, “Introducing myself into this account requires a certain hesitation both because of the discipline’s taboo and because of its increasingly frequent violation by essays laced with trendy amalgams of continental philosophy and autobiographical snippets (475).” The possibility for an anthropologist who brings personal experience into an analysis of a foreign culture to become too self absorbed is always possible.

Rosaldo avoids this frequent ethnographic infringement by separating self righteousness from applying personal experiences for comparison in anthropology. Rosaldo claims that his and all interpretations are provisional, stating that “they are made by positioned subjects who are prepared to know certain things and not others (476),” which presents that he only began to fathom the force of what the Ilongot’s had been describing as the anger held because of bereavement.

Although some would argue that the risks with mixing emotion during anthropological study are too great, total objectivity can not always provide a complete analysis. Although being objective and getting the factual aspects of rituals and cultural symbols provides great insight of a culture and its formal procedures, it does not necessarily give the ethnographer the true experience of the event; let it be bereavement or something else. The true meaning behind many events and cultural symbols that are looked at objectively are really quite open to interpretation.

Who is to say that what the ethnographer interprets as being one thing, in turn, does not represent something totally different for the subject actually being studied? Although it is not true for all cases, bereavement and the emotional forces that are its byproduct can only be successfully analyzed and interpreted when the observer’s experience overlaps or parallels that of the subject’s. Rosaldo later found his own experience overlapping that of the Ilongot’s.

After suffering through not only the loss of his young brother’s life, but the loss of his wife’s, Renato Rosaldo’s view of headhunting had drastically changed. Although Rosaldo had spent fourteen years attempting to conclude the actual drive behind the Ilongot murderous ritual using current anthropological methodology, in one swift moment, he had felt the drive within himself. This emotional force had left him seeking for the Ilongot solution. Realizing that this rage within him had pieced together the ethnographic puzzle of the Ilongot headhunting, Rosaldo masterfully avoided becoming too self absorbed while giving his account of the Ilongot ritualistic beheading. Rosaldo posed the question, “Do people always in fact describe most thickly what matters most to them (470)?” After review of Rosaldo’s essay, one will most likely conclude that the answer is no. 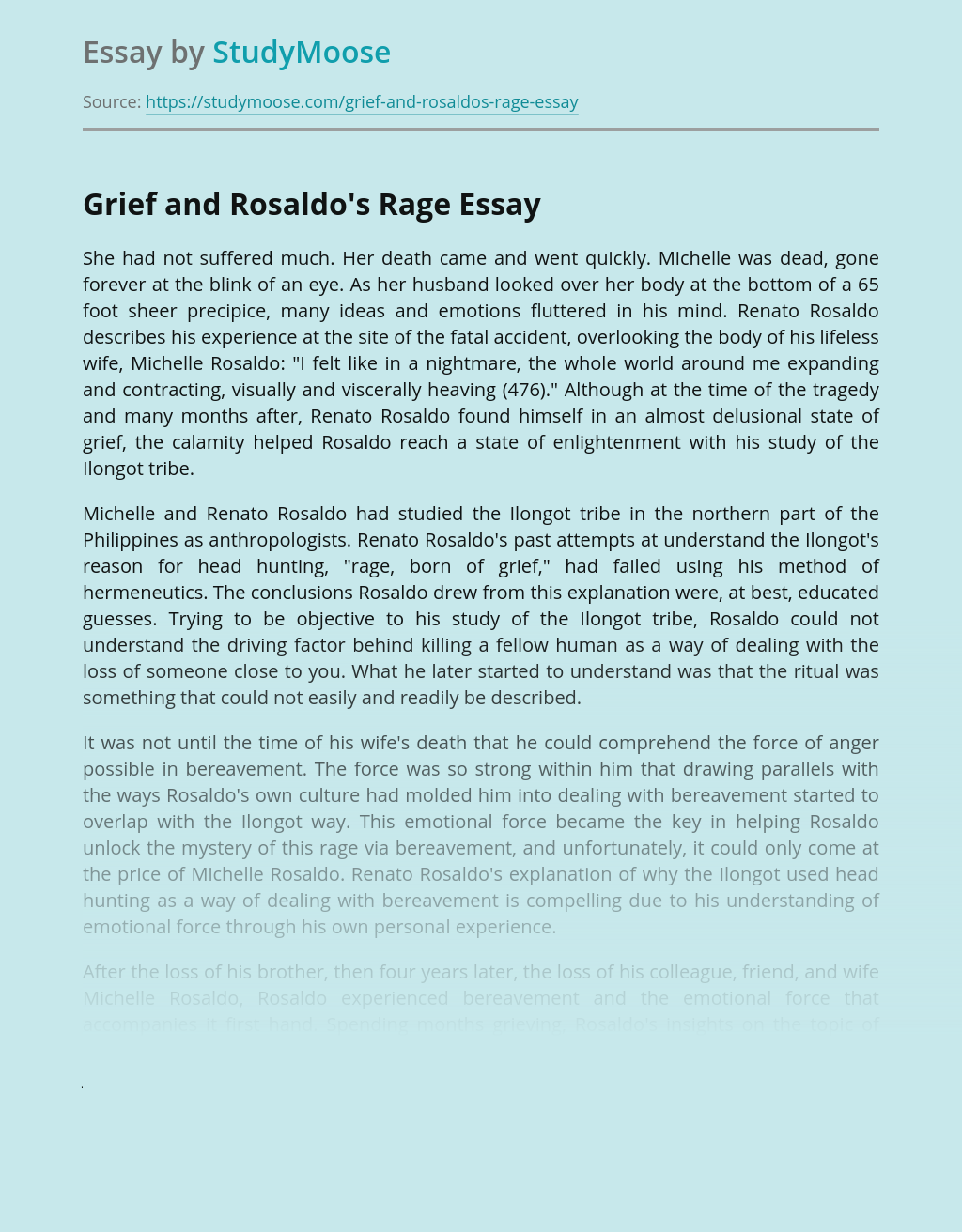 Don’t waste time
Get a verified writer to help you with Grief and Rosaldo’s Rage
Hire verified writer
$35.80 for a 2-page paper
Stay Safe, Stay Original