Throughout the novel Grendel goes back and forth between the two beliefs nihilism and existentialisms. Through the journey of figuring out the belief in life, he struggles for being a cultural outsider. Gardner makes it tough for Grendel to make a decision because just like Grendel there are other cultural outsiders like the Dragon who shares his philosophy with him. Philosophies of life have a wide variety for people to choose from like in Grendel by John Gardner.

The main character, Grendel, travels on a journey of self-discovery, eventually becoming a nihilist, and by the hero Beowulf was defeated.

Don't use plagiarized sources. Get your custom essay on
“ Grendel’s Self Discovery ”
Get custom paper
NEW! smart matching with writer

Grendel struggles with his own meaning of life between “being” and “nothingness. ” With influence from others like the Dragon, Beowulf, and the Queen, Grendel switches between beliefs based off two philosophers named Jean-Paul Sartre and Friedrich Heinrich Jacobi. The philosophy that is existentialism is “a philosophical movement which exercised an influence on many of the arts as well as on philosophy and psychology.

The belief in people have free will and can choose what they want to be is in other words what existentialism. Existentialism was a philosophical movement that dealt with the ideas of the way of life by many philosophers such as Jean-Paul Sartre. Sartre did not agree with traditional arguments of human nature he argued that in the case of human beings “existence precedes essence. ” In his famous quote, the meaning is that humans have no set or fixed nature that determines what they will do.

After leaving his mother’s cave, he is free to an entirely different world, a world of humans and other creatures, “I played my way farther out into the world… cautiously darting from tree to tree challenging the terrible forced of night on tiptoe.

”(16). As a defense against the rest of the universe, Grendel establishes existentialism as his philosophy. Grendel discovers that the creatures that he watches share a common language and thought. This is when Grendel meets characters like the Shaper and Hrothgar, both of whom help shape his early belief of existentialism.

In a way, you can look it as binary opposition because nihilism could be evil and existentialism could be good. In Grendel, Grendel comes in to the presence of the Dragon. Through his conversation with the Dragon, Grendel is taught nihilism. The Dragon believes that all things in the universe will end and are therefore meaningless and discounts existentialism as a philosophy and nihilism as the absolute truth. The idea that nothing lasts forever and will die is the philosophy of the dragon, “The beginning, the present, the end. All time, all space. (62, 63)

The Dragons conversation pursues Grendel on his philosophy of life that everything comes and goes “In a billion billion billion years, everything will have come and gone several times, in various forms” (70). These two different philosophies dictated Grendel’s life from start to finish. He was neither truly Nihilistic nor Existential, because he was a creation of both. His early experiences led to an Existential belief and his later ones a Nihilistic one. These conflicting ideas ultimates led to his ultimate peace, “Is it Joy I feel? ” and his ultimate destruction. (173) Or are they the same thing? 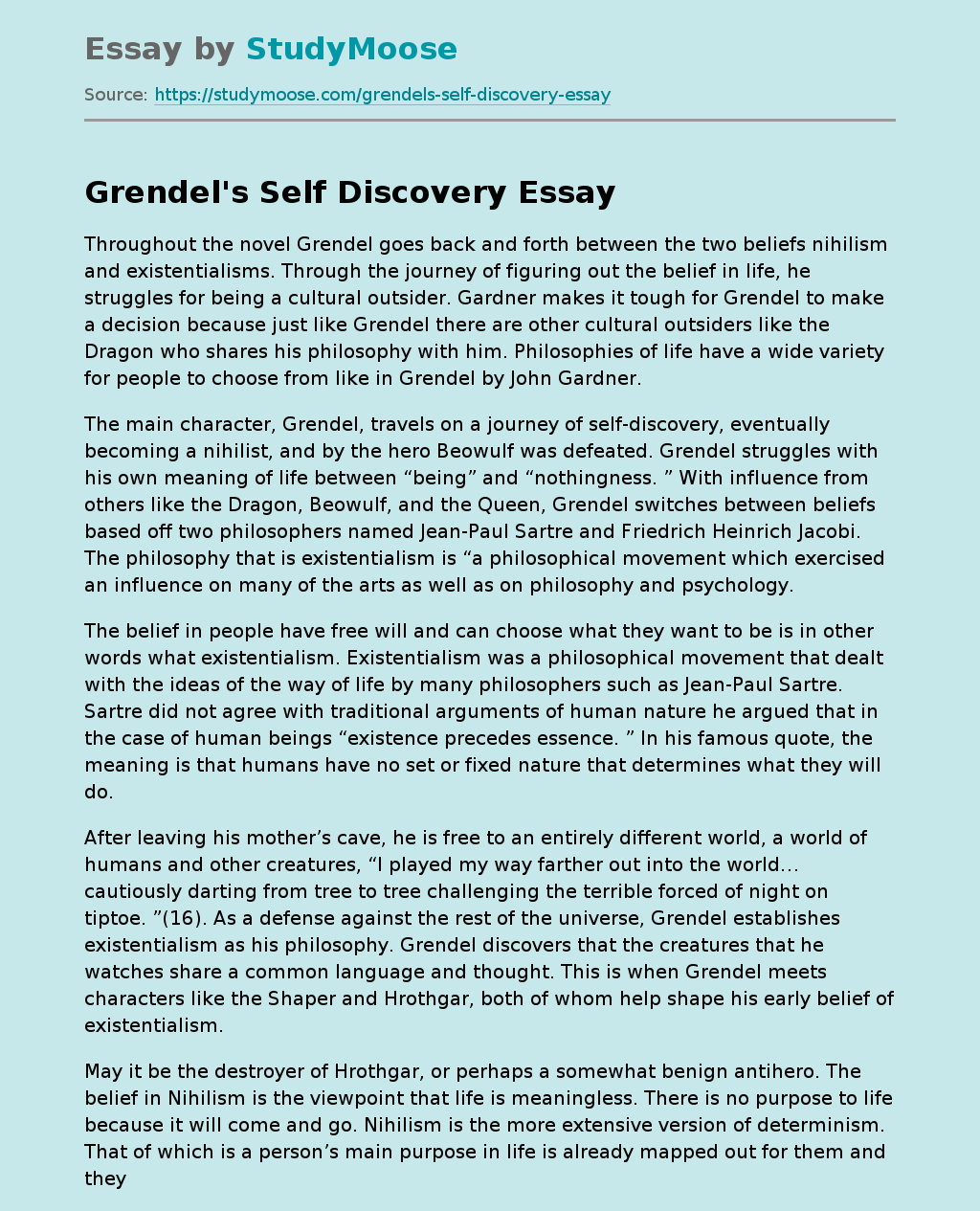