Don't use plagiarized sources. Get your custom essay on
“ Green Technology ”
Get custom paper
NEW! smart matching with writer

What is the future of going green?

This is a review of green technology which focuses on these six questions. What is green technology? According to the articleshub. org (2009) the term “technology” refers to the application of knowledge for practical purposes the field of “green technology” encompasses a continuously evolving group of methods and materials, from techniques for generating energy to non-toxic cleaning products. What advantages and disadvantages does green technology have? The advantage of using green energy sources is that it is clean so it does not emit anything harmful into the air which has an impact on the environment.

It is also renewable which means we will never run out of it unlike oil which is expected to dry up in a decade or so. (Elise, M. , 2010) Disadvantage of green energy source is the amount of produce electricity, how much it can generate is not consistent. This is because we have no control of the weather so if a certain area relies on solar energy and there is a weather disturbance, it will not be able to convert sunlight into electricity.

Another disadvantage is the fact that some of the green energy sources cannot be installed in certain areas of the planet.

For instance, wave energy can only be utilized if the waves coming from the ocean reach at least 16 feet. The use geothermal energy can only be done in geologically unstable parts of the planet. (Elise, M. , 2010) What are the important focuses of green technology? The most important focus of green technology is changing the production and waste patterns This method is the process of throwing out old methods of production and waste that harm the environment, and creating new ones that produce the same result. Another important part of green technology is innovation. Nvudev. org, 2012) Nvudev. org (2012) stated “there is new innovative and alternative technology that does not harmfully affect the environment or its people.

Think of green technology as taking the planet earth back a couple of centuries, when a simpler form of survival existed. Technology like this can only be beneficial to the planet. Green technology is the new wave of today’s society. To ensure that planet earth still exist one hundred years from now, education in “going green” is essential. The key to this type of technology and way of life is making it sustainable for everyone over a long period of time.

According to (Schoof, 2012) Green Technology can be profitable. “The United Nation in a large institutional investors meeting at a conference stated climate change is a risk to avoid and also the opportunity to make good return on investments. The investors, who control more than $20 trillion worldwide, are looking at climate change from a business perspective even as Washington steers clear of the issue. Clean energy investments worldwide grew 5 percent in 2011 over 2010, despite financial turmoil in Europe and a wobbly economy in the U. S. , according to a report released”.

Global clean-energy investments reached $260 billion in 2011, about five times more than the $50 billion in 2005, according to a Bloomberg New Energy Finance report. (Schoof, 2012). In the US, only 7% of green energy sources are used nationally. This was much higher 11 years ago. We have to invest more in this clean green energy technology. We can get it from green energy sources such as biomass, biodiesel, geothermal, solar, water and the wind. These are things we have all around us and all it takes is for someone to harness it instead of relying on traditional non-renewable means to produce energy.

Schoof (2012) believes “Globally, solar attracted much more investment than any other source of renewable energy. GE invested $5 billion in research and development in clean energy and efficiency technology. If solar energy is being used and the sun is covered, the emergency generators will be activated and use up the energy that was stored from previously sunny days”. According to the green technology and global market (2012) BCC Research predicts that the global market for energy-efficient technologies will grow at an aggregated compound annual growth rate (CAGR) of 9. % for the 5-year forecast period of 2010-2015, from $200 billion in 2010 to $311. 7 billion by 2015, compared to $331 billion for renewable energy.

What are the important facts about using green? By using green energy, wind, solar, geothermal, hydropower, those sorts of things, those are what we call different types of green energy because they are non I’m going to call them non-invasive because they do not disrupt our environment, they actually help to improve it by not creating CO2 emissions and that’s where were going.

If wind turbines need more space, they can be installed near the coast instead of putting these on land. (Elise M. , 2010) According to Elise, M. (2010) a study shows that you can generate more electricity while these are placed out in the ocean water. In fact, research is ongoing to try and harness other means to generate the power we need. Power is generated by harnessing the different temperatures in the water. It is currently being used on a small scale both in Japan and Hawaii however if may have a lot promise. There are different types of green energy.

Green energy is directly related to green energy resources. One of the green energy resources alternative resource, alternative energy renewable is hydroelectric or hydropower, simply water being used to generate electricity. Solar has been used on a small scale for decades. Today solar is now use on a large scale for homes, industry, and buildings. (Young, 2009) Green technology is a system that incorporates the new and innovative methods and materials used to create more environmentally friendly cleaning products. The expectation with technology like this is to change the daily habitual habits of society.

Green technology focuses on household cleaning products, waste, inventions, clothing, energy sources, etc. Many focus points make technology like this sustainable. (nvudev. org, 2012) In order for green technology to have an impact on the environment for the long term it must be sustainable for everyone every day. Sustainability refers to the use of new technologies in a way that will not harm the planet. Green technology researches new ways to use our natural resources without depleting them, and without making it harder for future generations to survive. (nvudev. rg, 2012)

What is the future of going green? Technology like solar power and the use of new fossil fuels play a huge part in energy efficiency. Perhaps the most innovative section of green technology is green nanotechnology. This technology refers to the use of both green chemistry and green engineering to perfect the whole notion of going green. If solar energy is being used and the sun is covered, the emergency generators will be activated and use up the energy that was stored from previously sunny days. (Elise, 2010) The future concerning green computers have taken technology to the next level.

Green computers are considered environmentally sustainable and eco-friendly. This system of green computers consists of energy efficiency, cost, recycling ability, and environmental sustainability. That’s a lot of energy to use for such a little task. Many companies are working on new and innovative ways to improve computer technology. This is known as green computers. (nvudev. org, 2012) Companies like Dell, Microsoft, Asus, and Gateway are all turning to green computers for the 21 century. The most efficient green computer out of these is the Asus EEE, then the Dell.

The dell green computer is already ready for distribution in large numbers. Green computers are smaller, more energy efficient and recycle ready. (nvudev. org, 2012) In my conclusion I have learn that Green Technology is based on the premise that businesses have a responsibility to satisfy human needs and desires while preserving the integrity of the natural environment. There are significant indications that environmental issues will grow in importance over the coming years. Long-term sustainability of the planet is likely to require some rather distinct changes in the ethical behavior of its human population.

In the short term finding new ways to incorporate technology and carry on exchanges with greater concern for environmental goods and services offer particular promise. Green Technology and the promotion of responsible consumption are part of that solution. There are many things in this world that are ever evolving in technology, from vehicles, television, cell phones, and even green technology. Some of us might not be too familiar with green; however, most people use green technology without even knowing the difference. 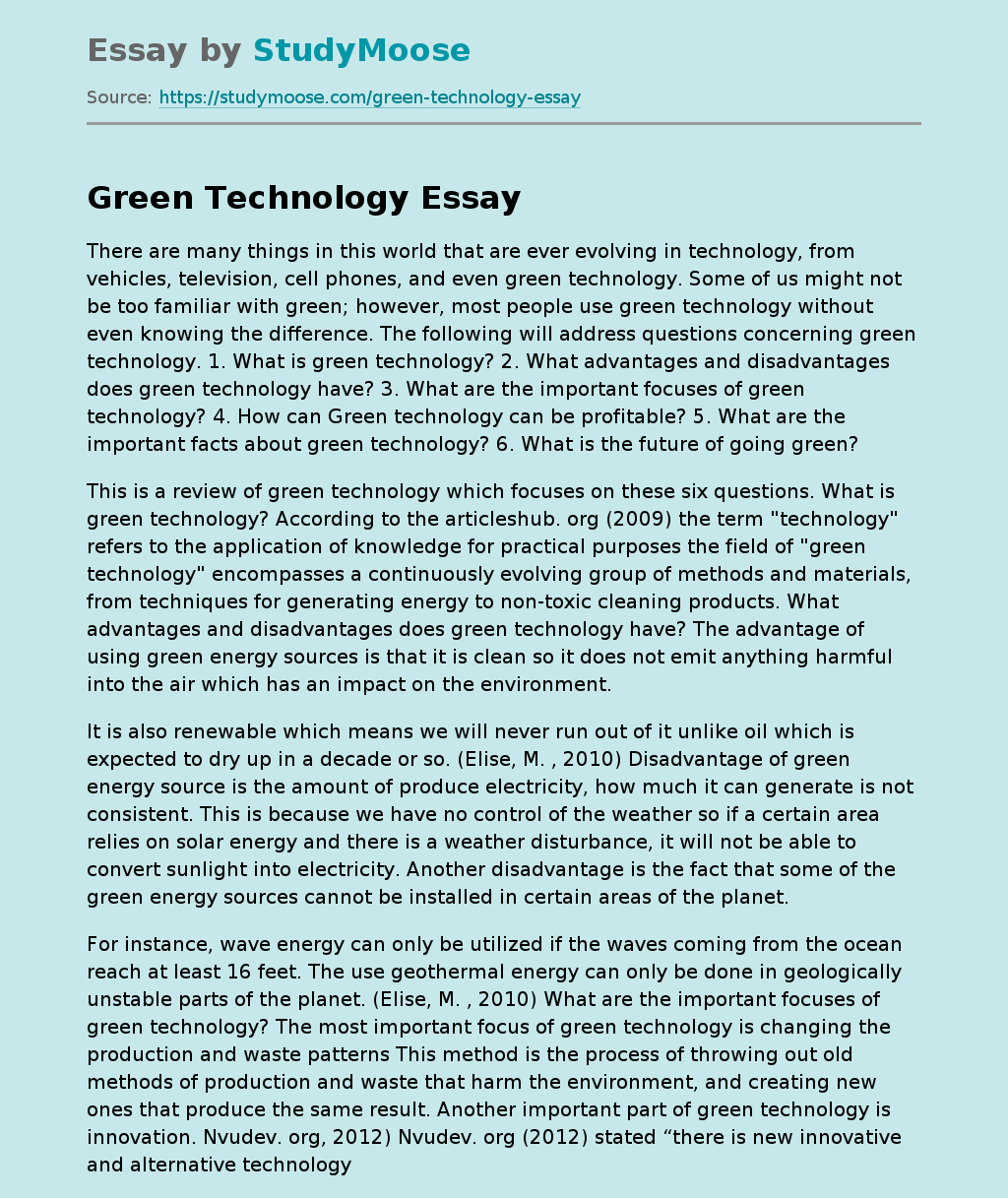