Grades do not Reflect Intelligence

As young adults we have been tested many times over the years, whether it be by a parent, friend or life itself however, the most common of tests we receive are from school. Growing up we were taught to believe that A meant smart and F meant dumb. Time and time again this caused distress in students who were very smart but declared dumb by the education system. Contrary, students who were receiving higher marks are not necessarily the most intelligent.

Don't use plagiarized sources. Get your custom essay on
“ Grades do not Reflect Intelligence ”
Get custom paper
NEW! smart matching with writer

Eventually, people came to the realization that the marks received on tests in fact were not an accurate representation of ones intelligence but merely a showcase of their ability to memorize information. Firstly, the education system does not properly reflect ones intelligence due to common inflation of marks.

Secondly, while we are all different, the education system provides us with the same learning and thirdly, grades are the result of effort not intelligence. As the years pass the entry level for most elite university programs rise and are currently well over 90 percent, as a high school student this can be very discouraging.

Students are under an immense amount of pressure to do well and this rubs off on the teachers. More often then not teachers are faced with the pressure from students and parents asking or even demanding higher grades, many times they often ascribe any lack of high marks as the teachers fault. Coincidently, as of 2007 more than 60 percent of Ontario high school graduates had an A average, and 10 percent had an A+ average.

According to Western University professor James Côté that’s up from 40 percent in 1980. (Authority) In todays society many are obsessed with the best, resulting in many parents wanting to send their children to the best schools.

This ultimately leads to schools feeling pressure to maintain their supreme standing. Many schools use the success of their past students to enhance their title. For both these reasons listed, inflation occurs. Schools and teachers are raising the marks of their students to their benefit. Of course they are just trying to help however, more often than not they are doing the complete opposite. According to a 2010 report from Brock University, students who entered university with a 90 percent or higher average in high school experienced a dramatic drop of 11.9 percent. Whereas students with high school marks in the 60-79 percent range only dropped 4.4 percent. (Statistic) Grade inflation does not truthfully assess students learning, resulting in greater problems for their future. With the common act of inflation it is hard to decipher the difference in learning abilities between students.

As human beings we are all diverse, not one an identical copy, now if this is the case why does the education system treat us like we are? (Rhetorical question) The education system has made some improvements over the years by dividing students based on their learning but there is much more work to be done. In high school there is a lack of diversity in available courses. There are a multitude of academic courses and very little courses related to apprenticeships and trades. High schools push and push for students to take these academic courses and follow suite to university, when the reality is not everyone is meant to go to university, and that is not a bad thing. However, the truth of this is being concealed by all the grade inflations and false hope given to students.

After high school many students will come to the unfortunate realization that just because they did well in high school does not mean they will do the same in university and the high school education system will be to blame for that. If high schools represented college in a more positive way, many students would feel more comfortable and confident in taking the appropriate courses to accommodate to their learning needs. In reality, many students aren’t even aware that they have so many more options outside of these academic courses because the high schools are not making them available. This results in students who learn differently to be put in the same classes and tested the same ways, resulting in one being smarter than the other, when this is in fact not true.

Albert Einstein once said, “Everybody is a genius. But if you judge a fish by its ability to climb a tree, it will live its whole life believing that it is stupid.” (Authority) Therefore, high schools should not test all students equally, but take the time to adhere to their learning abilities and follow suite with appropriate courses and testing. In addition to every student being completely different, it doesn’t help that there are so many of us. There are 105 secondary schools in the Toronto District School Board alone, meaning there are approximately 87, 273 students, and 5, 800 teachers. (Statistic) Now in this whole system of people, one can’t help but wonder, is my A+ the same as you’re A+? (Rhetorical question) If Sally is an intelligent student who doesn’t try hard at all and is managing to pass with B’s and Julie is at a lower intelligence level but working her butt off to turn her C’s into B’s does this mean these grades are equivalent? (Example) Do these grades communicate anything about Sally and Julie’s intelligence, or are they merely a showcase of their efforts? (Rhetorical question)

Grades are important yes, but they cannot determine ones intelligence. Grades show teachers how well you are able to retain information; they are an example of who sat down, put the effort in and studied and who didn’t. Yes, it may be easier for an “intelligent” person to get good grades, but someone of mediocre intelligence can also get good grades with hard work. High schools make test marks out to be everything, when in reality, as stated before; they are not an accurate representation of ones intelligence. Just because John got perfect on a math test and Billy didn’t, does not mean John is smarter, it means they excel in different areas and should be treated accordingly. Time after time many students will find themselves discouraged by their low marks, but that does not have to be the case. With the right amount of effort, and the right guidance everyone has the opportunity to be a genius.

It is now time for the education system to put their best foot forward and conjure the effort to make this happen. In conclusion, it is evident that high school grades are no longer an accurate representation of students’ intelligence. Grades are inflated, students who are at completely different ends of the spectrum are getting the same tests and effort now differentiates most students’ grades, how can one possibly believe that this system accurately demonstrates the knowledge of our youth? (Rhetorical question) High schools need to develop a system that can evenly show case everyone’s intelligence. Until that is done, high achieving students will keep being told their brilliant and low achieving students will keep being pushed from, grade to grade. Overall, the question still remains, if academics cannot determine our intellect, what is the true test of intelligence?

Grades do not Reflect Intelligence. (2016, Apr 01). Retrieved from http://studymoose.com/grades-do-not-reflect-intelligence-essay 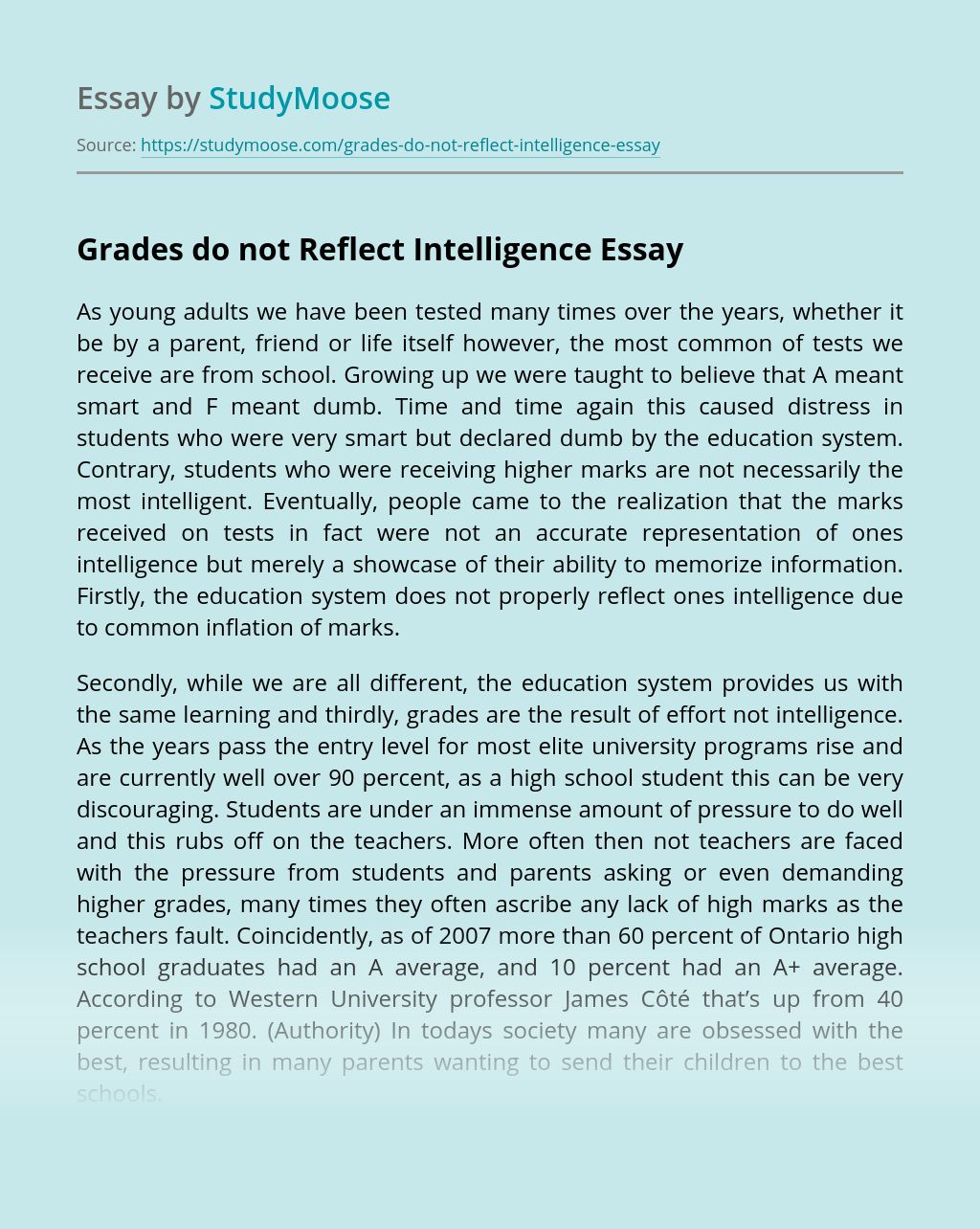