Google is the most popular search engine that the world uses on an everyday basis. Sergey Brin and Larry Page created Google in 1998. What started out to be a small search engine and ranking system are now the worlds most profitable Internet companies of our time. Google has created many products today that have changed the world of technology, products such as Google+, YouTube, Android, Motorola Mobility, the Nexus 7 tablet computer, Google Wallet, and Google Glass (p.470). Google is qualified as one of the best companies to work for (p.

Don’t waste time
Get a verified writer to help you with Google: The Quest to Balance Privacy with Profits
Hire verified writer
$35.80 for a 2-page paper

465). With that being said, I believe Google can take all the resources it has to create files of the users private information it gathers, and place it into different folders that can be locked and protected.

Do you feel there is any way Google can respect privacy and yet still maintain its profitability? I believe that Google can respect its privacy yet still maintain its profitability but Google, will be dealing with the battle for quite some time. According to the text, Google relies on tracking along with other activities to maintain profitability, it has large stake in the privacy issue (p.471). Google has been working on updating their privacy policy to better comply with what the users want when it comes to their private information. In 2012, Google revamped their privacy policy and combined all its information it gathered from its users from the different Google services. Google drafted a 13-page letter answering all government questions (p.469). Google states that all users have the option of turning off certain features that collect users information. The new policy also states that it would not impact the amount of data it gathers or deletes and that it remains highly committed to user privacy (p.469).

If Google can continue to follow this new policy where it commit to its users privacy and not have it clash with its profitability then Google users will be happy. Majority of Google users just want to make sure that when they use the Google search engine, their private information is secured and not leaked to hackers. Google has the power to respect its privacy and maintain its profitability by keeping the two issues separate. What are some of the effects government regulation of the Internet might have on Google’s operations? Since Google is a multination, it has numerous amounts of rule and regulations to abide by depending on the country’s laws and legal requirements. Google understands that what can be legal in one country may not be acceptable in others (p.470). Government regulations that effect Google’s operations are Google operating in China, Google tracking its users, and surpassing its privacy policy.

China’s government is very strict with the Internet. When Google entered China, it was a great opportunity but came with many rules and regulations. The Chinese government blocked many cites Google offered, cause an abundance of problems with Google’s search engine. Google left the Chinese market due to a lot of pressure and hackers and moved its platform to Hong Kong (p.466). Another issue government regulations of the Internet have on Google’s operations is its tracking problems and privacy violations. Recently Google went against its settings with the Safari Browser and in the U.K., it had scanned data from users wireless networks.

Google used ways around the system to track their users from Safari and how Google gathered private information in the U.K., was from their special detection equipment that was used in the vans for its location-based services (p.467). Being such a large company that Google is, understanding all rules and regulations is not an easy task. Though Google paid all of its fines for the violations it made, Google still has to abide by their policies. By doing so Google, will need to take a closer look into its services and making sure it meets all standards depending on the country.

Google: The Quest to Balance Privacy with Profits. (2016, May 05). Retrieved from http://studymoose.com/google-the-quest-to-balance-privacy-with-profits-essay 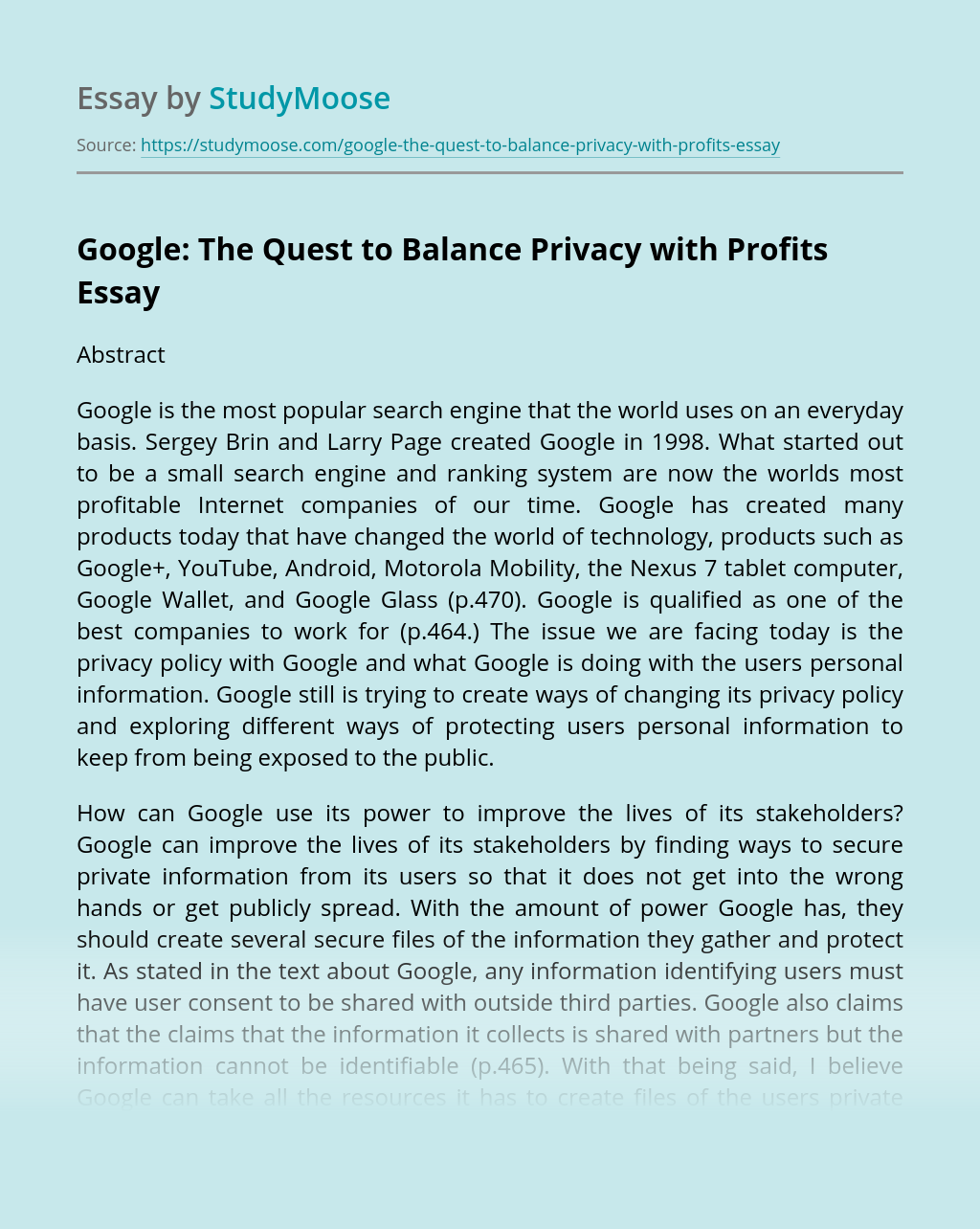 Don’t waste time
Get a verified writer to help you with Google: The Quest to Balance Privacy with Profits
Hire verified writer
$35.80 for a 2-page paper
Stay Safe, Stay Original