Good Night and Good Luck is a movie that tells the story of McCarthyism and the media campaign against it. Edward R. Murrow is described as the protagonist fighting against the evils of this man and his campaign. The greater message of the movie is the use of media. The ethical question posed is, what place does television have in society? At its conception, there was a debate. Was television merely an apparatus for entertainment or was it to be used to dispel information? The foreshadowing regarding today’s use or rather abuse of the media is sad to say the least.

Don't use plagiarized sources. Get your custom essay on
“ Good Night and Good Luck ”
Get custom paper
NEW! smart matching with writer

As Murrow makes his appeal for television to be used to elevate the masses rather than turn them into dribbling fools, one can’t help but see the irony. As McCarthy is taken down by the power of the media, the viewer can’t help but wonder, what about today’s “McCarthys”? Who will take them down? Artistic Point of View The film is directed and written by George Clooney.

Obviously this gives the production a liberal slant. In a Salon interview on September 16, 2005 he compares the plight of the accused to the political situation of today.

“The question was never whether or not these people were spies; the question was whether they were allowed to face their accuser or not. And I find those to be extraordinarily relevant today, those issues. ” His artistic view point was intended to demonstrate the use of media and its power. His point was to show not that Murrow did or did not do the right thing, but rather that he was a voice for those who had their voices taken away.

That’s how he (Murrow) chose to use the media, productively not for entertainment. The all-star cast, including Robert Downing Jr.

, David Straithairn, Clooney and Patricia Clarkson (just to name a few) portray this subject with dignity and class, as the story unfolds to the talented vocals of Diane Reeves. It is shot in black and white which lends to the authenticity of the story. Straithairn’s award winning role is done with such care that to compare his newscasts to the originals, one sees little difference. Critique Roger Ebert says the movie creates a clear message about the place of media and its power. He also applauds Clooney’s use of black and white to highlight the period’s character.

Dave Ansen at Newsweek echoes this. “It’s passionate, serious, impeccably crafted movie tackling a subject Clooney cares deeply about: the duty of journalism to speak the truth to power. ” Indeed, this movie attacks its subject with depth and understanding. Clooney poses these questions to the viewer to make them question themselves and their own values. Why do we watch television? Is it a sad commentary on our society about what television has become or is it a commentary on television about what our society has become? 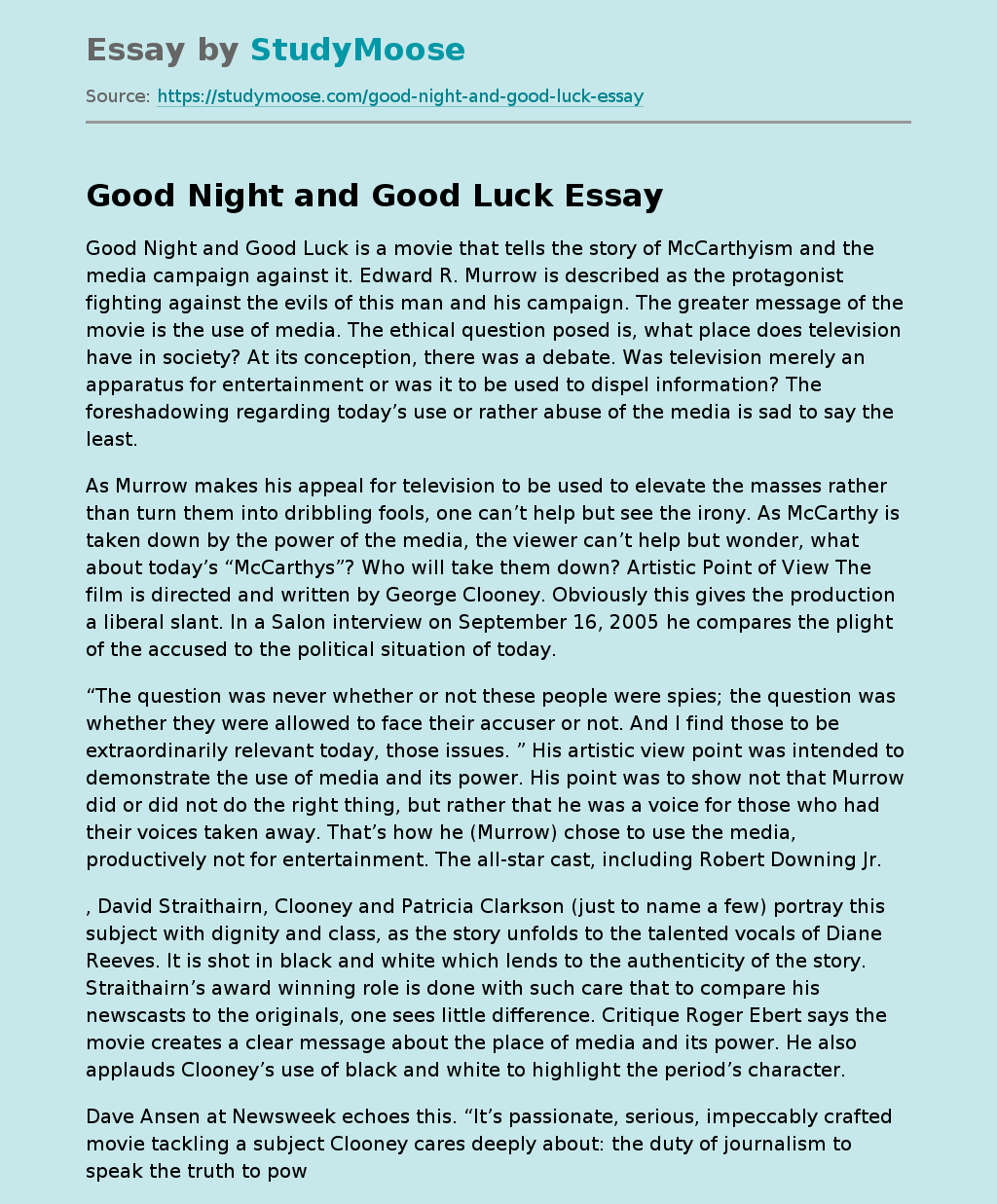