God Grew Tired of Us

God Grew Tired of Us documents the journey of three Sudanese men who were part of the “Lost Boys of Sudan”, a refugee camp home to thousands of young men who fled Sudan amidst the wars that went on since the 1980s. The three young men were one of the few who were invited to live in America and the documentary follows the men on their journey of adapting to the North American culture, customs and the new found freedom they never had back in Sudan.

Don't use plagiarized sources.
Get Your Custom Essay on God Grew Tired of Us Just from $13,9/Page

Throughout the film, the audience witness their struggle of feeling a sense of belonging and also their strive to find the family members they lost when they had to flee the country during the war. The men began their journey to the United States when they got on their very first airplane to Belgium for a connection flight to New York. There we witness the men embark on their first cultural shock.

At the airport, the men are obviously amazed at the diversity of races since they’ve grown up only knowing one, African.

Most North Americans grew up with a diverse culture around them so walking down the street and seeing someone who isn’t the same skin tone as you is never really a shock to anyone. For the men it was a first glance of what it’s like to live in the United States, where you’d have to learn to live amongst and get along with people who are of a different race and have different beliefs than you. When the lost boys arrive in America, they are presented with their very own apartment, something they’ve never seen in their lives. Now the men need to adapt with living a modern North American lifestyle with electricity and plumbing.

A guide takes them through the house and demonstrates how to use basic everyday appliances. This was particularly amusing because the men were learning basic skills such as using the toilet and using toilet paper, something that North Americans learn in the early toddler years. Also, now that the men live on their own, they’d have to cook for themselves, something that men are not supposed to do in Africa because it is seen as a woman’s job. In North America it is not seen as a humiliating task for men to be seen cooking. Instead, chefs and cooks are stereotyped as a man’s job. As new citizens of America, the lost boys have left behind their extended families back in Africa. In a sense of loneliness they lean on each other for comfort.

It makes sense that they travel together to help each other out, but unfortunately locals filed complaints to police that because the men travel in pacts, they’re intimidating. This was a totally absurd and racist accusation. Just because the men are tall and black doesn’t mean they are a threat to society. North Americans tend to stereotype people to segregate certain groups. The men experienced their first account of discrimination, an act that ultimately pushed them to run away from their home country in the first place.

At the end of the film, the lost boys have lived in America for over 3 years and have adapted to the North American culture. Two of the three lost boys were lucky enough to locate their family members. The men went on to live separate lives and even got college/university degrees. The documentary ends with a short note about each of the three men and what they did after the film was done. Daniel, John, and Panther, the once lost boys with no future planned ahead are now striving to make a difference for their country. 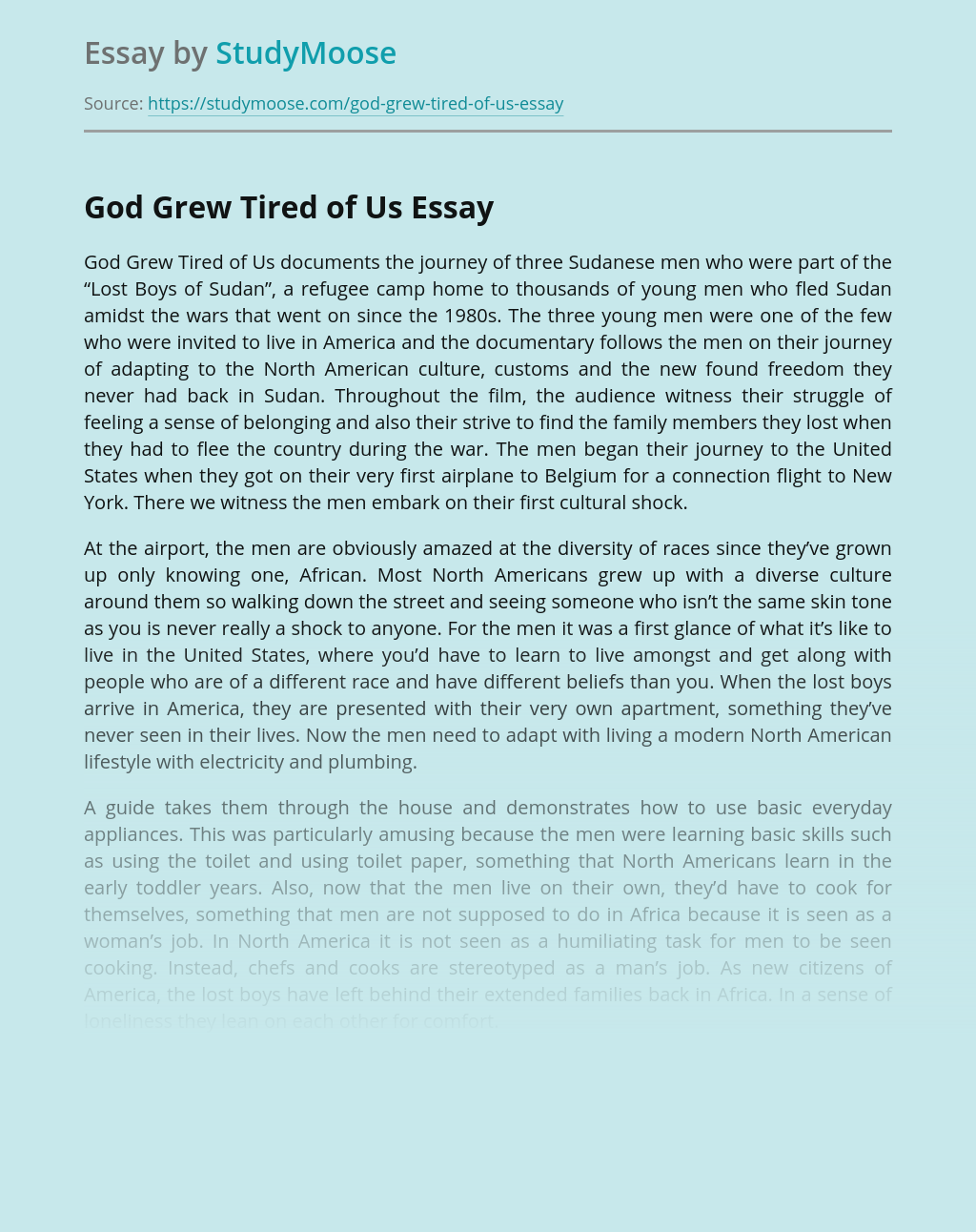 Federation is the act of forming a political unity under a federal government. In 1958, the British Caribbean nests came together to form a West Indian Federation. There were 10 units in this union: Jamaica, Antigua, Barbados, Trinidad and Tobago, Dominica, St. Lucia, St. Vincent, St. Kitts, Montserrat, Grenada. This attempt was short-term as it...

Social Stratification can be specified as “a specific form of social inequality. It describes the existence of social groups which are ranked above the other, generally in regards to the quantity of power status and wealth their member posses. Those who belong to a particular group or stratum will have some awareness of common interest...

In the early modern period, silver became the currency of the world. Never before had any good been so zealously sought after or acquired. Not even the grand spice trade routes over Asia could compare with the enormous scale and complexity the discovery of deposits of silver in Spanish America and Japan brought to global...

There were 2 main leaders of the Barbados Revolt of 1816, they were Bussa who was a free man in Africa and was brought to the Caribbean in the transatlantic slave trade which was indeed traumatizing. the other leader was Nanny Grigg. Causes The causes of the 1816 revolt in Barbados are: 1. The British...

What were the economical, social and political consequences which resulted from the changeover of tobacco to sugarcane in the 17th Century?’ Objectives •What is the sugar revolution? •What were the reasons for the change from tobacco to sugarcane (better termed a the sugar revolution) in the 17th century •Assess the social political and economical consequences...