The soul and life of man is a precious thing, something not to be trifled with or experimented on without thinking of the potential ramifications of doing so. Doctor Victor Frankenstein did not put much thought into the consequences of advancing the natural sciences while playing God with mortals. Victor Frankenstein grew, morally, through the course of the book, Frankenstein. Initially, Victor set out to further advance natural science as well as cheat death. As the tale progressed, however, he began to regret his course of action almost immediately after his monster awoke.

Don't use plagiarized sources. Get your custom essay on
“ Goals of Dr. Victor Frankenstein ”
Get custom paper
NEW! smart matching with writer

Doctor Victor Frankenstein was young and naïve; he planned to discover the undiscovered. In other studies you go as far as others have gone before you, and there is nothing more to know; but in a scientific pursuit there is continual food for discovery and wonder (Frankenstein 35-6). Victor believed he could perform an act of God without consequence. He committed vile offenses against the natural laws of humanity by taking pieces of the recently deceased and compiling them into one, presumably soulless, being.

He failed to see the true meaning of death, to realize passing away is just a natural part of life and nothing can truly stop this ordinary occurrence. In the words of Derek Dawidson, Death is about moving onto another existence and life is trying to figure out your lifes rebirth or beginning of a life. You are to follow your path whether it is full of conquest or self destruction (Dawidson).

Victor slowly began to realize his actions were immoral and crimes against humanity itself.

He only realized the extensiveness of his atrocities when his monster was given the gift of life. Throughout the tale of Victor Frankenstein he slowly begins to question his actions, before finally regretting them and attempting to make amends. When he meets Robert Walton his regret is evident as is his attempt to safeguard any future mayhem from being committed.

You seek for knowledge and wisdom, as I once did; and I ardently hope that the gratification of your wishes many not be a serpent to sting you, as mine has been. I do not know that the relation of my disasters will be useful to you; yet, when I reflect that you are pursuing the same course, exposing
yourself to the same dangers which have rendered me what I am, I imagine that you may deduce an apt moral from my tale (Frankenstein 15). Victor warns Robert to be wary of his actions and to take heed of his thirst to make new discoveries. His message to Robert is simple, insanity and obsession on a single goal only leads a man down the path of self-destruction. Victor has grown to know when to stop an obsession, however unable to do so for his own.

A man playing God with his fellow mortals only leads one down the path of true self-destruction. Doctor Victor Frankenstein began as a guiltless man, aiming to further increase his knowledge and love of the natural sciences. His decisions led to the creation of a creature, which had no equal, no mate, nothing to share its woes with. Victor discovered how wrong he was, too late to make amends for his crimes. He may have made a living thing with science, but he did not think of the ramifications his actions would have upon this poor creature. 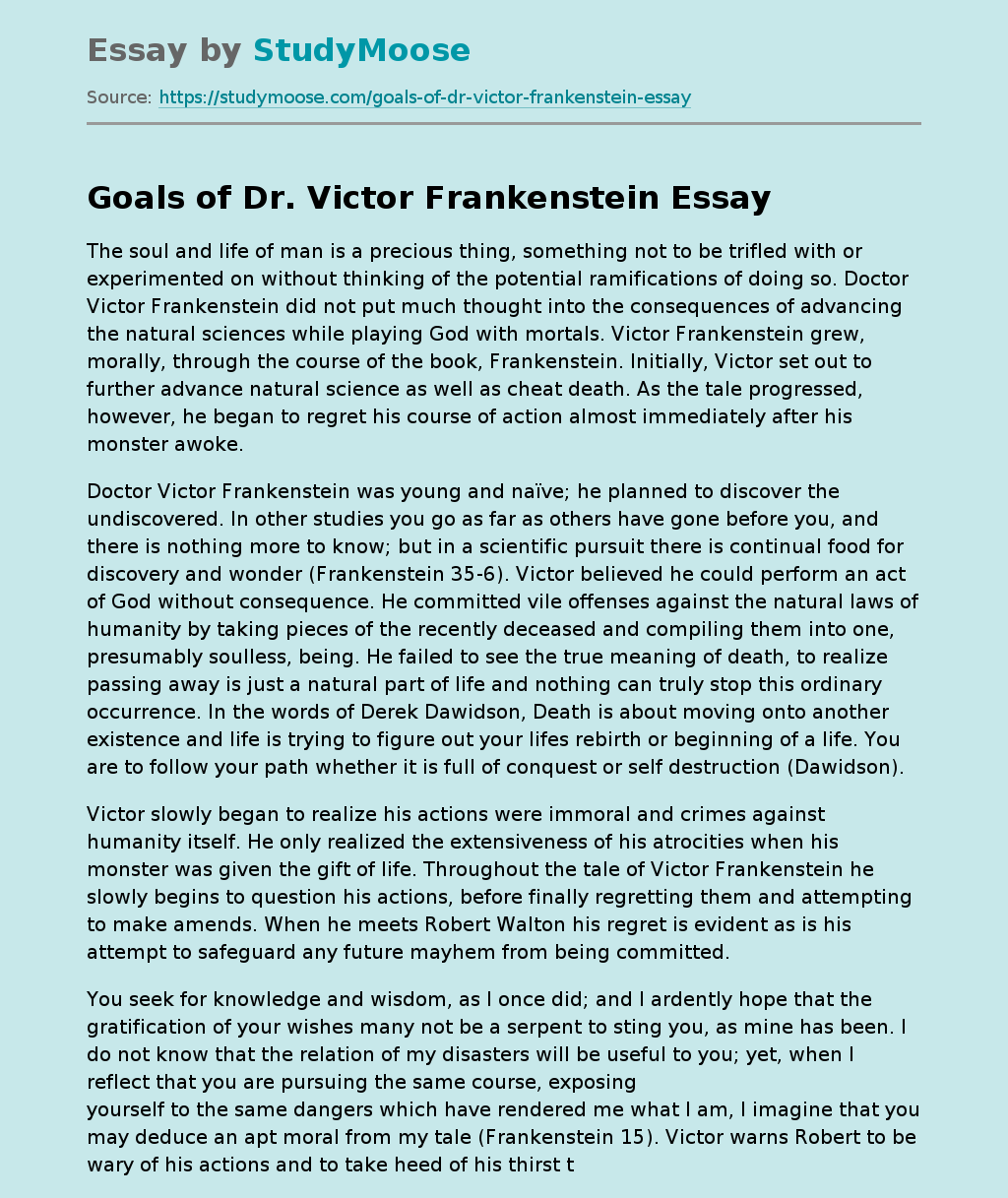