However, besides Greece, there are other European countries also belonging to European Union; face a similar problem, such as Portugal, Ireland, Italy and Spain. Therefore, Greece’s debt crisis also triggers a European crisis. As the three companies lowered Greece’s credit rating the cost of their debt was on an upward trend. Consequently, Greece initiated an austerity program, the austerity measure resulted mass demonstrations. Background It all started in 2001, when Greece joined the European Union, Greece’s deficit at the time was higher than 3%, the standard of European Union.

An American company named Goldman Sachs “helped Greek government to mask the true extent of its deficit with the help of a derivatives deal that legally circumvented the EU Maastricht deficit rules. At some point the so-called cross currency swaps will mature, and swell the country’s already bloated deficit. ”(http://translate. google. com/? sl=en#en/zh-CN/) In comparison to other EU countries, Greece’s economic situation was relatively weak.

Tourism being the main source of income for Greece was affected by the global economic crisis in 2007 which reduced the number of tourists form all over the world.

This had a strong impact on Greece, as their imports were higher than exports; it caused the outflow of capital. Other factors that added to their crisis were high government spending, tax evasion and corruption. The bailout from European Union European Union and IMF provide 110bn Euros for the first bailout and 130bn Euros for the second bailout to help Greek government pay its creditors.

At the same time, the vast majority of Greece’s private-sector creditors agreed to wipe off some of the debts, and also agreed to lower the present interest but this was not enough for Greece. Consequence of Greece’s economy -Austerity measure

Increase of taxes, decrease wages What should Greece do in order to change its situation? Greece should implement budget cuts, higher taxes, improve labor market, lower pension reform. What can European Union do in order to protect Eurozone ST-GREEK : Similar to ST-stock (special treatment stock is a stock continues to have a loss for three years and has a risk to leave stock market) For example, European Union can give Greece some special treatment such as: 5% of financial deficits and fewer than 90% of public debt to gross domestic product; change the name of Greece in EU to ST-Greek; Audit Greece’s expenditure twice a year.

European Union can also do same thing to Portugal, Italy, Ireland ; Spain. Hidden International Competition. The speed development of capitalist economies after World War 2 resulted between control and anti-control of America and Europe. The frequent trade between European countries helped economic union. U. S and Soviet Union’s situation had threatened the development of European countries. It was impossible for any single country to deal with that kind of threat, unless they stay together. That’s why the EU was formed. It was not a big deal for America at first, until EU had mentioned Eurozone.

It suffered a drastic disagreement from London’s financial hub as it threatened the position of the U. S dollar. To split EU they supported the eastward enlargement of EU. When Germany and France succeeded, they already lost the advantage of EU. There’s a big economic difference between east Europe and west Europe and they were not trading frequently. If wolves stare at the most weak sheep, the sheep’s result is certain. Surely, wolves can not be satisfied for just one sheep, they wanted to eat all of the sheep, but a smart wolf would give sheep a chance to breed.

After Greece, Portugal, Italy, Ireland and Spain may have risk of being eaten by the wolf. So, France and Germany face a difficult problem, if they help Greece, their citizens are not happy and the countries they help are not grateful for their bailout, they keep asking for more. If they don’t help those countries, they will leave EU subsequently making EU weaker. So, we can fairly say that it is the main purpose of London’s financial hub to make the dollar’s situation safe now as it will be a long time before EU can challenge the US dollar.

In my opinion, every great change in this world is controlled by the super powers, to become more powerful they make other countries weak. After Japan, Southeast Asia and Europe, who will be next? The wolf will find different ways to weaken other countries in order to empower themselves. I think the simplest way is to observe what wolf does next. Further global implication and specifically Canada “Canada and Greece have been enjoying good trade relations for many years. Bilateral merchandise trade reached $256. 3 million in 2011. Canadian exports totaled $88. million, led by furs, vegetables and pharmaceutical products to Greece. Canadian imports from Greece totaled $168. 2 million in 2011, led by preserved food, fats and oil (mainly olive oil) and articles of iron and steel. ” (http://www. canadainternational. gc. ca/greece-grece/bilateral_relations_bilaterales/index. aspx? lang=eng) Greece have to control their imports in order to pay for the debt, so their may decrease the import of Bilateral merchandise and furs, vegetables and pharmaceutical from Canada. It will have adverse effect on Canadian economy. http://en. wikipedia. org/wiki/Greek_government-debt_crisis 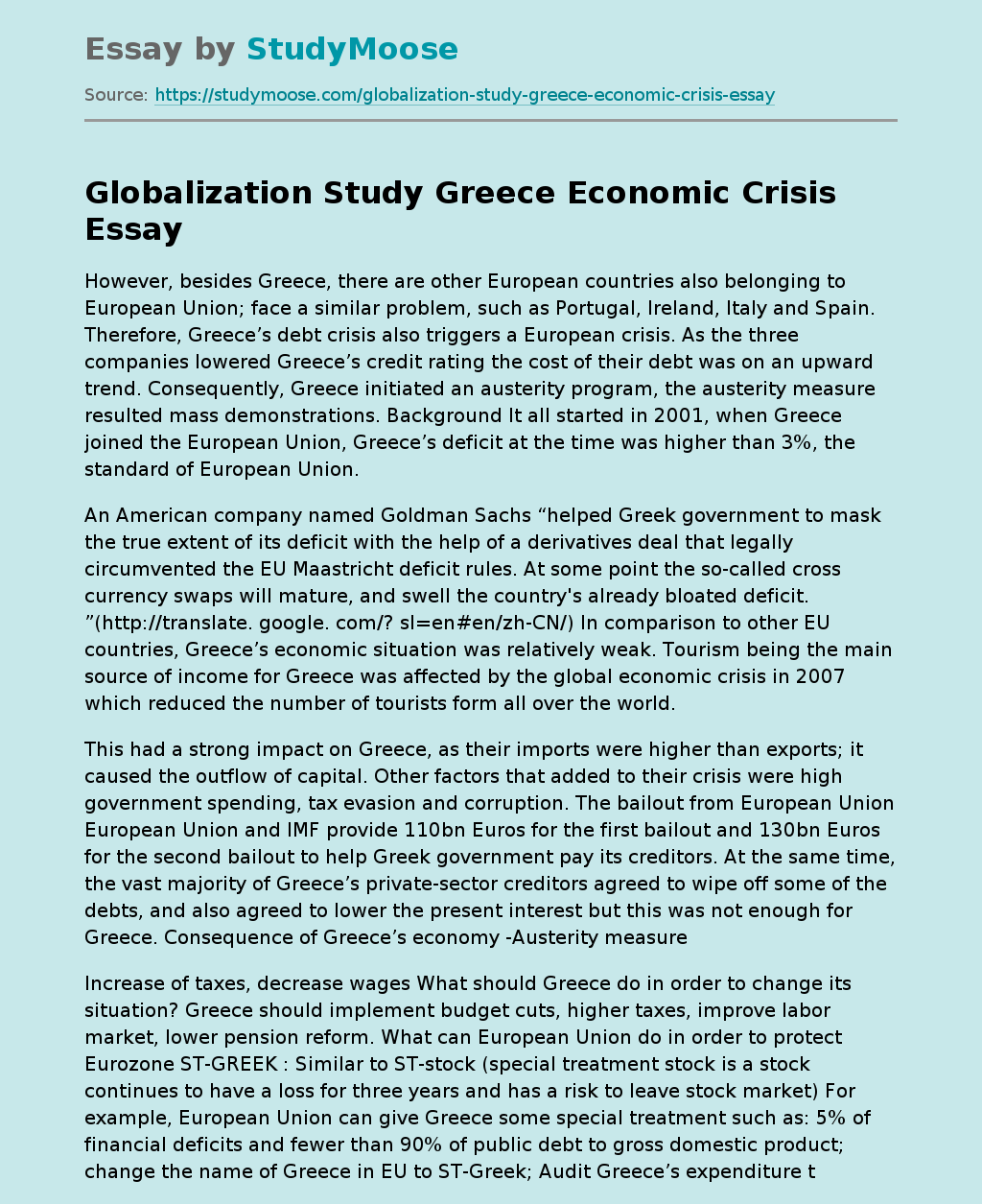