Advantages and Disadvantages of Globalization

Globalization is “the integration of states through increasing contact, communication and trade to create a single global system in which the process of change increasingly binds people together in a common fate.” Some economists see globalization as being in the best interest of all states involved, while others believe that increasing modern trade and global economic relations is harmful in many ways. While globalization marks a move in the direction of a more open world-trading government, it can also be connected to damages on independence, making countries lose the ability to be totally independent.

As a result, issues of globalization and free trade are surrounded by an excited debate and controversy.

The economic demands of globalization have made countries less independent, making them incapable of taking care of their own issues, economies, and governments, with out the help of foreign aid. The more the weaker countries take from the more fortified countries, the greater their dependence and inability to take care of themselves they will become.

While they depend on other countries for financial and political support, they do not learn how to be more self sufficient.

They do not create enough revenue or have enough political power to stand on their own with out the threat of a financially or governmentally crashing. The more self-reliant countries therefore have to use their own resources to support these nations and therefore there will is less money and goods available to support their own societies and economies. Globalization slowly drains capital and commodities from the stronger, more independent countries.

The resources go to countries that will probably never be able to thrive with out aid, but with out it would dissolve and disrupt the balance of the political and economic scales.

To make global or worldwide in scope or application of trade, communication, and resources is what is known as globalization. The idea of unifying the world markets, the infinite numbers of ways to correspond, and the limited resources of humankind sounds like an intelligent idea. Many have come to realize however that by helping countries by giving them financial aid and the resources they need makes them dependent, not any stronger or self- sufficient.

Productivity increases faster when countries produce goods and services in which they have a competitive advantage. Living standards can increase more rapidly.

Global competition and cheap imports keep a constraint on prices, so inflation is less likely to disrupt economic growth.

An open economy promotes technological development and innovation, with fresh ideas from abroad.

Jobs in export industry tend to pay about 15% more than jobs in import-competing industries.

Millions of Americans have lost jobs because of imports or shifts in production abroad. Most find new jobs that pay less.

Millions of other Americans fear of getting laid-off, especially at those firms operating in import-competing industries.

Besides blue-collar jobs, service and white-collar jobs are increasingly vulnerable to operations being sent overseas.

American employees can lose their competitiveness when companies build state-of-the-art factories in low-wage countries, making them as productive as those in the United States. 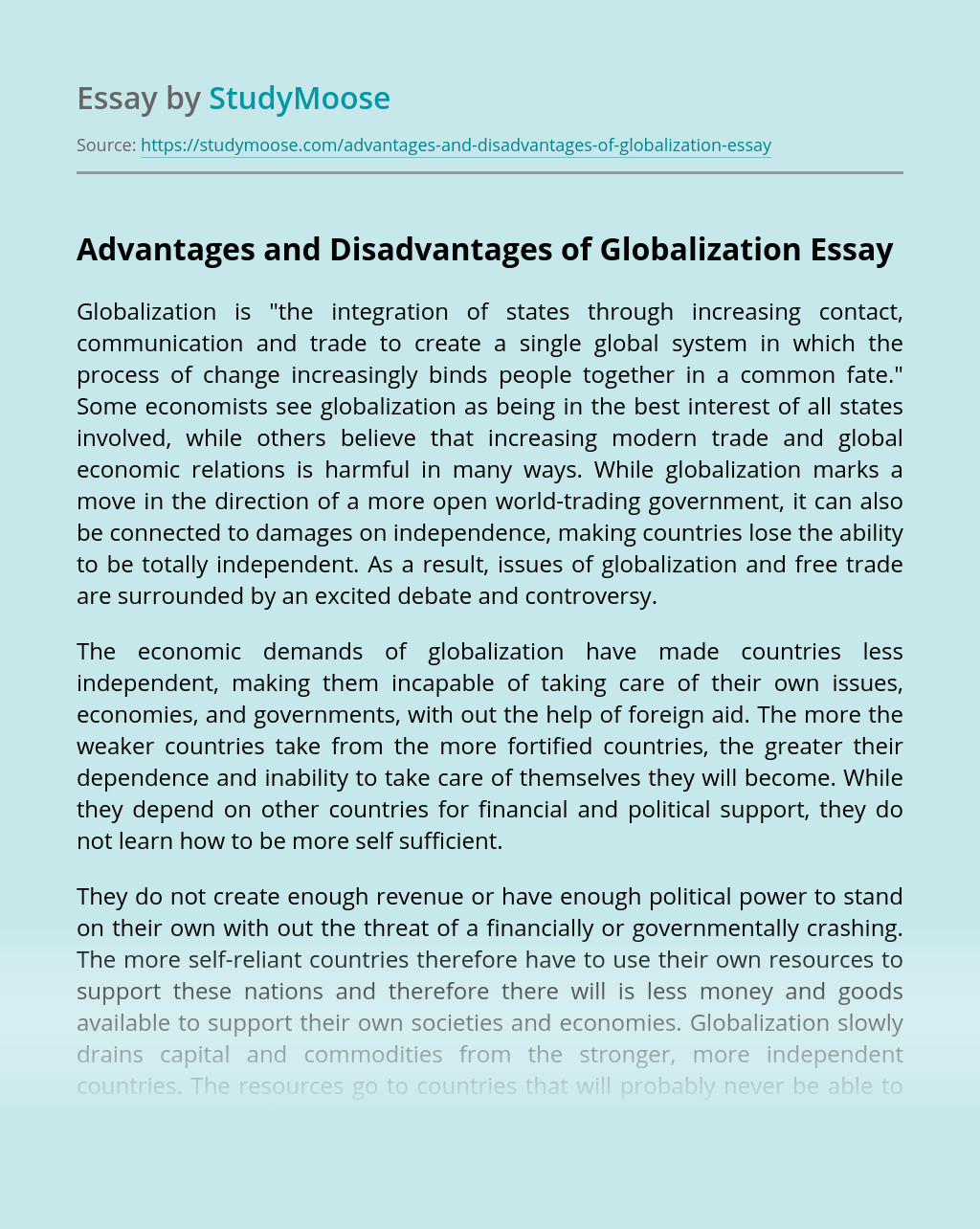 Don’t waste time
Get a verified writer to help you with Advantages and Disadvantages of Globalization
Hire verified writer
$35.80 for a 2-page paper
Stay Safe, Stay Original