“There is a belief among some economists that a country should focus more on export sector explanation and diversification than promoting the import substitution Industries (ISI).” Critically comment on this taking Sri Lankan economy as an example. You are expected to refer relevant articles from recognized sources on the said areas and provide your own views and analysis with proper reasoning. Export means shipping the goods and services out of the port of a country. An import is a good brought into a jurisdiction, especially across a national border, from an external source.

Don't use plagiarized sources. Get your custom essay on
“ Globalization and Import Substitution Industries ”
Get custom paper
NEW! smart matching with writer

Import Substitution Industries (ISI) means an economic theory employed by developing or emerging market nations that wish to increase their self-sufficiency and decrease their dependency on developed countries. Implementation of the theory focuses on protection and incubation of domestic infant industries so they may emerge to compete with imported goods and make the local economy more self-sufficient. Normally importing is not bad. Importing raw materials and goods is one of the paths of increasing the profit margins.

There are number of benefits in importing the goods, such as high quality, low prices, and benefits related to the international trade. But I think there are more disadvantages for country.

Importing of goods could lead the erosion of the domestic markets and national economies specifically when there is trade deficit occurrence the import is higher than the export. And can also be increased due to import of goods such as conflict in the domestic values due to the acceptance of social values.

The domestic industries can also be crippled due to the import of the countries where the wages are low and the domestic industries are unable to compete since they cannot lower down their prices of goods than the cost of goods. The exporting of goods is specifically difficult and disadvantageous for the small and medium size firms. The sale of services and goods into the foreign market is difficult for them rather serving the domestic market. A lack of knowledge of different languages, difference in culture, exchange regulations and trade regulations having the major impact on exporting the goods. But normally there are have more advantages than importing.

One of the major advantages of export is the ownership advantage which is specific to the firms international experience, asset and ability of the exporter to either develop the differentiated product or low cost product with in the values chain. A combination of investment risk and market potential is known as the location benefit of the particular market combination. In order to retain the core competencies within the organization and stitching it throughout the country without retaining the license, selling or outsourcing is the international advantage in export. Some of the organizations having lower level of ownership advantage may do not enter into the foreign markets. In case a company’s products and company’s ownership equipped with the international advantage and ownership advantage, the entry can be made through low risk model known as exporting under the eclectic paradigm. There is low investment requires in exporting of goods than the other modes of international trade and expansion such foreign direct investment.

Somehow it is recognized that the lower level of risk result in ,lower level of rate of return than possibly the other modes of international trade. On the other hand the usual return on international trade in export sales might not have greater potential but also there will be no risk. In export of goods the managers are allowed to exercise the various operational control however it does not have the option over the control of marketing activities of the company. The end consumer of exported goods is far away from the exporter though the various intermediaries can manage the risk. Export performance is one of the strongest areas of Sri Lanka’s economy at the present time. It can be best described as a growth area. If you were to take exports as a whole, there has been an improvement of around 14% across the board, in terms of the foreign exchange that was realized by Sri Lankan exports. However, in some sectors, the growth has been very much more.

For example, in the electronic sector, it is as high as 80%, with rubber performing at 45%, wooden products at 57%, and so on. And also emphasis that the government’s policy is not restricted to enhancing the quantum of foreign exchange that we earn from exports. Earning more foreign exchange is important as the country requires it, but we do not intend to stop there. This is a necessary condition but we do not see it as being sufficient. One of the main policy objectives is to ensure that all benefits percolate down to the grassroots level. In other words, there has to be an equitable distribution of wealth and income right throughout the country. So Sri Lanka is today referred to as a ‘middle income country’ with a per capita income of US$ 1,370. However, one of our problems is that the distribution of income within the country is far from equitable.

A good example of this is the fact that the per capita income in the district of Colombo is seven times what it is in districts such as Monaragela, Pollonnaruwa and Hambantota. Thus we need to address the inequities that are inherent in that situation. This is why the putting a particular emphasis on the concept of ‘export promotion villages’ that are being developed around the country. However in this year Imports in Sri Lanka increased to 1845.30 USD Million in July of 2014 from 1439.40 USD Million in June of 2014. Imports in Sri Lanka averaged 1035.70 USD Million from 2001 until 2014, reaching an all time high of 1986.40 USD Million in November of 2011 and a record low of 408 USD Million in February of 2002. (Reported by the Central Bank of Sri Lanka)

Normally we export different type of goods like Apparel, tea, rubber coconut gems etc… In those industries the tea industry is perhaps Sri Lanka’s most strategic economic sector and pure Ceylon tea our only internationally known brand. We are the world’s biggest tea exporter, manufacturing more than 300 million kilos of black tea annually, almost all of which is exported. Our orthodox teas usually sell at a premium over other orthodox teas from elsewhere. Therefore we can increase that industry and get more economical profit for our country. In importing we have to pay more money with huge taxes to other countries, and in that situation we waste our money more. But if we focus more on export sector explanation and diversification we can improve our productions, develop our manufactures, and finally we can export those productions for other countries, then we can earn more profit. Don’t want to pay unessential money for other countries if we’ll develop our exporting industry. In that case we can increase jobs for our people also, and we can develop our economy.

So, mainly Imports and exports may seem like general terms that have little bearing on everyday life, but they exert a profound influence on the consumer and the economy. In today’s interlinked global economy, consumers are used to seeing products and produce from every corner of the world in their local malls and stores. These overseas products or imports provide more choices to consumers and help them manage strained household budgets. But too many imports in relation to exports which are products shipped from a country to foreign destinations can distort a nation’s balance of trade and devalue its currency. The value of a currency, in turn, is one of the biggest determinants of a nation’s economic performance. So finally studying about those cases I also think the country should focus more on export sector explanation and diversification than promoting the import substitution Industries (ISI).

Globalization and Import Substitution Industries. (2016, May 19). Retrieved from https://studymoose.com/globalization-and-import-substitution-industries-essay 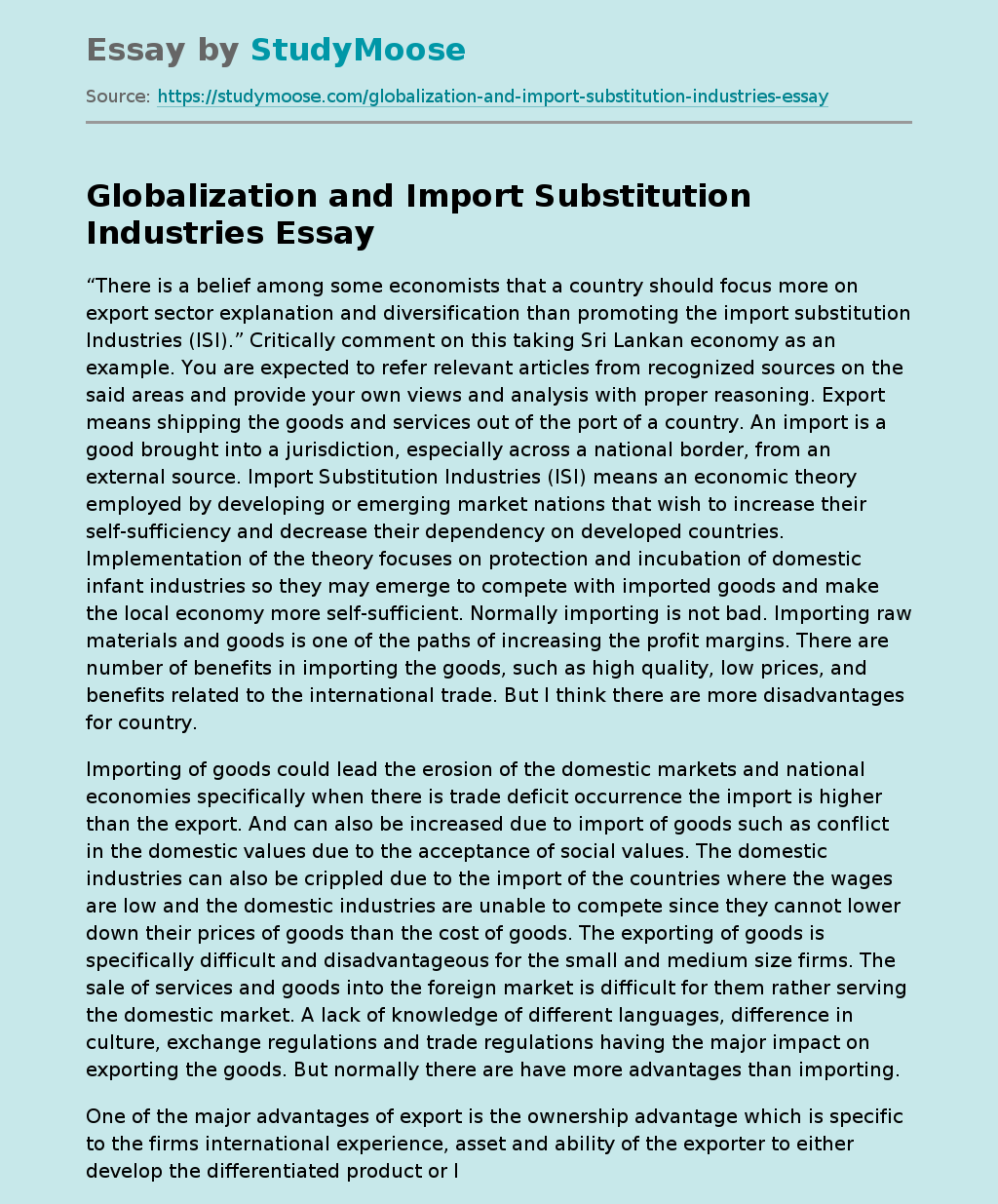