However, there are some far more substantial themes and symbols taking place within the novel. These themes require a little more critical thought, and aren’t directly delivered to the reader. One of these themes being the heavy emphasis placed on the glass castle, and also metaphorically what it signifies to Jeanette and her father, Rex. Through extensive deliberation and thought, the meaning of the glass castle becomes clear. It stands for the contrast between how Jeanette views her father, and how everyone else sees him.

The idea of the glass castle in itself is the idolized version of Rex that Jeanette sees, while the reality of it never being completed, represents the views that everyone else has. Throughout the novel there are multiple instances that show the strong love and trust Jeanette feels for her father. A bond that remains strong, even when other member’s of the family have lost some of that trust. This contrast of emotions can best be described through various quotes given throughout the novel.

“In my mind, Dad was perfect, although he did have what mom called a bit of a drinking situation” (Walls 23).

This is one of the first occasions where the reader is introduced to the contrasting feelings about Rex that members of the Walls family have. Jeannette, despite already knowing that her father has a drinking problem at a young age, still feels that her father can do no wrong. This sets the scene for how most of the book develops, Jeannette idolizing her father, despite the slight disdain visibly felt by others.

“We laughed about all the kids who believed in the Santa Clause myth and got nothing but a bunch of cheap plastic toys.

Years from now, when all the junk they got is broken and long forgotten,’ dad said, ‘ you’ll still have your stars” (41). This is yet another example of the strong bond developed between Rex and Jeannette. However, it is important to note this quote is delivered at a time when Rex is still in relatively good standings with the rest of the family, besides just Jeannette. On that Christmas, even though he couldn’t provide his children with material gifts, he was still able to deliver a memorable gift, which the children could cherish for the rest of their lives. I swear honey, there are times when I think you’re the only one around who still has faith in me,’ he said. ’I don’t know what I’d do if you ever lost it. ’ I told him I would never lose faith in him. And I promised myself I never would” (78-79). This quote perfectly sums up the relationship Rex had with his daughter. It also further exemplifies the acknowledged differences between how Jeannette feels about her father, and how the rest of the family feels. Even though Rex has let Jeannette down just as many times as Lori, or Brian, she is still able to somehow see past these faults of Rex’s.

Throughout this novel the character’s general feelings on Rex sway dramatically. Even Jeannette’s feelings for her father are tried at some points. Yet through everything that happens she never truly loses faith in her father. Jeannette always maintains a sense of respect and love for Rex, despite the tribulations he has brought the family through. Even up to his last moments on his deathbed, Jeannette’s positive feelings for her father remain strong. This contrasted affection between what Jeannette feels for Rex, and what everyone else thinks, is what the glass castle really signifies. 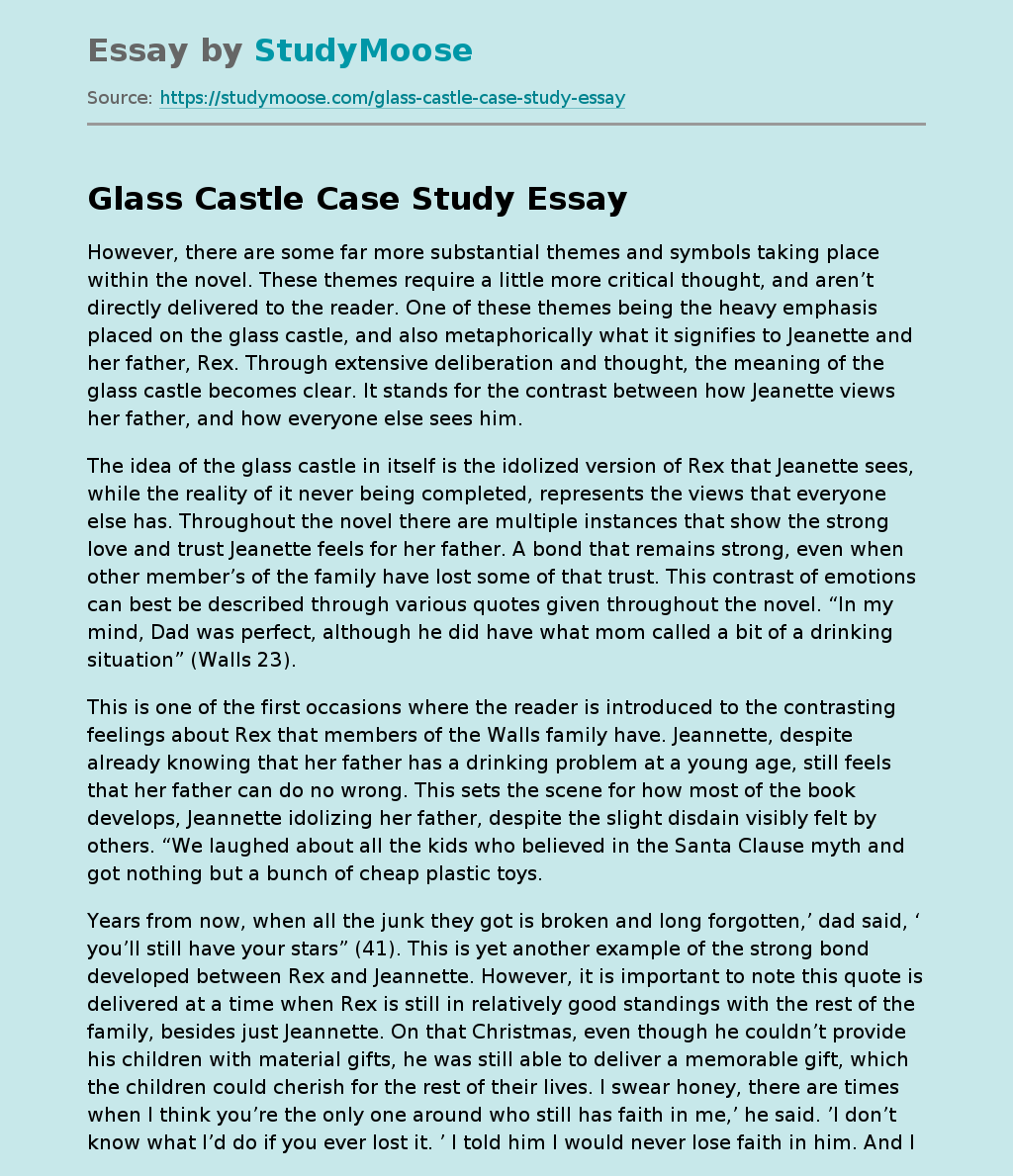