In the recent era, women are becoming the backbone of the society as they are getting jobs and conquering their skills in all sectors. This essay will describe the tertiary education of the UK and Australia in academic positions, types of subjects and pay rate.

Firstly, there might be gender discrimination in both countries in academic positions in tertiary education. The statistics show that in the UK ratio 36 percent of females are a staff of educational organization whereas professors have a proportion of 24 (HESA, 2018).

Don't use plagiarized sources. Get your custom essay on
“ Gender Gap in Tertiary Education ”
Get custom paper
NEW! smart matching with writer

Secondly, women are less likely to take those subjects which have fieldwork in it.

In the last few years in the UK, women accounted for only 56 percent of soft subjects like computer, arts, design, and humanities in higher education in the year 2015/16. Therefore, engineering and physical science subjects in the UK are in favor of males with approximately 74 percent (HESA, 2019). In the last decade, men are almost similar in percentage in both countries with approximately 84.5 in engineering. In contrast, men outnumbered women in STEM subjects whereas both countries stats depicts approximately at parity in terms of gender dissimilarity.

In the third paragraph, the pay rate is compared between Australia and the UK.

In Australia, men were likely dominant than women before the year 1987 however, women were only 20 percent till in number till that year. After the era of 1990, there is a gradual increment shown by women in higher studies in terms of pay rate where they earn nearly 58 percent more than men (Norton A, and Cherastidtham I, 2019). Although, female graduates have high remuneration in culture, social science and teaching respectively with approximately 2 percent more than male graduates in the UK (Sentiago P, et.al.). On the contrary, the UK has almost 58 percent of women who were involved in higher education in 2017 which is 17 percent more than men (HESA, 2019). Despite, both countries have a large number of males in than their counterparts in the previous decade, however, the trend is going in favour of females in both nations.

In conclusion, the aspects of tertiary education narrowing the gap between genders. There is a convergence between both the genders in the last decade although in some aspects women outnumbered men which are the sign of unprecedented growth for the society and to minimize the gender gap. 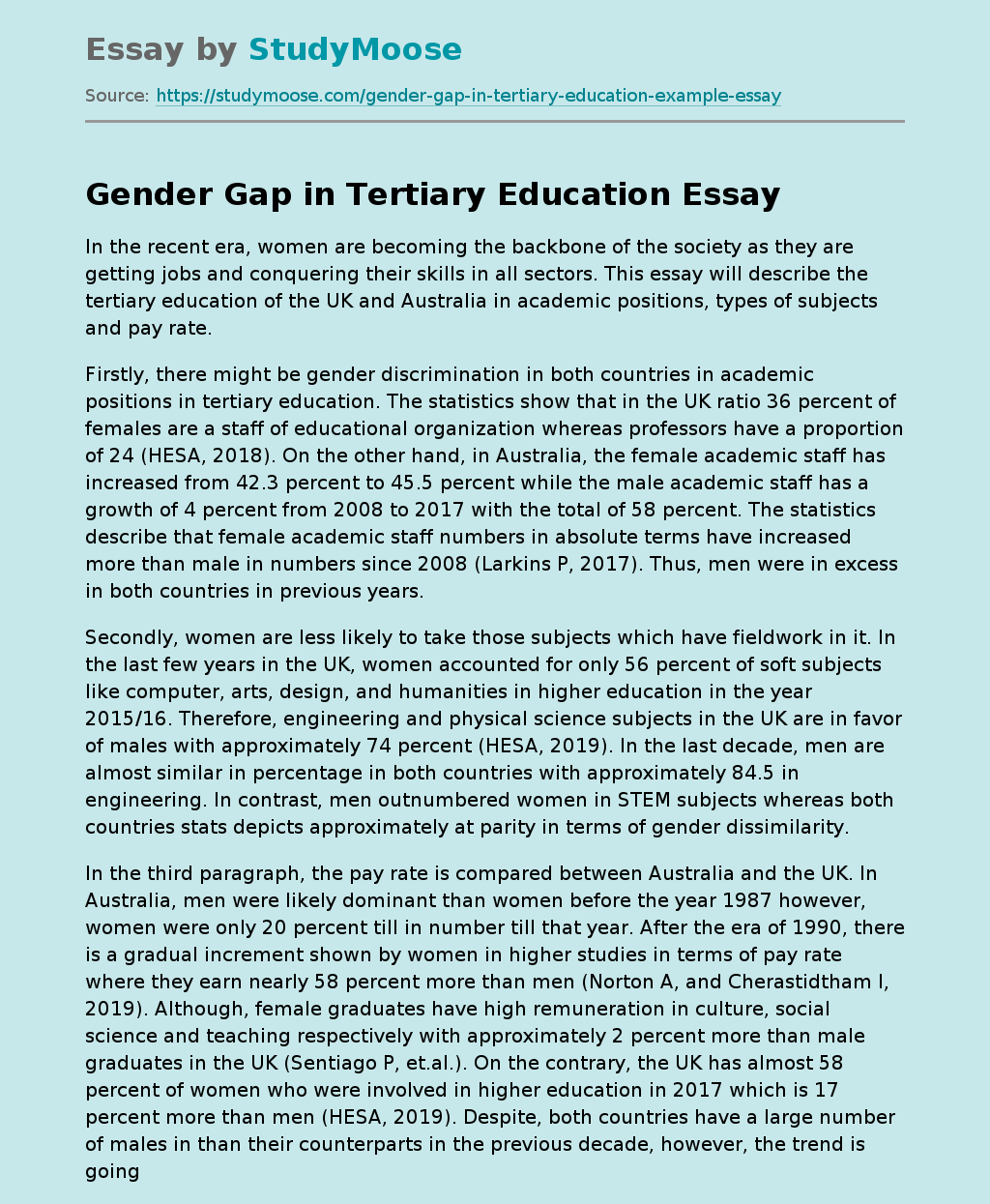