The concept of equality is regarded as an inalienable human right that should be enjoyed by all individuals regardless of their gender, race, religion, and other differential factors (United Nations, 2009). However, it is clearly seen that this is not practiced in the society that exists today. Discrimination still persists and this is greatly exemplified by the inequality that is based on gender differences. It is undeniable that women are still placed in a disadvantageous or inferior position as compared with their male counterparts.

Don't use plagiarized sources. Get your custom essay on
“ Gender Bias ”
Get custom paper
NEW! smart matching with writer

There are indeed substantial changes that have taken place in the past that made the situation of women better than before. Nevertheless, it is still obvious that there are still many changes that should be made before women can achieve the real essence of equality that they rightfully deserve. The discriminatory practices against women can be rooted back in the early history of the world wherein philosophers are still trying to make sense in the world that human beings live in.

Even in the past, women have already been seen as inferior to men and this is evidently proven in the development of language.

According to Becky Michele Mulvaney, the author of the article entitled “Gender Differences in Communication: An Intercultural Experience,” gender is both an influence of and a product of communication. In line with this, she pointed out how the idea of gender is first learned by an individual through talking with other people. A person could see the difference between the language that is used by girls and is often characterized by qualifiers and fillers to soften their message.

There are words that are acceptable if used by a boy but not by a girl. Moreover, famous philosophers also focused on the image of an active male that makes a female as mere a supporting character. This is exemplified by Plato who defined women as “lesser men” and Aristotle who said that women are “a deformity, a misbegotten male;” as well as St Thomas Aquinas who argues that women should not have been created by God (Mulvaney, 2004). In the same manner, discriminatory practices against women still continue up to this present time.

The patriarchal influences of key personalities in history and the general perspective of the people before, that women are inferior to men established a societal thinking that further propagated this view. Despite the improvements in the status of women in the society, it is evident that they are still perceived as second class citizens. This is proven in the professional lives of women wherein there are still biases and discrimination practiced against them because of their gender.

Even though there are women that are already working in industries that are previously dominated by males, there is still an observable discrepancy that shows that a large number of men are in the working force. Furthermore, women are also having difficulties climbing the professional ladder of success because they are not given a fair consideration because of their gender even if they have the same capabilities sometimes even better skills than their male contenders (Farough, 2005).

Being the case, it can be said that the inequality experienced by women is often not in terms of their age, race, or religion even though these factors are often intertwined. The inequality that they have to go through especially in their jobs is brought about by the social construct that women are inferior to men. The society, the one that is responsible for creating this concept, should also be the one responsible to deconstruct the notion of gender inequality.

In order to do so, it entails using approach that deals with the cooperation and collaboration of people regardless of their genders. The Feminist/Sociological approach entails that people should work toward deconstructing this gender bias especially the males, and should realize that there are more disadvantageous effects if this inequality persists as compared with the privilege that they get from it (Farough, n. d. ).

Furthermore, gender inequality could also be addressed through the proper use of language and communication. People should realize that language and communication are also intercultural factors wherein diversity should be accepted because there of the inherent differences between males and females (Mulvaney, 2004). However, it should be remembered that these differences should not render one gender inferior than the other. References Farough, S. (2005). The Negative Consequences of Male Privilege. 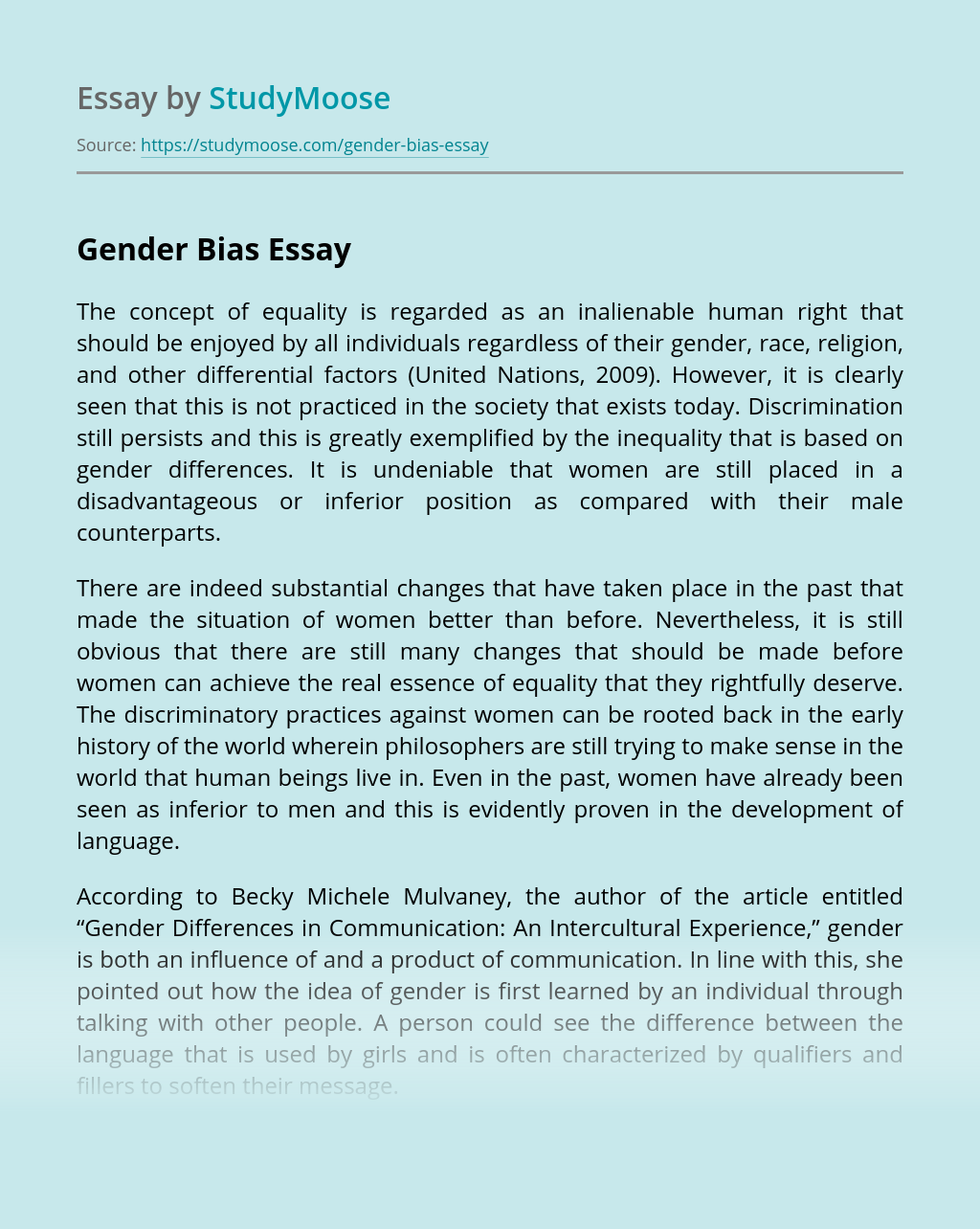