Gandhi, Martin Luther King, And Mandela: What Made Non-Violence Work

The history of violence in the world is well documented. However it is also possible to use non-violence to bring about change. This DBQ will look at two countries where a non-violent movement was successful. India and South Africa were two important nations on two different continents. But although they looked strong on the outside, each one suffered from a disease that threatened the health of the whole. For India, the disease was colonization. For South Africa, it was racial segregation.

Don't use plagiarized sources. Get your custom essay on
“ Gandhi, Martin Luther King, And Mandela: What Made Non-Violence Work ”
Get custom paper
NEW! smart matching with writer

In each of these nations three conditions help explain why non-violence worked. The first condition was that both of them had been colonies of England. And like England both countries thought law was very powerful, more powerful even than government officials. The second condition was the presence of violence. Without the possibility of a violent revolution, the government might not have been willing to change.

The third condition was the presence of a leader, Mohandas Gandhi in India and Nelson Mandela South Africa.

Each of these men was so charismatic he could lead his followers to a non-violent victory. Both of them gave their lives to the cause. Gandhi was shot by an assassin while Mandela spent almost twenty-seven years of his life in prison. Mohandas Gandhi, Martin Luther King, Jr., and Nelson Mandela all achieved a revolution and independence in their countries through non-violence. The reason this worked is because the non-violent people would be beaten and killed for doing nothing wrong, this made the attackers look like idiots for killing defenseless people.

This would make the attackers realize what they’re doing and they would grant the country independence. The documents provided could be situated into four categories: civil disobedience, self-control, willingness to accept punishment, and embracing the enemy.

Document 1 is a letter from Gandhi to Lord Irwin, the English governor in India. The point of view is Gandhi because he is basically telling the governor what his plans of civil disobedience are: Gandhi and the community are going to ignore the Salt Laws and march to the sea to make their own salt. The tone of this letter is very calm and peaceful. Document 2 is an excerpt from Martin Luther King, Jr.’s autobiography along with a photograph of a 1963 sit-in of integration supporters at a lunch counter. The point of view is MLK and the tone of his excerpt is proud because he knows that what he’s saying is right. This is a good example of non-violence and civil disobedience because the lunch counter was for white people only, and the integration supporters did not fight back at all to the people who may have been throwing stuff at them, pouring stuff on them, or spitting at them.

Finally, Document 3 is an excerpt from Nelson Mandela’s book, Long Walk to Freedom, and he is contemplating which tactic to use in order to achieve independence. The tone of this document is just boring because Mandela is simply thinking to himself. After pondering over the situation, he obviously selects the non-violent approach and it works like a charm. An additional document that could be helpful for this category could be a picture of a group of people who are being civilly disobedient and being beaten. 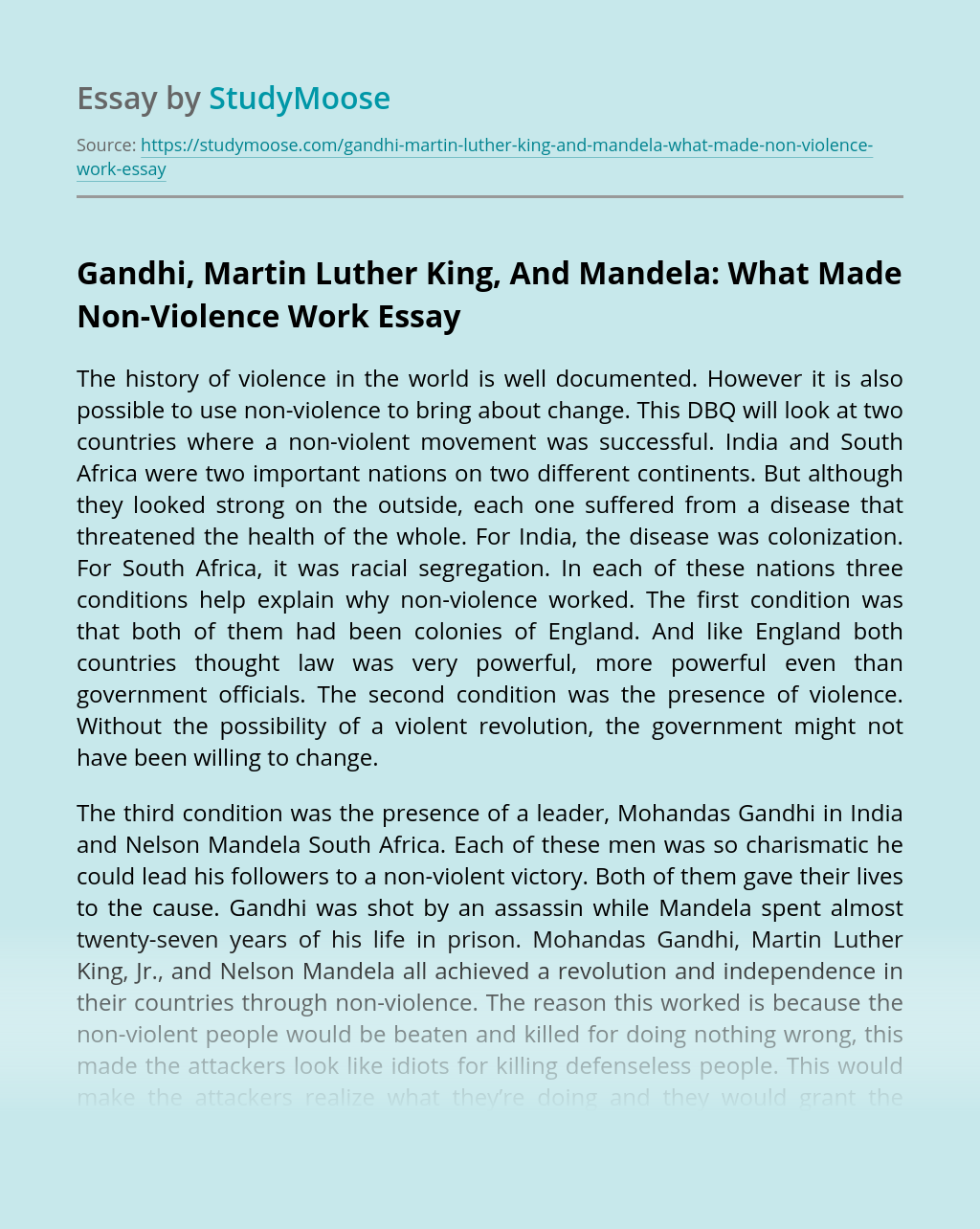