Popular fictions texts expressing views of the future educate audiences about current issues and the dystopias that develop from them. Texts such as the film ‘Gattaca’, directed by Andrew Niccol and novel ‘Fahrenheit 451’ by Ray Bradbury explore futuristic societies and the implications that become of their innovation. Although entertaining, texts such as these are didactic and must be taken seriously, as they communicate messages to audiences regarding prevalent concerns and possible futures based on society’s choices.

Gattaca’ (1995) directed by Andrew Niccol, follows the story of the underdog Vincent, who is challenged by genetic discrimination against ‘in? valids’ like himself.

Don't use plagiarized sources. Get your custom essay on
“ Future Concerns – Gattaca and Fahrenheit 451 ”
Get custom paper
NEW! smart matching with writer

Through an elaborate identity switch and the help of ‘genetically advantaged’ Jerome, Vincent prevails to achieve his dreams and find his place at Gattaca Space Station. Niccol utilises conventions of film to convey messages to the audience by highlighting issues relevant to the context of production.

Gattaca’ incorporates many themes which highlight the corruption and inequality in this strange, new world.

Niccol explores concepts such as elitism, perfection, inequity and modernism. This film opens with two contrasting epigraphs, which entices viewers’ interest into moral themes in ‘Gattaca’. The first quote reads: “Consider God’s handiwork; Who can straighten what He hath made crooked? ” Ecclesiastes 7. 13. An interpretation of this quote is that life is intended to be left alone to take its course, which is contradictory to many ideas in ‘Gattaca’.

The quote following reads: “I not only think that we will tamper with Mother Nature, I think Mother wants us to.

” Willard Gaylin. This presents audiences with differing opinions to contemplate as they consider what scientific advancements their own future holds, watching Vincent in his. The opening scene is an extreme close up shot of Vincent’s fingernails, hair follicles and loose skin, against a blue cubicle. The extreme close up shot suggests importance as the camera focuses in on the subject matter, emphasising the significance of Vincent’s DNA.

Sterility and cleanliness is suggested by the use of cold, deep blue hues. The use of blue is constant throughout the film, as is the significance in detail. These concepts tie to other scenes, such as ‘The Eyelash’, where Vincent’s own ‘invalid’ eyelash is discovered during a murder investigation. This concept highlights the precision of technology in the future, and that life with such structure becomes complicated. Audiences can learn lessons from examples such as these scenes s they can relate the situations Vincent is put in with possible futures based on the direction society is heading in present times. Another effective technique demonstrated by Niccol is the first person narration by the central character, Vincent. This is important for the development in the movie, as Vincent is the protagonist we are encouraged to empathise with. Therefore, the use of bias narration and perspective is effective in supporting the ideas presented in the film.

Following the opening scene is ‘The Not Too Distant Future’, which cuts to a low angle shot looking up to the bold, symmetrical lines of the building. In this shot, Gattaca is shaded in black and grey tones, also indicating the power and formality of the institution. As the camera tilts down, the strong lines and colouring remain constant as view of the staff are also brought into the frame. Directors have dressed actors in blue business suits, again, enforcing the concept of formality, conformity and sterility.

The uniformed staff are very bland and indistinguishable from one another in their uniformed clothing. Silence is broken by the rising volume of diagetic sound effects, such as the beeping sound of accepted ‘valids’ through the turnstile, as well as an anonymous greeting by a placid female voice: “Welcome to Gattaca”. These techniques develop the idea that society has become lifeless and ‘black and white’, as Gattaca presents characters as clinical and robotic products of genetic modification, teaching audiences about social issues that relate to futures. 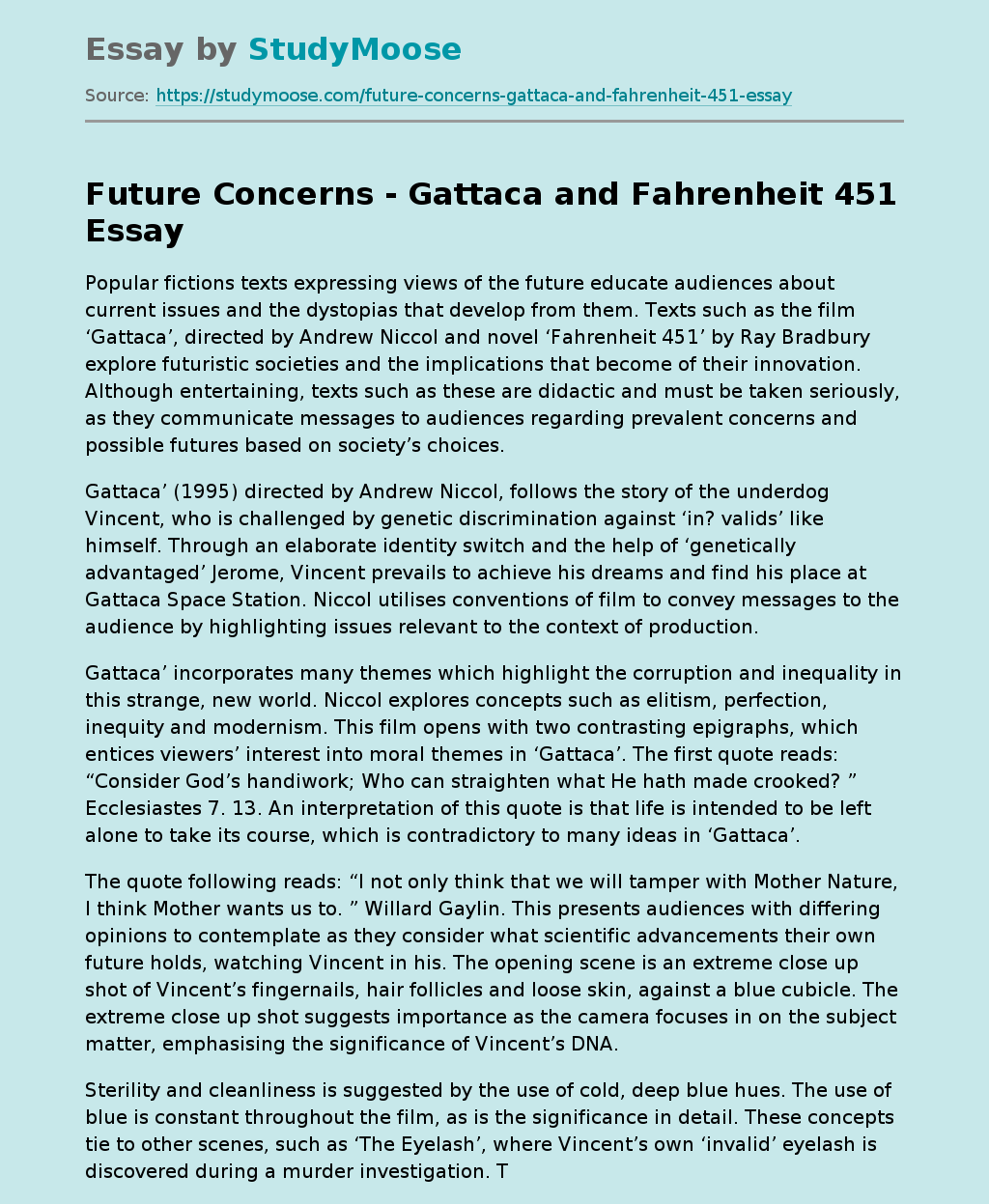