How to become a funeral director in the United States

The word mortician brings what images to mind? The career of a mortician is surprisingly different than it is portraied in movies and books. Being a mortician is a very rewarding job both personal as well as psychological to those with the temperament, training and discipline required to do the job properly. In this paper I’ll be reporting the requirements to become a mortician, also called funeral director or undertaker, the duties the job requires of you, and the outlook of this career in the future of the United States.

Don't use plagiarized sources. Get your custom essay on
“ Funeral Director Career in the United States ”
Get custom paper
NEW! smart matching with writer

To become a funeral director in the United States today isn’t an easy task. You need to be twenty-one, a high school graduate with some undergraduate college work, as well as at least one year of professional training in mortuary science, and completion of an apprenticeship.

“Upon completing a state board licensing exam, new funeral directors are qualified to join the staff of a funeral home.

In many states successful completion of a national examination given by the National Conference of Examining boards will qualify you for licensure”(IRN 10). In different states the undergraduate college credit varies considerably, one- third of the states require one year; another third wants two years; and the other third requires three years of credit(IRN 9).

A concentration of courses is also required in some of the states. You may need to take 15 credits in natural science, 13 in social sciences, 13 in business, 14 in chemistry(IRN 10).

In addition to your college work, you will need at least 50 credit hours of professional work in mortuary science. “There are about 40 schools of mortuary science officially recognized by the U.S. Department of Education today”(Shipley 220). The curriculum generally consists of courses in: “Embalming, Restorative Art, Chemistry, Microbiology, Pathology, Anatomy, Small Business Management, Funeral Home management, Merchandising, Accounting, Funeral Home Law, Computers, History and sociology of Funeral Service, Psychology of Grief, Grief Counseling, oral and Written Communication, Funeral Service Law, Business Law, and Ethics”(IRN 11). Along with educational requirements you need to look at the personal requirements it takes to be a funeral director.

You have to be on call 24-hours a day 7 days a week, death doesn’t know any holidays. The people’s needs come before any of yours in this career. You’ll need to work with others in a very fragile condition, you’ll have to be very patient with them. A lot of the time the mourners will vent their pent up anger on the funeral director and will blame you for their problems. Some of time you’ll need to deal with religions new to you and that seem strange, but you’ll have to be understanding and willing to let the mourners carry out their forms of burial and mourning. In other words, can you handle a career that requires constant sensitivity to needs and wants of other people?

One of the duties of a mortician is to embalm the corpse for show. “If the body is not to be buried within twenty-four hours, most communities require that it be embalmed”(IRN 6). After the body is brought to the funeral home, you would see first of all that the body and hair are cleaned and washed for embalming. A small incision is made at the base of the neck or in the groin to secure access to a major artery or vein. “The object in embalming is to pump our the body fluids, or blood, and to replace it with special long lasting chemicals which will keep the body from decaying for a long period of time and which will prevent it from further disease or decay, if death has been caused by a specific infectious disease.”(Lamers 420). Tubes are then inserted in the artery or vein. The tube in this artery is connected to a mechanical pump that injects a preservative and disinfectant solution into the blood system.(Lamers 426).

The chemicals eventually push all the blood out of the system and take its place in the circulatory system. “The final step is the completion of yet another procedure to remove gases and liquids from the trunk organs and this introduces yet another disinfectant chemical into the area”(IRN 7). If the body is disfigured in any way you may be required to do some restorative procedures on the body, using materials such as clay, cotton, plaster of Paris and wax (Lamers 535). You would be required to fill in any open wounds left on the body by law, but would use a picture of the deceased and try to make them appear as life-like as possible for the showing (Shipley 201). “Most important, however, are the tasks in which you guide, counsel and become involved in the needs of the bereaved and the sensitive, effective manner in which you handle their personal grief”(IRN 6).

When the body has been embalmed and taken care of you need to help the family choose a casket from the display room the they wish there loved one be laid in(Shipley 178). “On the actual day of the funeral service, you attend to the many, many ceremonial, logistical, and administrative details which are required to make sure that the funeral service goes smoothly and in strict accord with the wishes of the family or other survivors”(Lamers 541). “You should be prepared to suggest and arrange any type of funeral service, sacred or secular, that will best meet the needs of the bereaved.

Creative, alternative ceremonies in keeping with the deceased’s lifestyle can have special significance and meaning to the family. For example, close friends and relatives may be asked to participate in the service, or special poems or essays especially dear to the deceased may be worked into the service”(IRN 8). After the funeral you would assist the family in filing necessary claims for social security, veteran’s and union benefits and other forms of insurance. The major portion of your time, however, will be spent trying to help the families work through their grief. “Often families turn to you as funeral director as their first and last source of information, and comfort. And often they expect you to have all of the answers, solve all of their problems and meet their needs-obviously an impossibility, but a duty which you should nevertheless recognize and be prepared to fulfill to the best of your ability”(IRN 8). When everything is done the body must be disposed of by either cremation or burial.

Cremations in the United States have risen in the last few years. The number of cremations alone has risen 20% from last year in Minnesota alone(Encarta).”In 1993 a total of 448,532 cremations were performed at 1058 different crematories”(Encarta). One reason people are choosing cremations over burial is its much cheaper at 1000 dollars to as little as 500 dollars. They don’t want to have to make there family has such a big financial burden as in a burial.

The cremation would occur in a crematory where the casket and body would be incinerated to nothing more than ashes that would be placed in an urn. When the urn has been filled with the ashes it will weigh about 5-6 pounds and be about 200 cubic inches around. Some people has asked to have there ashes spread over the sea or a garden they always loved(Shipley 156). In some states they have cremation gardens, which is just a garden kept by the funeral home where the ashes may be put after the cremation.(Encarta). In a burial there will usually be a showing inside the funeral home and a service read outside at the grave sight(Lamers 134). “It is customary for the family to leave with the casket still above ground. When the mourners leaves, the funeral director ordinarily supervises the lowering of the casket into the grave or burial vault”(IRN 6). Earth burial is the most common means of final disposition in the world today(Lamers 96).

The outlook for funeral directors in the future is a good one. The greatest need will be in suburban funeral homes, whose business is increasing because of the growing shift of the population to the suburbs. Demand for funeral services is expected to rise as the population grows, and with it the number of deaths. An aging population is also expected to increase much fast than the population as a whole. Deaths will also increase among the younger population because of AIDS(CGP 3). Many funeral homes are businesses owned and run by the same family for several generations. This field is not a closed marker, however, more than 60 percent of those entering this work have no background in the profession(CGP 3). The field is highly secure and recession proof. Chances are that if you are temperamentally matched to the requirements of the work and like your job, you will have few worries about security.

Most funeral directors stay with their employers for many years and there is relatively little turnover in the field(IRN 12). The earnings as a funeral director greatly depends on the area of the country in which you are employed, the size of the funeral home at which you work and the number of cases handled. Also, your salary will depend upon whether your community in unionized or not(generally union contracts call for higher salaries and more generous benefits)(IRN 20). Average salaries, including bonuses, for owner-managers are about $60,000 annually. Midlevel managers averaged $40,000. Embalmers earn average salaries of $30,000 and apprentices average $20,000(IRN 21). In conclusion, the career as a mortician is very emotionally and physically challenging, but is a very secure future. Chances are if you set out to be a mortician and make it through the schooling you will find a secure job someplace and be set for life. 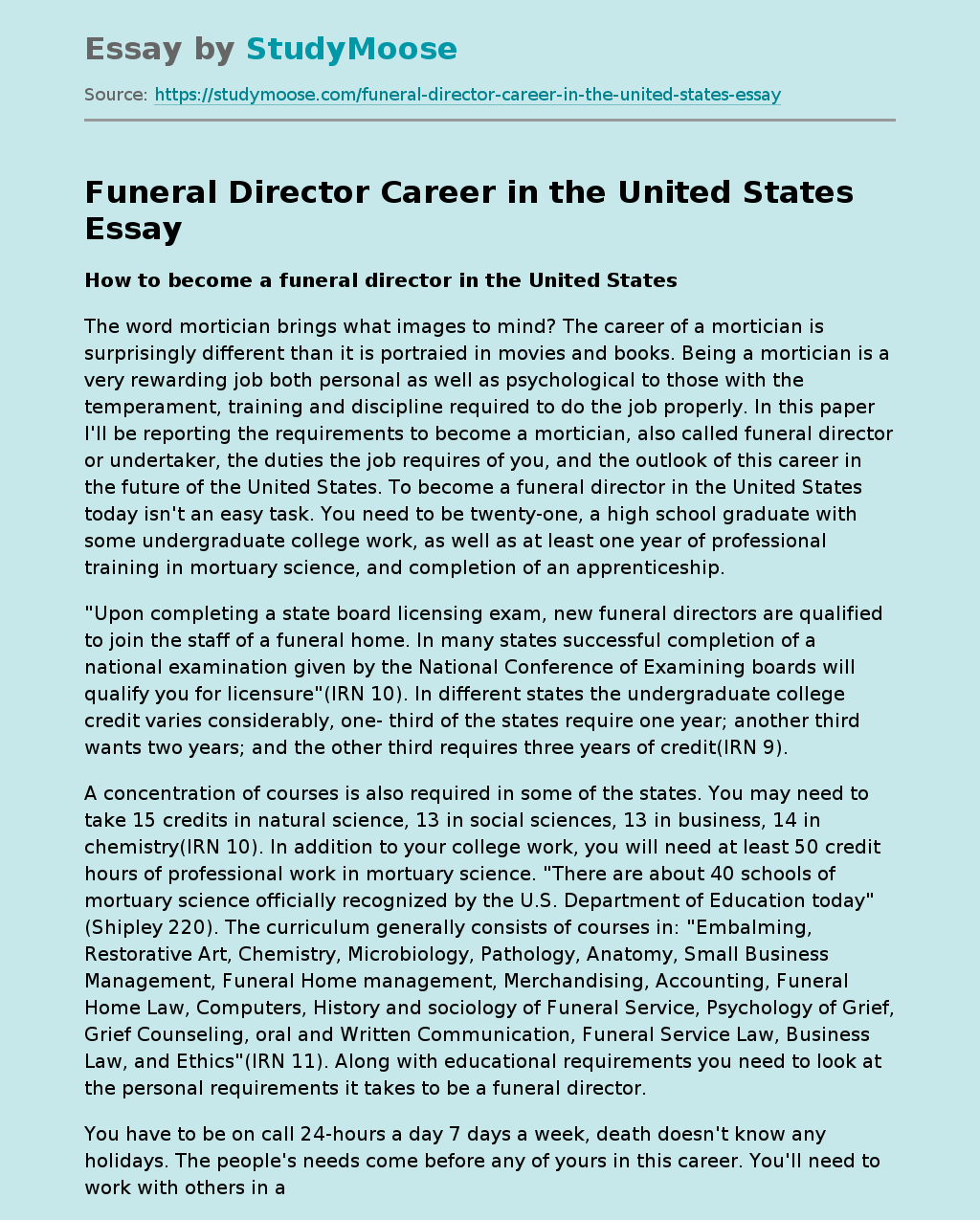