From Minimum Wage to Living Wage

What does the average American citizen need to sustain a suitable lifestyle? Is it a working wage of $7.25 or is a higher wage necessary? Those are the questions the United States Government needs to be asking themselves. The current minimum wage of $7.25 is not enough for a person to live off of comfortably. This is well known throughout the middle and lower class of society. With the rate of inflation on housing raising the minimum wage should to be raised, yet it has stayed the same since 2009.

Don't use plagiarized sources. Get your custom essay on
“ From Minimum Wage to Living Wage ”
Get custom paper
NEW! smart matching with writer

If minimum wage is not enough funds to pay for housing then how could it possibly pay for the necessities beyond that like food and clothing. Many states like California, Alaska, Colorado, and Florida are all raising their state minimum wage, so why won’t the federal wage be raised? This is what american citizens all around the country should be pushing for, a living wage not a minimum wage.

The minimum wage was introduced in the united states in 1938 within the Fair Labor Standard act (FLSA)(“What Is the History of the Minimum Wage?” ).

The point of FLSA was to supply overtime pay, child labor regulations, requirements of keeping records and the minimum wage. Minimum wage is the lowest wage an employer can pay an employee legally with certain exceptions. The reason the minimum wage was supported by FLSA was because the sole purpose of the minimum wage at this time was to stabilize the post depression economy and provide a stable protection plan for the workforce(“Minimum Wage.

A living wage is a wage that is high enough for someone to be able to afford a normal standard of living. Yet then we must ask, What is a normal standard of living? A normal standard of living includes income, quality of employment, affordable housing and quality, hours of work necessary to purchase basic necessities, access to affordable health care, and safety. The difference between minimum wage and a living wage is that even though the minimum wage is supposed to keep up with inflation and allowing for all of the aspects of life that a living wage can, it does not. A living wage has not been given to the american citizens and the federal government refuses to raise the minimum wage to bring the poverty rate and those who depend of welfare and food stamps to rise from the bottom and make a living and a life for themselves. Minimum wage has zero connection to poverty rates and a slimming connection to inflation rates of living costs. Minimum wage focuses more on federal raises allowed by the government based on economic and the interests of business. Living wage on the other hand is based off of cost of living, food expenses, child care, healthcare, housing, transportation, and other necessities needed to sustain a standard of life. Minimum wage takes into account the wage of one individual while the living wage is taking into account whole households and the needs of that household(Brown, Travis H. “Living Wage vs. Minimum Wage: What’s the Difference?”).

There are many americans who are living proof that the current federal minimum wage is not working for them to afford a sustainable life. Modonna made about $17,500 a year. Her monthly paycheck would equal out to $1,325 after taxes. With this amount of money flow and her being able to get $3,800 back in refundable taxes she still had to rely of SNAP (Supplemental Nutrition Assistance Program) and even then she struggled(Edin, Shaefer. Page 9). Jennifer, mother and wife struggling to get by and provide for her family on minimum wage, states “barely making it on $13 an hour is her version of the american dream”(Edin, Shaefer. Page 47). This just goes to show how little lose who try to live off of minimum wage struggle and how the smallest amount of money can make a substantial difference. Another family, Susan and Devin, have a similar dream to Jennifer. They imagine that a good life would be making $12 per hour with 30 hour weeks which goes to show how this dream of just making that small amount more per hour could potentially turn life around for those who struggle on minimum wage(Edin, Shaefer. Page 56). Debora worked in a factory making $7.90 per hour. After her paycheck came through she only ended up with $8.00 after taking care of her finances and bills. This left Debora with little to no money every month supporting the claim that minimum wage can not support a sustainable life(“Work Doesn’t Work.”). Taryn Lions, age 25 with two children under the age of 7, works at McDonalds as a crew trainer making $9.85. Since her $0.10 raise she has lost upwards of $100 in food stamps that she needed to provide her two children with food. She had to move 30 miles away from her place of work to be able to afford a place to live yet that still was only possible because she got a room ate that would allow them to split the $1090 cost into $550 each. To get back and forth from her job she had to buy a vehicle that is 17 years old with upwards of 200,000 miles logged. With her vehicle being so old and worn it constantly has a problem that she can not afford to fix. Taryn Lions makes above the federal minimum wage yet still can not afford standard living(PBS). These are all stories of people’s lives that are not supported and can not feed their own family because of the minimum wage resting at $7.25 while inflation of costs increase yearly.

The real question is what wage can the average american citizen survive on? The amount of money made in Pennsylvania weekly on the minimum wage of $7.25 per hour after taxes is $290 a week. For the whole month the income would come out to $1,160(“Calculator Results.”). That may be able to cover the grocery bills, but this income will not put a roof over the head of workers making minimum wage. The average grocery bill is from $125 to $300(“Cost of Groceries per Person per Month.”). That may not seem like a price that is hard to meet on that income but if you add in housing it is almost impossible. The lowest price average of apartments in Pennsylvania is from $850 to $1,100 a month(“Apartments under $1,100 in Pennsylvania.”). If you add the lowest end of each price ranges together the total cost is $975. This leaves $185 left over for clothing, healthcare and child care. Though this low combination of housing and grocery costs rarely go hand in hand. The other spectrum is $1400 in costs which is $240 more than they have. This leaves the worker in a state of dismay as there is no money for health care, childcare, or clothing. If the average worker is to make a wage that can support that standard of life they would have to make a wage of around $15 per hour. With this the weekly income after taxes is $600 and the monthly income after taxes is $2,400. Taking away the more costly housing and grocery budget would leave $1,000 left over for healthcare, childcare, and clothing which is a substantially larger amount of money. All of these calculations are not including transportation whether it is public or private transportation. Therefore even then at $15 per hour there would still be some troubles and careful budgeting.This would not allow for everything but the average worker could be pulled out of poverty and can save money for their children’s education and to support them the best they can. This would lower the united states poverty rate of 13.9% substantially(“What Is the Current Poverty Rate in the United States?”).

Minimum wage should be raised to $15 per hour. With cost inflation rising and the minimum wage staying the same the united states is bound to fall far into poverty as inflation is estimated to go up 3% every year(U.S. Bureau of Labor Statistics).

From Minimum Wage to Living Wage. (2021, Aug 02). Retrieved from https://studymoose.com/from-minimum-wage-to-living-wage-essay 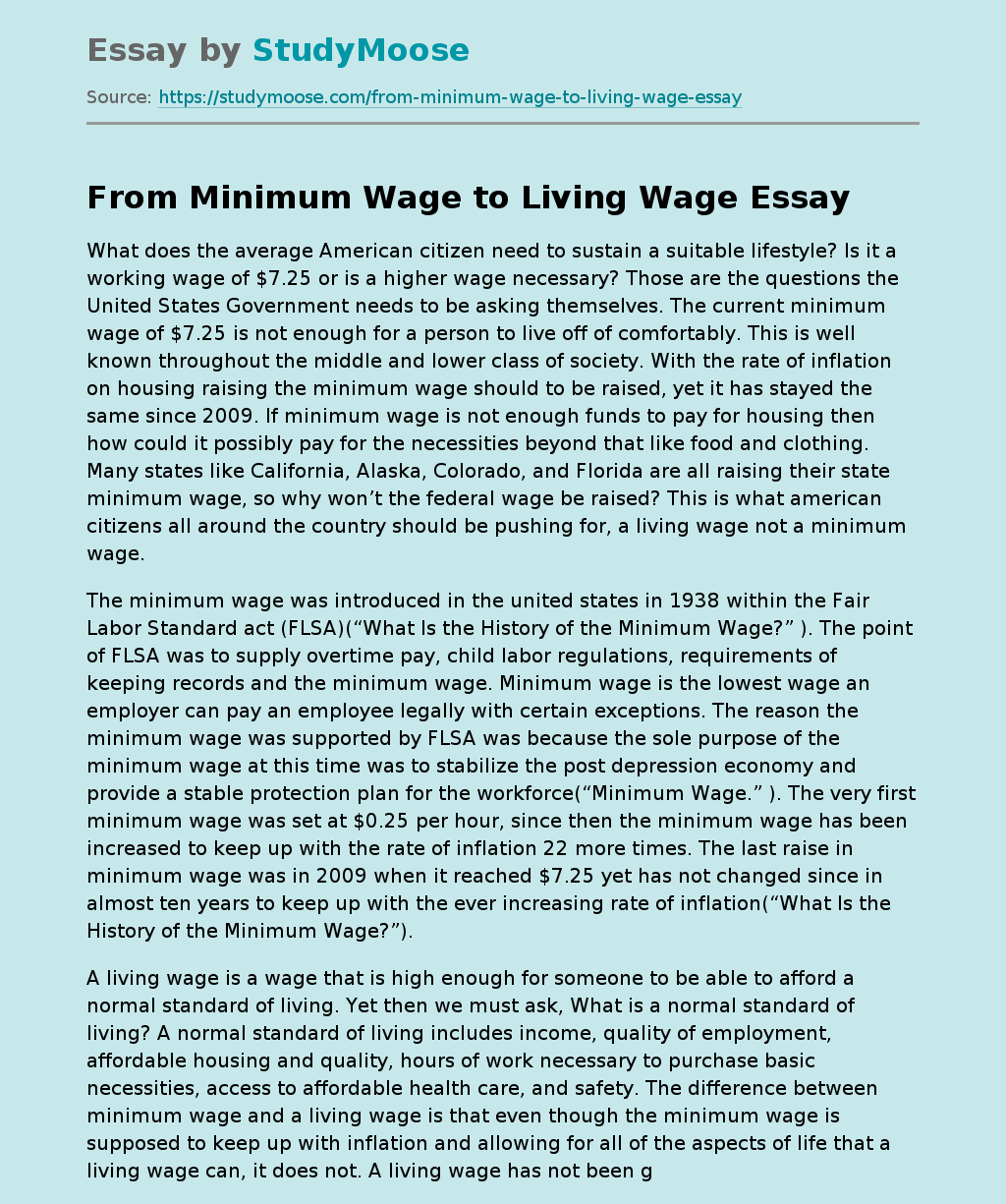