Lysander and Hermia, Demetrius and Helena, Titania and Oberon, Pyramus and Thisbe 1) Exposition: Lysander and Demetrius both want Hermia’s hand in marriage – Lysander because of love, Demetrius because of the position and power it would afford. Demetrius wants to marry Hermia to gain her father’s favor, along with his power and position. Helena is in love with Demetrius, who will not give her a second look. Titania and Oberon are angry with each other, jealous over each other’s fascination with Theseus and Hippolyta respectively.

Don't use plagiarized sources. Get your custom essay on
“ Freytag Pyramid of “A Midsummer Night’s Dream” by William Shakespeare ”
Get custom paper
NEW! smart matching with writer

Pyramus and Thisbe cannot be together and can only whisper through a wall.

2) Inciting Incident: Hermia’s father orders her to marry Demetrius or commit herself to a nunnery forever. Helena finds out Hermia and Lysander are running away. She tells Demetrius so he will forget about Hermia and give her a chance. Bottom and gang steal away into the wood to practice for the play. Oberon casts a spell on Titania that she would fall in love with the first thing she lays eyes on.

Helena follows Demetrius into the wood desperate to make him love her. Bottom and gang steal away into the wood to practice for the play. The lion approaches and scares Thisbe, who runs off. 4) Climax: Oberon orders Puck, to put a love spell on Demetrius so that when he awakens he will fall in love with Helena.

Pyramus arrives to find Thisbe’s mantle torn and bloody. 5) Falling Action: The two men fight over Helena while Hermia watches in horror. Hermia and Helena begin to fight. Oberon begins to feel bad for the poor mortals he has cast his spells upon. Pyramus believes Thisbe is dead. 6) Resolution: Puck applies the remedy to Lysander’s eyes while he sleeps, returning his love to Hermia. The lovers awake, Lysander and Hermia in love and Demetrius and Helena in love (though not knowing exactly why). Oberon removes the spell from Titania, who draws back in horror at the sight of bottom next to her.

Believing Thisbe to be dead, Pyramus stabs himself and dies. 7) Denouement: The four lovers come together with the consent of everyone and watch a play of a Romeo and Juliet-style love story. The lovers ponder the meaning of love through the tragedy of the play, the mystery of what happened in the wood looming over them. Shakespeare concludes with an epilogue by Puck, the wood fairy, apologizing for any offense for their play with the mortals. Titania and Oberon celebrate Theseus and Hippolyta’s marriage, finally happy with each other. Thisbe finds Pyramus dead and kills herself. The lovers are finally together in death. 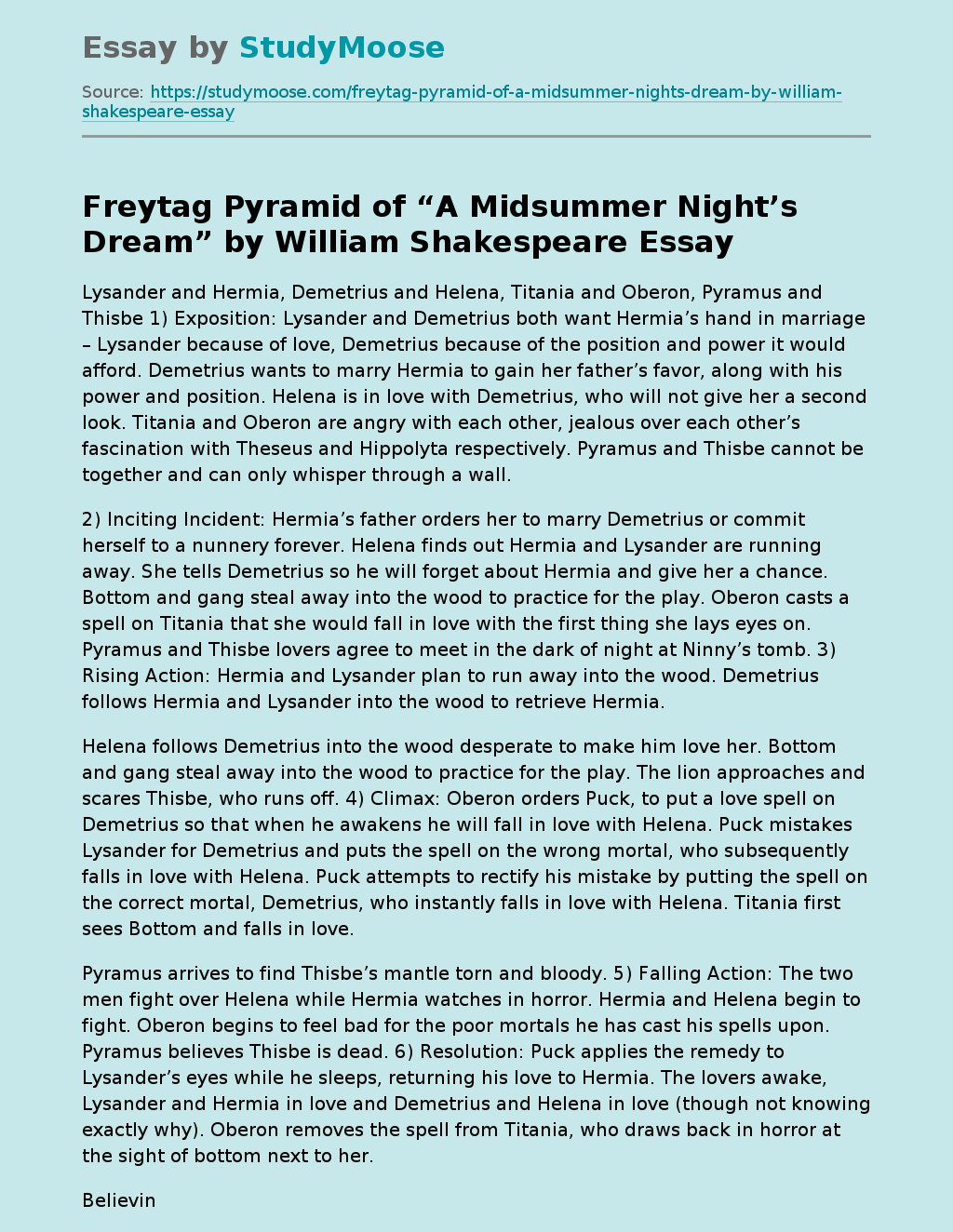