In social, historical and political context I will cover how Kafka is also linked to metamorphosis from his ideas. I will also link him to Befokk. I will look at Berkoff and link his back ground to Metamorphosis. I will also look at what the critics say about Befokk. Franz Kafka was one of the major fiction writers of the 20th century. Kafka is among the most influential in western theatre. His stories such as metamorphosis and the novels including the trail and the castle, concern troubled individuals in a nightmarishly impersonal.

Don't use plagiarized sources. Get your custom essay on
“ Franz Kafka’s Ideas ”
Get custom paper
NEW! smart matching with writer

In Kafka’s life he was unhappy with his working time schedule, this links to the play as Gregor was not happy with his working days but had to do it to keep his family. His father often referred to his son’s job as insurance officer as a Brotberuf, literally bread job a job only done to pay the bills. That is a link to the play as Gregor only worked to help his parents to pay for the bills and that is how Kafka’s father thought of his job.

Kafka showed a positive attitude at first, dedicating much of his free time to the business.

This is just like Gregor as he spent all his free time studding on the job and put a lot of hard work and good effort into the job. Kafka was supported by his family but mostly by his younger sister Ottla. This links to Gregor and his sister Greta and that he was treated like Gregor within the sister relationship.

Steven Berkoff is an English actor, writer and director. He is patron of the nightingale theatre in Brighton. He trained to be an actor at the Webber Douglas Academy in London and latter in Paris.

In 1968 after working in repertory theatre, he founded the London theatre group. Berkoff has adapted a number of other classic works for the stage including Kafka metamorphosis. Berkoff was very influenced by Antonin Artaud. Artaud was born in 1894 he was a French play writer, poet, actor and director. Artaud said that the theatre should affect that audience as much as possible, therefore he used a mixture of strange and disturbing forms of lighting, sound and performances.

Critics say that the people that have seen metamorphosis are not likely to forget his dynamic stage presence. But all his project and writing in various genres have in common is the intensely personal dimension that he brings to them. Befokk is one of the major minor contemporary dramatists in Britain and due to his self-fashioning as a bad boy of British theatre. The use of language is that Gregor talks to the audience allowing them to think about his character and his predicament. Gregor also uses direct address to the audience, explaining what he was feeling.

Gregor tells the audience his thoughts because he is on his own and has no one to talk to because his family do not understand him. “Oh I could weep with joy and satisfaction-god I was starving. The characters take role of the narrator because they are telling the story and showing that it is important. “He felt grate pride he’d been able to provide for his parents and sister in such a fine flat”. Naturalistic dialogue is used in the plays as the character talks to each other in a different manner to try and represent a real family and a real life.

“Mrs. S: did he drink it? Greta: he obviously doesn’t like it anymore”. Stylised and rhythmic language is also used in the play to support a theme or a mood that is made by the characters. Rhythm and reputation are very much part of the language of this play, increasing sense of monotony and routine and ritual that is important to the life. “Nuts yes! Raisins. Yes! Apples. Yes! ” Gregor is also able to talk to himself through soliloquy. He becomes a representative of a human being or everyman figure.

Nonverbal communication (NVC) is usually understood as the process of communication through sending and receiving wordless messages. Such messages can be communicated through gesture; body language or posture; facial expression and eye contact. Speech may also contain nonverbal elements also, written texts have nonverbal elements such as handwriting style, spatial arrangement of words, or the use of emoticons. In our lessons we have been looking at NVC and we were put into groups and had to look at the stage directions and show what the characters are feeling.

There were 4 people in the group and three of us sat on stoles to represent the family and the 4th person was standing behind us acting as a clock, making a ticking nose to represent a daily routine. We were sat down eating our dinner in the jerky movements to the time, and then suddenly the ticking stops and we had to turn around in slow motion. “they move now in very slow motion beginning to show anguish” we tried to show that we felt anguish doing this made me understand more of how the character was feeling at that time in the play.

We had to show our felling thorough our facial expressions In the lesson we have been looking at vocal awareness. Vocal awareness is a technique that you use with your voice. They way you deliver your voice to the audience. There are many different types of ways of using vocal awareness witch can be the use of the pitch the level of shrillness of your voice can be changed. Using range is the use of your voice to it very limits. The pace can be changed to fast to slow the delivery of a scene governed by the play script words.

Using pauses and silences can bring the scenes to life and give the audience a chance to think of what has just happened. The tone is used a lot in every scene weather it is soft, light, harsh and whisper. Also changing the volume can make more meaning to the scene. When we was put into the groups, we had to look at a piece of script and change the use of voice that we use, as we looked at the different types of voices that we could use we had to also change the moods and facial expressions to help make the way we was saying the lines more enthusiastic.

What we did in a group was that we made more use of our voice by using different tone and volume. Saying all the lines together it made our voice more louder with out shouting at the top of our voice. Also as we said it all together then straight after that we would be come different characters and make it out that we was asking Greta a question or even being really happy about it and would repeat what she would say to give it more meaning to the words. Also when I had to say Gregor’s line witch was just “or” I made it out so I would try and get peoples attentions to say this is what happens in our daily routine.

Also at the end of the part of script we had to look at was Image – eating – silent mime. We had to do a silent mine witch is act like we was talking but eating at the same time when we done this we showed no emotion our face. In the si?? ance we did not use any pauses as we did not want to reflect what we just said. The pace changed within the scene as we wanted what we was saying to come across to the audience as happy and then get sadder and more upset. 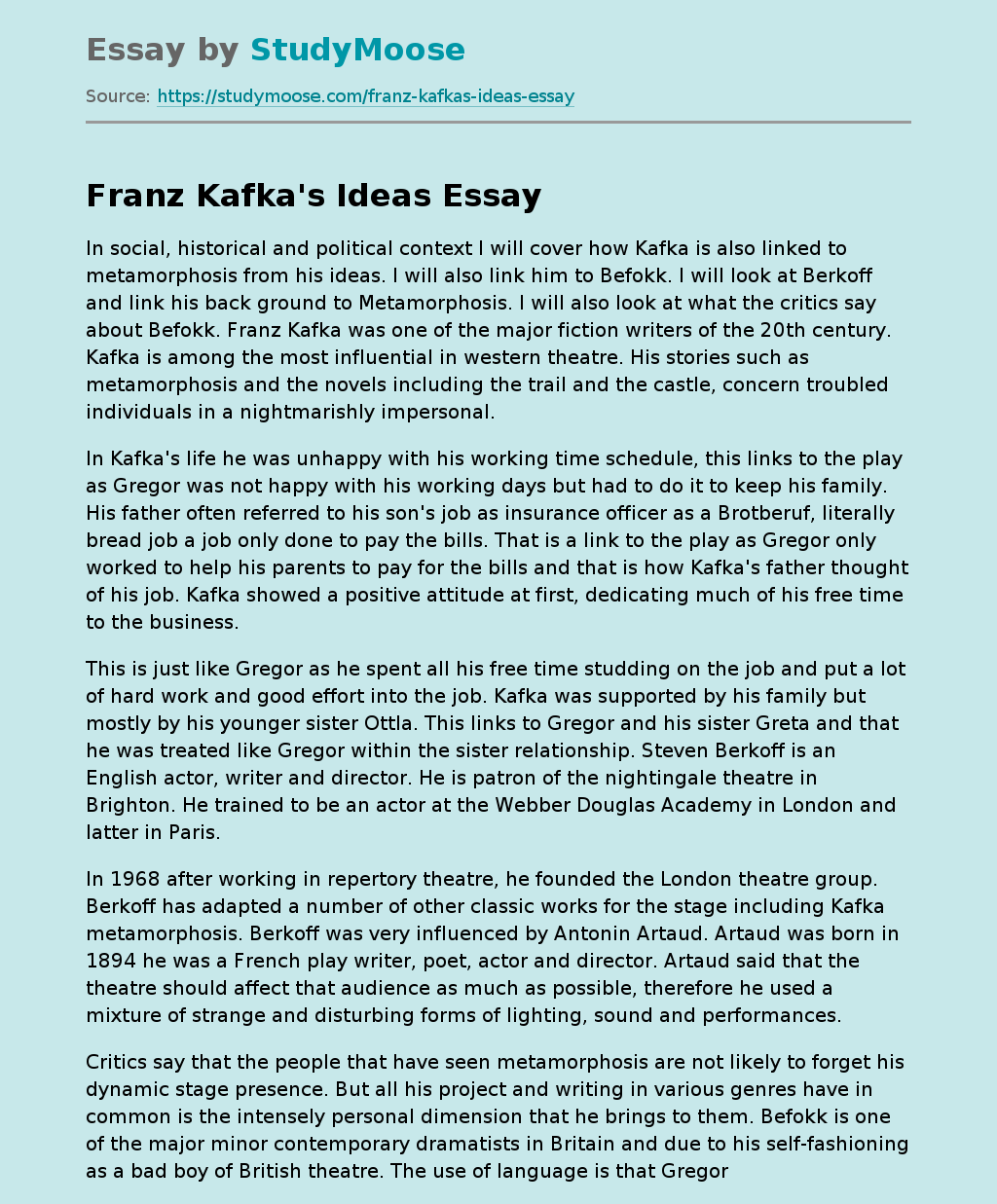