Mary Shelley in her novel “Frankenstein” studies a problem of human nature, comparing thoughts and actions of two main characters. The plot of a story is devoted to the creation of a new human and alienation of it by society. A question of the relationship between the creator and his work was tried to solve not only scientists but also science fiction writers.

According to the author’s intention, Victor goes from the euphoria of God to hominal primitivism in relation to the monster he made.

Turn in your highest-quality paper
Get a qualified writer to help you with
“ “Frankenstein” Essay Introduction ”
Get high-quality paper
NEW! AI matching with writer

As a “father”, he must show much more compassion and patience than ordinary people. The litterateur showed an image of a newborn who came to the world with aid of science and technological progress. Like any child, he does not possess any knowledge and draws all the skills from surrounding world. His upbringing is a matter of time.

Instead of help, the protagonist chooses to ignore and to avoid responsibility. Frankenstein feels so unfair attitude and responds in the same coin, refusing promises he has given.

In fact, we are talking about retribution of the abandoned child. The motives of an inventor can be explained by his initial disappointment, which he experienced at the sight of the finished “product”. A creature was not as beautiful as in his fantasies and deprived him of the desire for further experiments.

It was the obsession with knowledge prevented Victor from foreseeing the consequences of his insane fanaticism. His revolutionary nature brought not helping but only suffering to the family.

In this context, our hero is an active tool in the hands of science. Intellect serves not as the blessing of heaven, but as a real curse that spawned a murderer.

A dominant reason for the hatred is rejecting appearance of Frankenstein. Focusing on such a primitive criterion, individuals did not seek to get acquainted with him, much less to close communication. Such ostracism leads to despair and rejection of people. Perhaps the murder of immediate family members played a symbolic role. Frankenstein wanted Victor to feel how hard it was to be devoid of love and to remain alone.

Not only does birth determine the character of a person, but also his/her environment. If Victor showed sincere participation in “his offspring”, and did not perceive it as a plague, events would unfold in a different way. But he is just a person who quickly lights up with ambition and retreats just as fast.

Thus, Mary Shelley’s “Frankenstein” does not lose its relevance in our time. Modern technology allows you to create artificial persons. An attitude toward such a perspective ranges from a complete aversion of similar future to absolute support. Probably, the writer tried to warn that some phenomena are better left untouched. 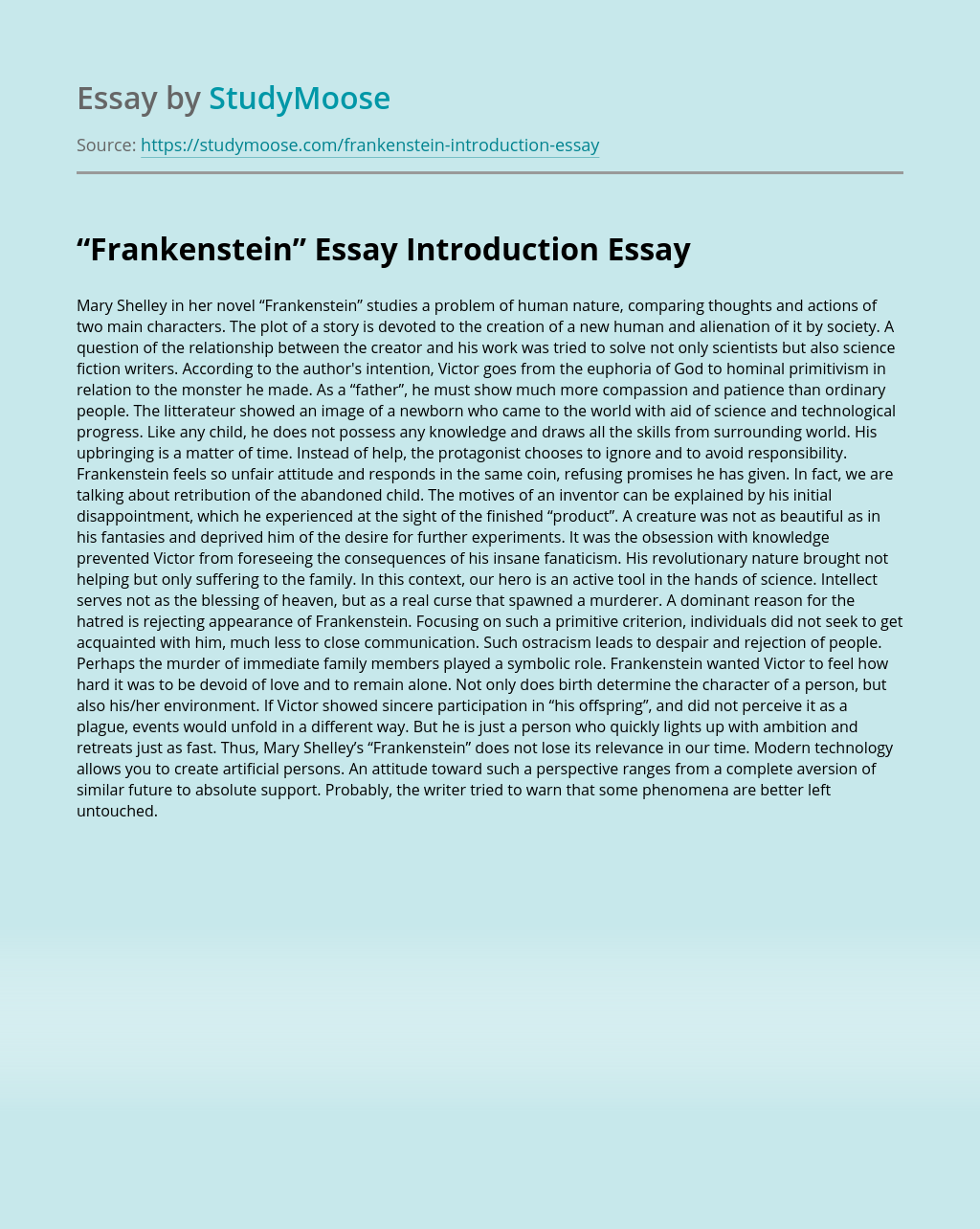 Turn in your highest-quality paper
Get a qualified writer to help you with
“ “Frankenstein” Essay Introduction ”
Get high-quality paper
Helping students since 2015
Stay Safe, Stay Original