Forms of abuse which may be experienced by adults

Describe forms of abuse which may be experienced by adults (P1) Abuse, defined by the department of health is described as “a violation of an individual’s human and civil rights by any other person or persons” and those most at risk are described as ‘vulnerable adults’. A vulnerable adult would be someone who is unable to defend themselves or understand what is going on due to having cognitive or physical disabilities, frail older adults, substance abusers and more. There 9 main types of abuse that may be experience by adults and these are physical, sexual, psychological, financial, neglect, institutional, discrimination, self-harm and domestic violence.

Don't use plagiarized sources. Get your custom essay on
“ Forms of abuse which may be experienced by adults ”
Get custom paper
NEW! smart matching with writer

Physical abuse can be described as any physical contact but it depends on the force used, the nature of the contact and the intention behind the action. People who may physically abuse vulnerable adults are care workers within a nursing home who get frustrated and lose their temper because a service user is being difficult or is acting in retaliation.

Physical abuse can include hitting, punching, kicking, pinching and slapping which are all the sorts of actions involved in bullying. Care workers may use these actions as form of retaliation from a confused service user hitting them, however this unacceptable. An example/scenario of physical abuse would be:

Nigel refuses to be washed by the care worker despite the workers best efforts and out of frustration from the worker trying to wash him he tips the bowl of water all over the floor with some of the water hitting the worker.

The worker loses her temper and hits Nigel to try and teach him a lesson not to do that next time. Signs of physical abuse to look out for are unexplained bruising, burns, abrasions or fractures which seem suspicious or have not been reported in an accident report form. Sexual abuse can be described as anything from inappropriate touching to rape. It is inappropriate and in some cases illegal for a professional to engage in a sexual relationship with someone in their care. People who may sexually abuse can include family and friends if the adult is in domiciliary care An example/scenario of sexual abuse would be:

Sally is an adult with a learning disability which causes her brain age to be younger than her physical age. A care worker at the day centre she attends tells her that he is going to marry her and asks him to perform sexual acts on him. Due to her limited understanding of the situation she may do what the care worker asks thinking they are going to get married but due to her learning difficulties she is unable to understand that a) she is being taken advantage of and b) unable to give her full consent.

Signs of sexual abuse to look out for are any genital or anal infections, difficulty with walking or sitting as well as bruising on the inner thighs or hips or any of these signs along with bruising to the wrists or arms where force has been used to detain an individual. Neglect can be described as a failure to provide proper care and attention to an individual and can sometimes be self-imposed due to mental health problems. This would be done is they are unable to motivate themselves and therefore have poor hygiene levels. An example/scenario of neglect would be:

An elderly man named Michael lives alone in his home after having a stroke and is cared for by his 23 year old son due to having limited mobility. Michael’s son has spent the weekend away partying with friends and hasn’t arranged another person to check in on him and prepare meals or give him his medication. This means that he has gone without hot meals and has had to eat sandwiches or crisps pre made in the fridge as well as not take any medication he requires. This would be neglect as a form of abuse.

Signs of neglect to look out for are neglected bedsores, malnutrition, medication left in the Dosette box and a lack of clean clothing. Financial abuse is an illegal or improper use of an elder’s assets and can also be referred to as exploitation. Financial abuse is often done by family members or friends as well as domiciliary care staff. It is does happen but is least common in a nursing home as service users do not have their assets in the nursing home. An example or scenario of financial abuse would be:

Laura an elderly lady has a care worker come over to her home 3 times a day to check that she is washed, dressed and fed etc. Laura leaves her purse in the bowl in the hallway which she has always done for years and is now a habit. She notices that she doesn’t have as much money in their as she thought she did and worries that she is becoming forgetful when in fact one of her carers is helping themselves to her money without Laura realising. Other forms of financial abuse can include cashing cheques without permission of the account holder, taking money or property and coercing or deceiving the adult into signing legal documents that sign over their assets. Signs of financial abuse to look out for are a lack of bank statements, missing assets or property and be cautious if the carer has a substance habit.

Forms of abuse which may be experienced by adults. (2016, Sep 23). Retrieved from https://studymoose.com/forms-of-abuse-which-may-be-experienced-by-adults-essay 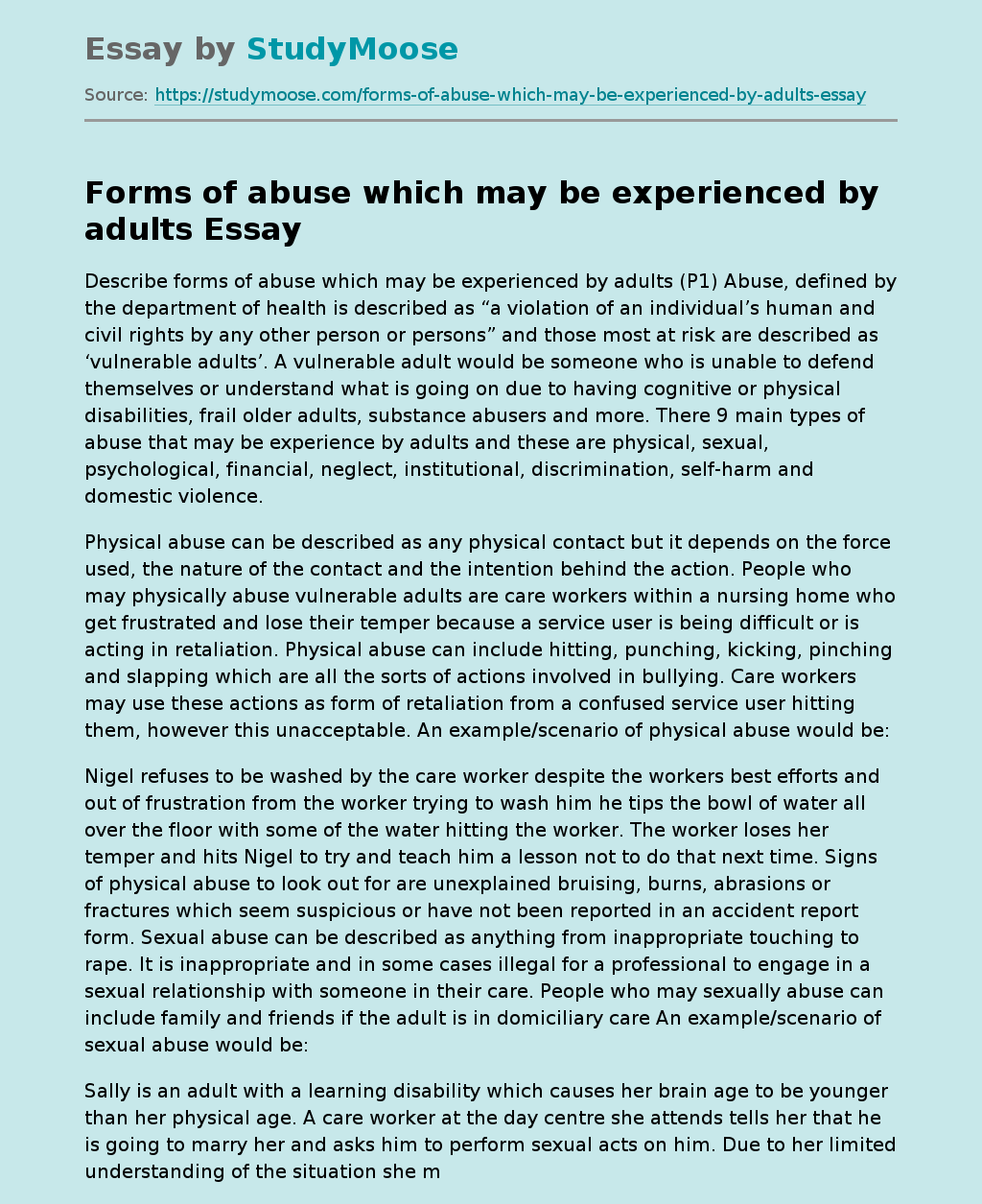