Some cultures prefer to stick to the facts of a situation and not to enter into close relationships, while others want to get to know people better before doing any business.

Neutrality vs. Affectivity dimension questions about the amount of emotion a person shows not what a person feels. Some neutral cultures see control of the feeling as a sign of civilization. Affective cultures express their emotions openly.

There are two important questions for workings with different cultures are: should emotion is exhibited in work relations? And should it be separated from reasoning processes in case it affects them for the worse? U.

S. A tends to show emotion, but separate it from objective and rational behind decisions. This dimension can also be illustrated well through speech patterns. In Anglo- Saxon cultures, when one person stops speaking another starts as it is seen as impolite to interrupt. In some cultures such as India there is often a silence between one person speaking and another person that replies back or speaks.

This is to digest and understand what has been said and it’s a sign of respect. U. S. A management and other western countries sometimes interpret this as a failure to communicate. Indian management will not be impressed if the U. S. A management do not respect what they believe is the right way to behaviour. Communication is seen vital when ever any business managers attain meeting. Indian’s enjoy opinionated conversations so Anglo Saxon manager should give their opinions when required; showing they are taking an active part in the conversation.

Inner Directed vs. Outer Directed dimensions also questions whether a person feels that they control the environment or that their environment controls them. Outer directed cultures feel that they must live in harmony within their environment. Clashes can occur when people from Inner Directed Cultures, e. g. Westernised countries, believe they can impose a strategy or way of doing things on non westernised countries. Fons Trompenaars (2003) Managers from directed cultures believe that behaviour is designed to motivate people into doing what they have already formulated.

They try to win others over to their way of thinking, but it’s sometimes comes across as aggressive and uncivilized behaviour in outer directed cultures. The approach that U. S. A management should take when discussing business with India is, they should be careful about the way they pose them self and the way they speak to the Indian management. Indians believe that the way that people think and what they accept should be understood by others. Sixthly, Achieved Status v. Ascribed Status dimension illustrates if the person status derivative from what the person does or who they are?

Achieved status relates to what they do and what’s been achieved, while ascribed status means what’s being done is still in the process of what is going to be achieved. Many Anglo Saxons believe that ascribe status for reasons other than achievement is inappropriate to a real business, getting things done. However ascribe status can be seen to have the effect of making people live up to the expectations of their position. When both countries negotiate business deals they will have a problem because U. S. A has achieved status whereas India has not.

Some western cultures think that they have extensive knowledge about how business operates and their aim is to influence the other side. They often think they have reached that level of experience of the ascribed culture in half the time. U. S. A has to comprehend that both management have different levels of expertise and be patient allowing the Indian management do what they believe is the right. U. S. A management should also take a translator to bridge the language difference. In ascribed cultures he or she would be expected to interpret not just the language, but gesture, meaning and context.

Finally, Sequential Time vs. Synchronic Time is the final dimension. This looks at whether a person does things in an order or multitasks. “Sequential indicates a series of passing events whereas synchronic sees past, present and future as interrelated so that ideas about the future and memories of the past both shape present action. ” In these cultures they schedule tightly, so if the other country is late it’s considered to be unprofessional as it affects the remainder of the schedule. Synchronous cultures care less about punctuality meeting someone unexpectedly, for instance, would be given greater importance.

To a synchronic person you show how you value people by giving them time. Synchronous cultures are more collectivist and particularist in valuing people. They carry their pasts through the present into the future and will refuse to consider changing unless convinced that their heritage is safe. Trompenaars seven dimensions framework may give U. S. A methodology about the differences and how the management in U. S. A can best address them. Also it will help them to understand and value the Indian culture and the way they do business with other countries.

All cultures work at various points along the dimensions and finding ways to identify, accommodate and merge differences is likely to provide the most effective relationship with working country. Trompenaars analyses the ways mangers should behave when dealing with other cultures. This theory compared to Hofstede is different. Hofstedes five dimension theory gives a manger the background knowledge of the country. U. S. A management have to know India’s background information for meetings with Indian management. Whereas Trompenaars dimensions illustrates the way to behave and value other cultures when doing business.

In conclusion the Anglo Saxon mangers from U. S. A have cultural pitfalls however to over come these; an Anglo Saxon manger should gain knowledge about the Indian culture. The Anglo Saxon manger should acknowledge that the definition of management differs in each culture, which also Hofstede and Trompenaars stated in their theory. The both theorist would help an anglo saxon manger to increase their knowledge about other national country. Both management differ because they both have different values and norms which they believe and way they lead their team is completely different. The U. S. A will definitely have many pitfalls while doing business in a country like India. 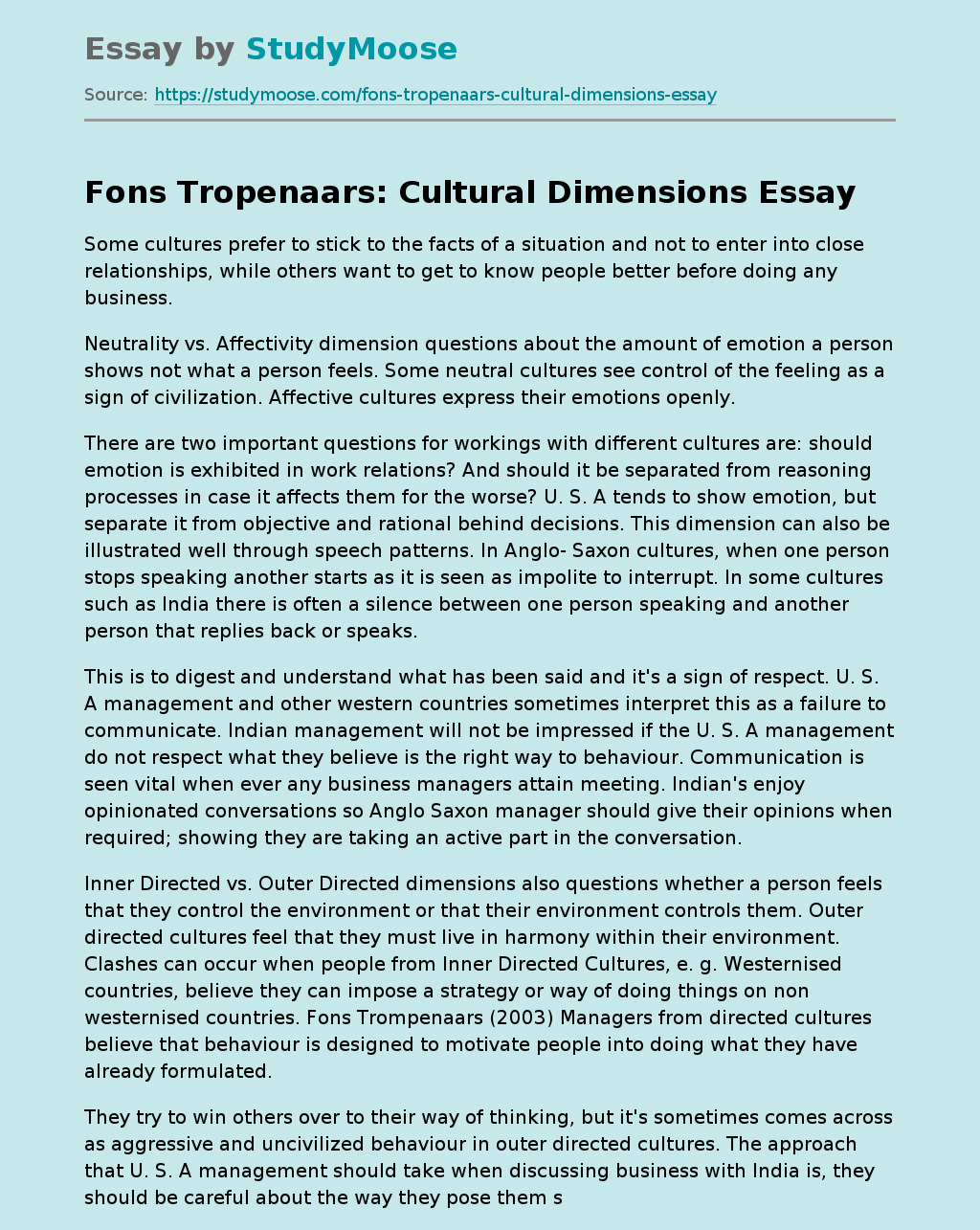