Don't use plagiarized sources. Get your custom essay on
“ High Power Distance ”
Get custom paper
NEW! smart matching with writer

Simultaneously, leadership have privilege. If something goes wrong, the subordinates are usually blamed for not doing their proper job. It like teachers always treated respectfully. For example, “In Laos, any movement was restricted, and visitors had to be reported to the village head. If in rural villages, disputes are handled as much as possible by village committees, usually made up of senior men.

Then, intravillage disputes are handled by the district administration, with attempts to follow party guidelines and local customs”.

Ja-Ma, 2013). Therefore, high power distance culture environment make Laos people used to obey the leadership or supervisors controls and commands. Meanwhile, this cultural backgrounds reflected leaderships and subordinates power distance in Laos. Collectivists Secondly, in Hofstede’s cultural Dimensions have ‘individualism-collectivism’ concept. It is relative important of individual vs. group interests. “ In individualism societies, ties are loose and everyone looks out for himself or herself.

In collectivism culture backgrounds-Laos, if somebody openly speaking one’s mind, will appears distasteful and face open expression risks. At the same time, the right to privacy in then sense of freedom is nor recognized. Then, one’s business is also the business of the group, friends should be concerned with each other’s personal matters.

For example, “ Laos people typically socialise as families, and almost live in extended families with three or sometimes more generations sharing one house or compound. Then, The family cooks and eats together sitting on the floor with sticky rice and dishes shared by all”. (Anon. , 2012). So, through this case shows that collectivism is one of Laos culture symbol. And, Laos people not only no reject collectivism, but also enjoy group lifestyle. High Uncertainty Avoidance Uncertainty avoidance describe one consciousness of avoiding uncertain things which may bring risk.

Laos as a Asian countries, of course, is huge uncertainty avoidance culture. Lao do like to take risk which led them to change. They want to live in their safety zone. In other hand, a country with high uncertainty avoidance, its people can not endure ambiguity and prefer to fixed modle. So such country would have many laws. In the workplace, means there are many rules in order to keep running every things routinely. Laos is a country that deeply influenced by Buddhism, over 90 percent of people are buddhist, so the characters of lao is peaceful, calm, un-risker. In the sector of workplace.

Although there is a little change, in addition,government pay attention to human rights, Employers still trend to respect the senior staff’s and boss’s idea and company with the regulation and rules of company. In some laos company, boss could beat with staffs when they make mistakes. The peaceful character of laos make them timid and cautious. The students in laos like staff, teachers are boss. Teachers considers students who do as regulation of school and study hard as good students. If students do beyond regulation, teacher would redefine them. It seems little of freedom in education due to un-risker culture.

Masculinity The position of Women in laos is complex. In the North or Middle area of Laos, women take the huge responsibility of their family, but they get little recognition from their husbands, although government set policy of equity between men and women. Furthermore, women in that ares would inherit all property of family, such as house, land. However, if a woman birth in a rich family, his husband would move to her family and do what woman require him to do. But in normal families, women show more respect to their husbands and meet husbands’ requirement.

In workplace, women seem to be in a important position. About 63% percent of informal organization or private organization are managed by women. The majority of entrepreneurs are women. It seems that Laos workplace culture are feminity. But list a example of teachers in school. Masculinity score of Laos is 37, which is less than others countries, New Zealand 58, Canada 52. In intensive masculinity society about 140, which all of teachers in university are male, by the reason that men are better to analyze than women by scientific evidence. However, in Laos many women participate in education.

Even so, it just prove that Laos is Masculinity culture with little feminization just like female president appears. Long Term Orientation LTO is the last dimensions Hofstede presented in 1990s due to his find of different culture between eastern and western, its oppose to STO(short term orientation). Many western countries are STO, laos as eastern country, is LTO. LTO culture includes the characteristics of family is basis of society, parents have high authority in family, high work ethic. These reflect on respect tradition, do not waste, loyalty on work, respects others avoid lose their faces.

Laos just like chinese that do not waste and have a habit of saving in case trouble occurs, for example, getting ill and need huge amount of money to pay for fee of treatment. This situation is possible due to uncomplete welfare in the country. In other hand, laos influnced deeply by Buddhism, which is another reasons led to LTO. Buddhism has a word called “merit” that is got from daily good behavior, until a men get enough merit, he get good outcome in last time he return to world. So Buddhist tell men to be honest, loyal, good men now in order to get good future. Hence, lao have long term orientation and do well in today. 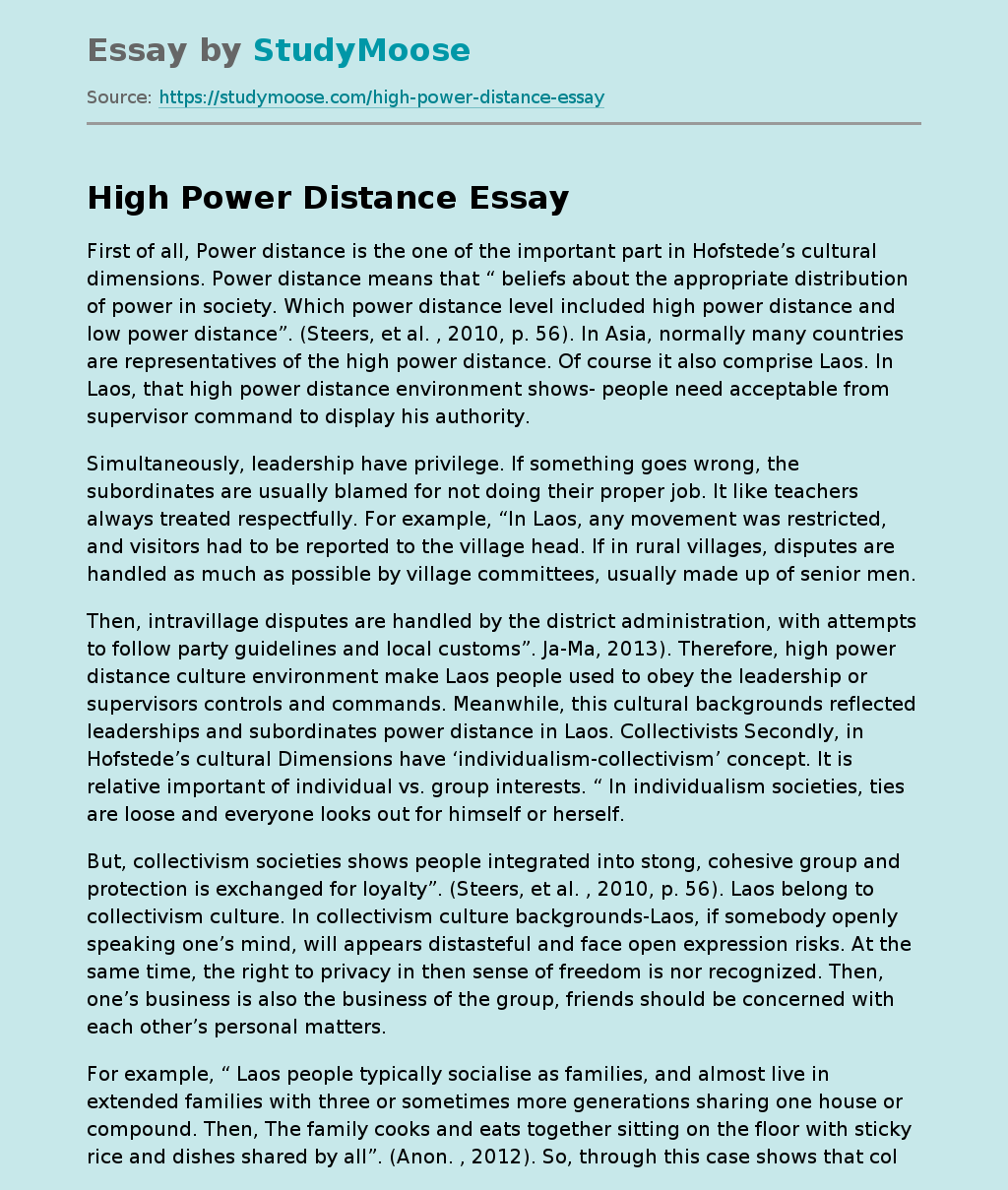