How is reality seen by each specific approach

Reality is seen as an agreed upon consensus that occurs through social interaction of members of a system (Goldenberg & Goldenberg, 2004). According to Becvar, D, 2009, reality is seen from a plane at the level of simple cybernetics were we place ourselves outside the system as observers of what is going on inside the system.

The metaphor that is being used to describe this process is a black box, “it describes a system whose operation we attempt to understand by observing what goes into and what comes out of it.

Don't use plagiarized sources. Get your custom essay on
“ First and Second Order Cybernetic Approaches About Truth ”
Get custom paper
NEW! smart matching with writer

”(Becvar, 2009, p. 66) Therefore in a first cybernetic approach we do not see ourselves as part of the system and we are not concerned why it does what the system does, but the focus is on describing what is happening. We always look at the balance between stability and change. The main meaning of a first cybernetic approach is that it views reality as external to the observer.

First-order cybernetics assumes that the system being observed is separate from the observer, who would be able to objectively observe the system from the outside and influence it, without entering the system itself (Goldenberg & Goldenberg, 2004). According to first-order cybernetics there is one objective reality and our differences in opinion about the same system, is only due to our different interpretations of the same reality (Becvar & Becvar, 2009). Through reality we operate in consensual domains that are generated through structural coupling in a common language system.

Every person creates and lives in a different manner that is based on our own unique combination of heredity, experiences and perceptions. Therefore each person creates a different reality. ” (Becvar, 2009, p 84. ) Second cybernetic approach reminds us that the problems and solutions to a problem are framework relative. The example of a stick in water is being used to describe this approach very well. When a stick is partly immersed in water, it seems curved when one looks at it and straight when one touches it, but in reality it cannot be both curved and straight. While appearances can be opposed to each other, reality is coherent. ” (Becvar, 2009, p. 350) In a situation like this it is very reconcile to see the differences and to consider what the incompatibilities of the situation is. “We thus discern data that are significant and data that are misleading. ” (Becvar, 2009, p 350) Second-order cybernetics on the other hand assumes that there is no such thing as reality.

There is no absolute, objective system, but for each person there is a different system, which is absolutely valid (Becvar & Becvar, 2009 2. How is health and pathology addressed by each approach? Health Barsky, 1988, p. 416: relate the “utopian syndrome” to physical health, which states that we create problems by creating unrealistic standards. He notes that the individual’s sense of his or her own healthiness has declined (Becvar, 2009, p351). “The increased scrutiny itself amplifies discomfort and dysfunction and results in a more negative appraisal of one’s health” (Barsky, 1988, p, 416).

Barsky(1988, -416) states that it is harder to feel confident about one’s health when sensations and dysfunctions one had are portrayed as ominous of some unrecognized and undiagnosed disease. Feelings of ill health and disability exists when every ache seeks medical attention, every twinge may be start of a malignant disease when we are told that every mole and wrinkle deserves surgery. Barsky’s observations seems relevant to efforts to reduce the incidence of mental, marital and family problems, especially through prevention. The observations stated above and the effort at prevention is part of the first cybernetic approach.

In order to define pathology, one would have to have a definition of normalcy, hence an objective reality of what normalcy entails. Pathology would thus only exist as a subjective truth. What constitutes normalcy for the one person may be seen as pathologic by the next. First-order cybernetics, on the other hand, does allow for the diagnoses of pathology as reality is seen as an objective truth of which individuals only have different perceptions.

According to a second cybernetic approach there are no problems in the cosmos and it is a unified whole in which everything fits, it is coherent and it makes sense to the methority (meerderheid). The problems that we treat are the specific problems of a given reference. (Becvar, 2009, p. 349)=pathology A healthy system uses the available energy in a coherent manner and thus the distribution of energy is effective while an unhealthy system may devote too much energy to a single aspect at the expense of other aspects (Becvar & Becvar, 2006). Added to this, the idea of healthy or not healthy is related to how the family view themselves.

According to Becvar and Becvar (2006), the main concern of the therapist is how families do best what it is they want to do rather than with what they are doing. Health is defined as the family’s success in functioning to achieve its own goals (Becvar & Becvar, 2006). These goals and this structure is determined by the family itself and not by the therapist. Becvar and Becvar (2006) state that a happy family is one in which happy things happen. Families who choose to devote their time and energy to positive processes have less energy available for negative processes and vice versa.

Positive processes have a revitalising effect while negative processes weigh down the system (Becvar & Becvar, 2006). =health Conclusion:At the level of simple cybernetics we can observe a system and decide how healthy or pathological it is. Second-order cybernetics does not accept any definition that implies good or bad with respect to the system. A system responds to various perturbances in a manner that is consistent with its structure, therefore, all systems do what they do and cannot be seen as pathological unless we call it that (Becvar & Becvar, 2006). 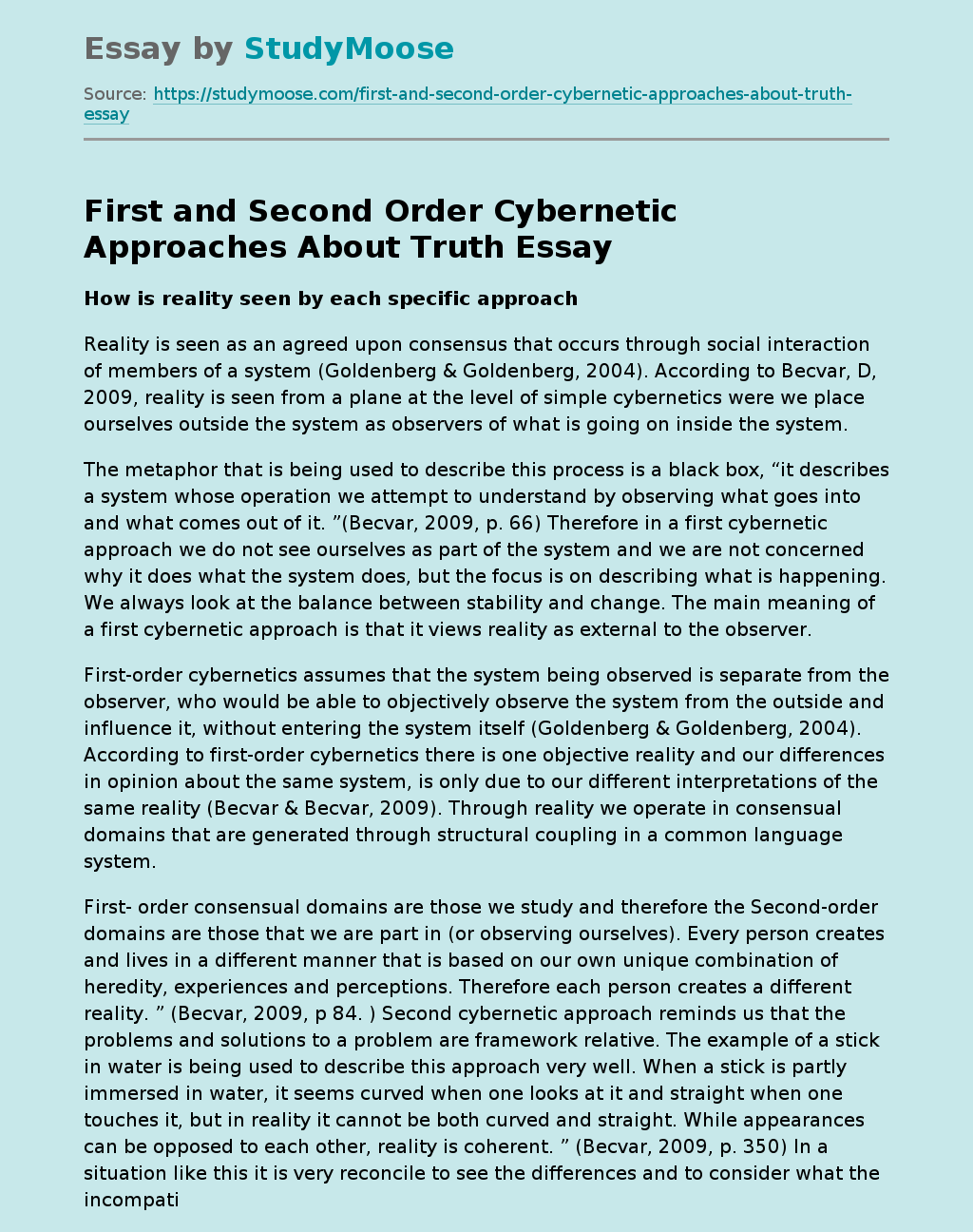