Even though some people believe that being homosexual is a choice made by an individual either as a way to rebel or as a perversion, the Lesbian, Gay, Bisexual, and Transgender community (LGBT) deserve the same rights that heterosexuals are entitled to. Rights such as the right to be married in more than just a few states and the right to openly serve in the military without the fear of being discharged.

Lately there have been several news stories that involve the LGBT in some way, the biggest being the teens that committed suicide because of bullying in school or over the Internet.

Don't use plagiarized sources. Get your custom essay on
“ Final Expository – LGBT ”
Get custom paper
NEW! smart matching with writer

It is stories like these that make a person wonder if there will ever be a day that the LGBT are accepted or at least be left alone to live their own lives as they are. So many people are being discharged from the military because the word got out that they are homosexual, including officers that have been in the military for years.

This should not be allowed to go on.

These men have literally been risking their lives for years for no reason but pride in their country and they are discharged because they are seen unfit to serve the country. Gay rights is a big topic in the United States right now and is the main focus of this expository essay. The LGBT community deserves the same rights that everyone else is entitled to. According to research, in 1779, Thomas Jefferson proposed a law on any gay man or gay woman that, if broken, would mean the men would be castrated and the women’s nose cartilage would be mutilated (Head, 2010).

The U. S. Supreme Court finally put a stop to laws like these after enforcing them for 224 years (Head, 2010). In 1951 the first national gay rights organization was founded, but because of the times it was too dangerous and not to mention illegal so they had to meet in code (Head, 2010). In 1969 the gay rights movement really accelerated, after raiding a gay bar in Greenwich Village and arresting employees and drag performers the NYPD got more than they bargained for, a crowd of more than 2,000 gay, lesbian, and transgender upporters of the bar took on the police and forced them into the bar which caused a three-day long riot. Since then there have been several presidents and businesses that have “come out” as supporters of gay rights. There were states that started to let gays get married and some that started to then took it away such as California recently. One would think that of all the rights that should automatically be given to the LGBT, the right to openly serve in the military would be at the top. However, that isn’t the case.

Many men and women have been discharged from the military for simply being proud of who they are. Some of whom served in the military for years, risking their lives to keep America safe. America’s history has had several different policies when it comes to homosexuals in the military. Before World War II there were no written policies against homosexuals serving in the military, except that sodomy was thought as a crime by military law ever since the Revolutionary War times (Powers,2010).

However, during World War II, the Korean War, and the Vietnam War, homosexuality was defined as a mental defect and all homosexuals were barred from serving based on medical problems (Powers, 2010). In 1982 the Department of Defense actually came out saying that “homosexuality was incompatible with military service,” in a DOD directive causing nearly 17,000 men and women to be discharged during the 1980s (Powers, 2010).

By the end of this decade, several homosexuals of the military publically came out and challenged their discharges through the legal system and by the beginning of 1993 it appeared that the military’s ban on homosexual personnel would soon be overturned (Powers,2010). After a long debate and congressional hearings President Clinton and Senator Sam Nunn reached a compromise which they called “Don’t Ask, Don’t Tell, Don’t Pursue”, under its terms those serving in the military will not be asked about their sexual orientation and would not be discharged simply for being homosexual.

However, having sexual relations, or displaying any sort of attraction to the same sex, or telling any other military personnel about their sexual orientation is considered “homosexual conduct” under the policy and is a basis for involuntary discharge (Powers, 2010). As of right now “Don’t Ask, Don’t Tell” remains in effect, and will continue to for awhile it seems. President Obama is taking a different stance on the issue and instead of facing the problem head-on is putting it aside for a later date (Powers,2010).

I have faith that one day, maybe not in my generation or lifetime, but someday the LGBT community will be given the rights that they are entitled to as “free” Americans. Although this essay is focused mainly on the fight for gay rights in the United States alone, people need to understand that the LGBT is fighting for their rights all over the world. In Spain, where the kings and queens were once the biggest defenders of the Christian religion, the socialist government has launched a reform that will grant gays and lesbians the right to legal get married and adopt (Graff, 2004).

Even though Europe has a long tradition of protecting gay rights, Denmark was actually the first to introduce registered partnerships between homosexual couples in 1989 (Graff, 2004). The Dutch finally legalized same-sex marriage in 2001 (Graff, 2004). So why can’t the United States? Why are we so far behind in the times? The United States, however, is surprisingly not the worst country when it comes to legalizing gay rights. Spain is actually where the fight is fiercest, even though the government will allow homosexual couples to marry and adopt children, the Church has called on Spanish Catholics to help fight the legislation (Graff, 2004).

Which isn’t anywhere near as bad as Italy, where the Italian parliament has passed one of the harshest assisted-fertility laws in Europe that bans donor sperm, donor eggs, and surrogate motherhood, all of which homosexual couples can take advantage of to have children, and limits assisted-fertility treatments to “stable” heterosexual couples (Graff, 2004). In the United States, same-sex couples couldn’t wed anywhere in the country until 2004. But now, same-sex marriage is legal in six states: Vermont, Iowa, Maine, Connecticut, Massachusetts, and New Hampshire (Vestal,2009).

Currently, the United States is divided on whether or not to redefine marriage. The California Supreme Court approved the voter-approved ban on same-sex marriage but in turn allowed the 18,000 homosexual couples that had married before Proposition 8 took effect to continue to legally be married (Vestal, 2009). On top of this, twenty-nine other states have voter-approved prohibitions that block same-sex marriage in their state’s constitution to try and keep the judges from overturning the bans on same-sex marriage. In polls, a very large amount of Americans re still against equal marriage rights for the LGBT, but these margins are getting smaller (Vestal,2009). If gays continue to be denied these rights they miss out on benefits that heterosexual couples are automatically entitled to. 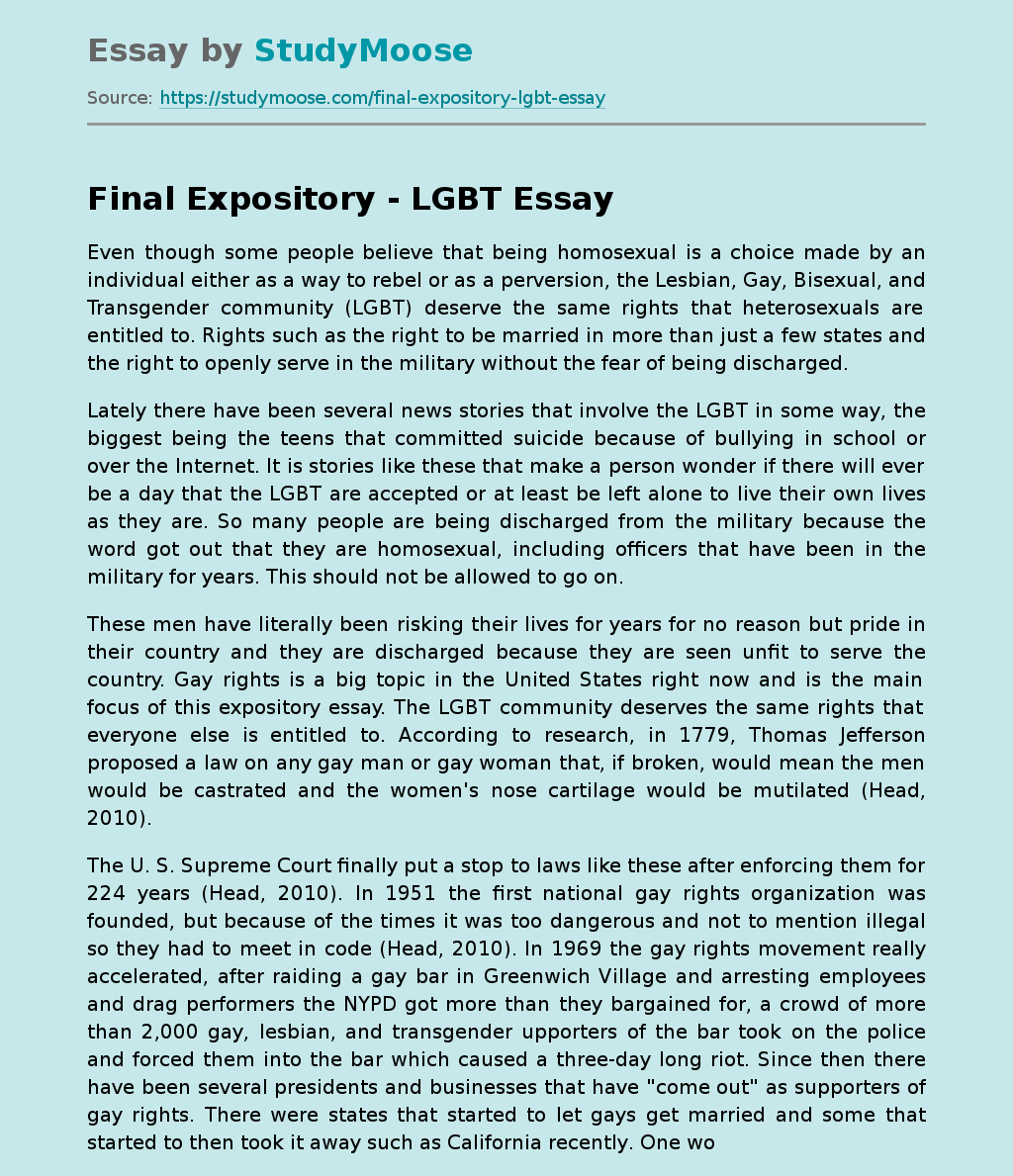