Final Essay Movie Her I really liked the movie when I

* I really liked the movie when I watched it. It is really an impressive movie that I was not used to watch it. The movie is talking about science throughout on another level compared compared to usual science fiction movie: “I robot” like scenario with smart machines that surpass us and try to destroy us. During the movie I had a feeling that this love story might be possible in the future with development of AI technology in our society.

Don't use plagiarized sources. Get your custom essay on
“ Final Essay Movie Her I really liked the movie when I ”
Get custom paper
NEW! smart matching with writer

* For me the movie was a sublimely original film about human connections that feels personal yet makes a haunting statement about all of society. It’s an odd, sad love story, combined with a meditation on technology as an accelerator of social loneliness. Not a small part of it seems to be an allegory or lonely men and their fear to women. So for me this movie raises mostly social questions with a technology perspective.

* I think that virtual interaction is valid and meaningful even without physical consummation.

In his construction of Her’s “tomorrowland” future, I predict that these relationships will not just become prevalent, but socially acceptable, and with few exceptions the characters around. In the movie we see the essence of his relationship with Samantha as a natural byproduct of integrating technology into virtually every life experience in much the same way that sharing one’s aspirations, insecurities, fears, and dreams makes any relationship that much deeper and more meaningful. To my point of view the movie prove how easy it can be to substitute or mistake technology for real human interaction.

* For me having a relationship with an AI it’s a risk because it’s possible to avoid interaction with the outside world, not just ignoring possible problems but retreating from the messy unpredictability of the human beings around him. In a strict sense, Theodore is vaguely aware of the risks he runs by dating an OS; he recognizes the limited feasibility of doing things like double dates with Samantha. But he also fails to consider how consuming his relationship becomes, and the film delicately highlights how he achieves a state of normalcy for himself that estranges him from those around him, such as his friend Amy. Technology is not as reliable as real human connections. It may fail any day. Should there be a global disaster, we may run out of power, which means we cannot charge our laptops and phones and cannot keep the Internet or cell phone towers up. Hence, we will have no more social media and fake online relationships. The relationships with real humans around us will benefit us more. The real people are the ones who can help us build shelters and make important survival strategies, as opposed to the people we don’t really know online.

Last two questions in one :

* I think that Theodore represents a futuristic everyman, the result of human experience enshrouded and infused by technology. What promises to give us connection and communication results in precisely the opposite, the illusion of relationships. I think it proving that there is no equivalent to human feeling even a machine or a program can not get that. How ever it can become more sophisticated or finding some solution to compensate this no physical existence with another thing. But still for me it’s kind of impossible replacing some human feeling by a an AI program. It can work but never such as human love.

Final Essay Movie Her I really liked the movie when I. (2019, Dec 06). Retrieved from http://studymoose.com/final-essay-movie-her-i-really-liked-the-movie-when-i-example-essay 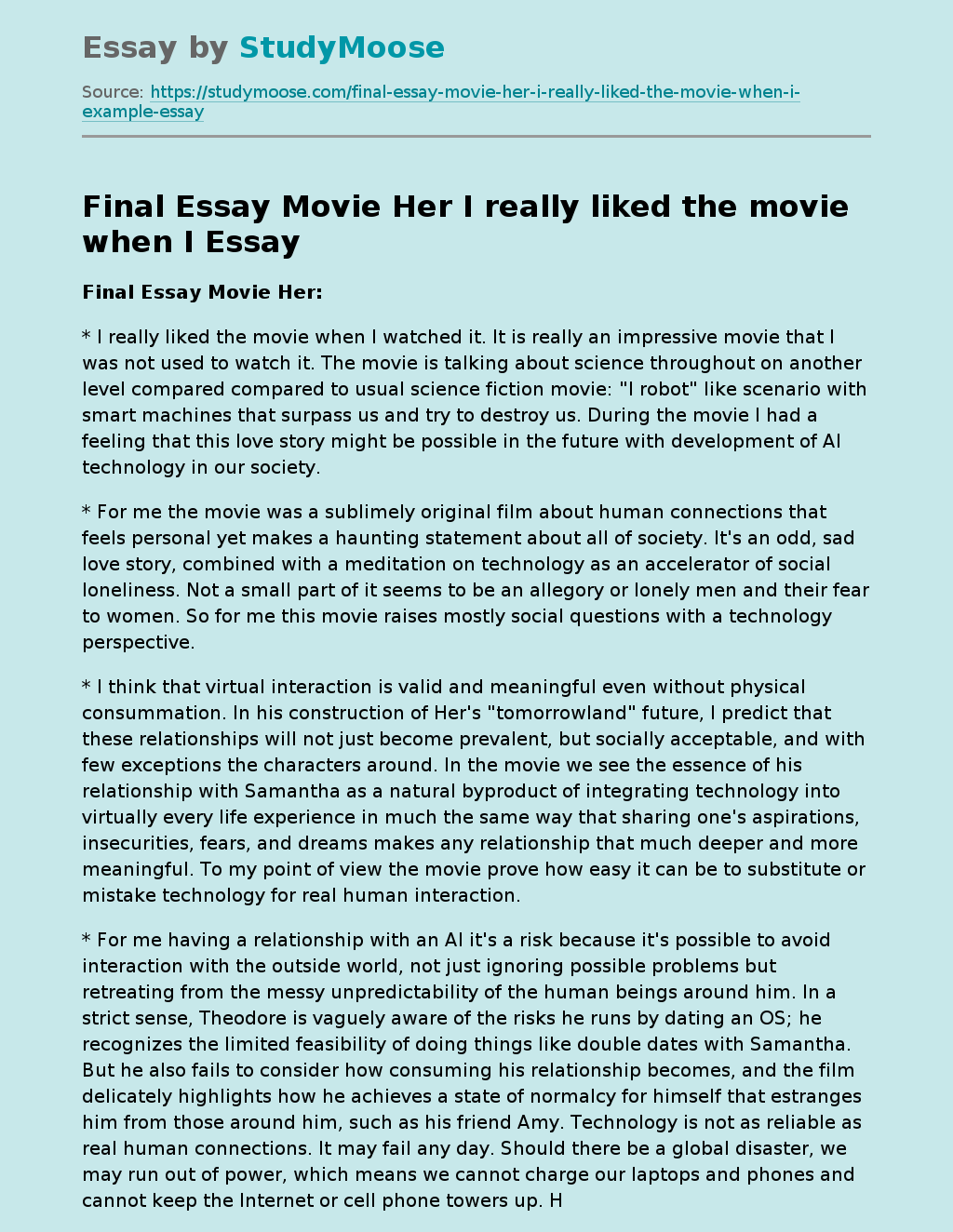