Final Draft Life of Pi CRT Can you think what fear can do with your brain and life? In the contemporary world, we all live in peace and harmony. But the cost of peace has been too high in the past. We have endured brutal wars in the past. The common cause of these wars is fear and foresight. Fear, that something is threatening us or our identity and foresight of expansion of our kingdom or increase in social status. The battle within ourselves starts due to the same root cause: FEAR we are afraid of something is threatening our life or prestige.

Don't use plagiarized sources. Get your custom essay on
“ Final Draft Life of Pi CRT Can you think what fear can ”
Get custom paper
NEW! smart matching with writer

Then comes, FORESIGHT, we feel the need to eliminate fear. But it is always not possible. Sometimes we have to find a way to deal with it. In Yann Martel’s Life of Pi the idea of fear and foresight, leading us to make life-altering decisions, is seen best through the character Piscine Molitor Patel (Pi). Pi is born in Pondicherry, India.

His father runs a zoo; due to the worsening political situation in India, his father decides to move to Canada. They travel on a container ship, but unfortunately, it sinks in the middle of the Pacific. Pi is stranded on a lifeboat with a ferocious Bengal tiger named Richard Parker. In this battle of survival, there are important developments that explain how your biggest fear can come out to be our biggest life saver. It is very important to understand that Fear and foresight help you make life-changing decisions.

Furthermore, they also help you have a better understanding of the play of life. The struggle to survive is the greatest of all; it can blind you making unknowingly cruel or help you get in terms with your fear. Pi who is terribly afraid of the tiger feels the need to overcome Richard Parker and have complete possession of the lifeboat. He realises he had to tame him. It was at that moment that I realised this necessity. It was not a question of him or me, but of him and me. We were literally and figuratively on the same boat. Pi realises that survival with Richard Parker it easier than getting him off from the lifeboat. Pi uses his knowledge about animals and their behaviour to understand how he could establish a territory. Moreover, he depicts how everyone is their lives are forced to make adjustments for the sake of survival. Moreover, it could be understood by the plan he made Plan number seven: keep him alive. When Pi is afraid of the tiger he devises multiple plans to kill Richard Parker. For example, throwing him out of the boat, killing him with injections morphine etc. But when he comes to terms with the tiger we can understand how his biggest fear can be his last ray of hope to survive the catastrophic event. Shows how his sense of empathy, earlier blinded by the race for survival, is regained with the thought that they will survive or die together. It can be said that in the drive for survival one can make extreme decisions.Pi had to survive in the Pacific. Moreover with a Bengal tiger well known to Pi for his ferocity. Fear and hope led Pi to make the decision that he will survive with the tiger rather than competing with him.His level of fear can be understood as he expected to see Richard Parker rising up and coming for me [him]. Several times I [he] had fits of fearful trembling. Pi had food supplies in the lifeboat, but they were near the Richard Parker’s Den. His survival depended on Richard Parker’s seasickness; it increased as the boat went parallel to the waves. He could necessarily depend on seasickness. He had overcome his fear and devise a plan to have safe access to the locker. Moreover, in the story, Richard Parker connects to the idea of conflict between nature and man. Richard Parker can be seen as nature, which terrifies man but still, the man needs to come to an agreement with nature to survive. Hope is the second key player after fear in making a life-changing decision. At first Pi thought to kill the tiger. However, his empathy took over his fear giving him hope. Richard Parker was Pi’s source of hope and determination to survive. As he kept [him] from thinking too much about my [his] family. He pushed me [him] to go on living. He was afraid of Richard Parker but still, it was Richard Parker who helped him be patient and calm. This connects to the idea that even a ray of hope is greater than the sea of darkness. Fear and Hope saved Pi from giving up on himself. As he is able to control his fears he understands the value of a companion in life. Pi’s agreement of mutual understanding and surviving with tiger helped him dominate his fear and regain faith in himself. He describes Richard Parker was [such] a magnetic pole of life, so charismatic in his vitality, that other expression of life found it intolerable. He had begun anthropomorphizing the tiger, that is imagining human characteristics on an animal. He was firm with the idea that he will survive no matter what the ocean has got for him. When Pi anthropomorphises the tiger he develops the understanding of, to what extent one should anthropomorphize animals. He describes the tiger as charismatic, which shows that the tiger was inspiring devotion and hopes in Pi. not only coming to terms with Richard Parker helped him regain faith but also dominated his fear. He states that I [he] looked at Richard Parker. My [his] Panic was gone. My [his] fear was dominated. Survival was at hand. It is the Irony of the story that Richard Parker who was Pi’ greatest fear, also helped him dominate that fear. Hence bringing a strong shift in Pi character, making it stronger with determination and faith. The universal idea of the race for Survival connects as Pi is able to understand that being with the tiger makes facing the ocean’s challenges is easier than battling alone with the tiger and the sea. So in the end, we can conclude that the risky decision that pi took of surviving with a tiger made him understand the role of fear and foresight in life-changing decisions. As he success further in the story he is actually able to train Richard Parker to remain in his territory in the lifeboat. Moreover, he creates a complex relationship with the tiger as he tries to fulfil his needs and in return Richard Parker with his activities sparks the life within Pi. If we compare Pi’s situation with our lives then we can say that Ocean is life; we bob on its surface like the lifeboat. If we are able to overcome our fears and foresight the ocean’s next move, then we can surely find a shore. Hopefully, when we get to the shore, after facing all the challenges, we leave behind all our fears and emerge as a developed personality.

Final Draft Life of Pi CRT Can you think what fear can. (2019, Aug 20). Retrieved from https://studymoose.com/final-draft-life-of-pi-crt-can-you-think-what-fear-can-essay 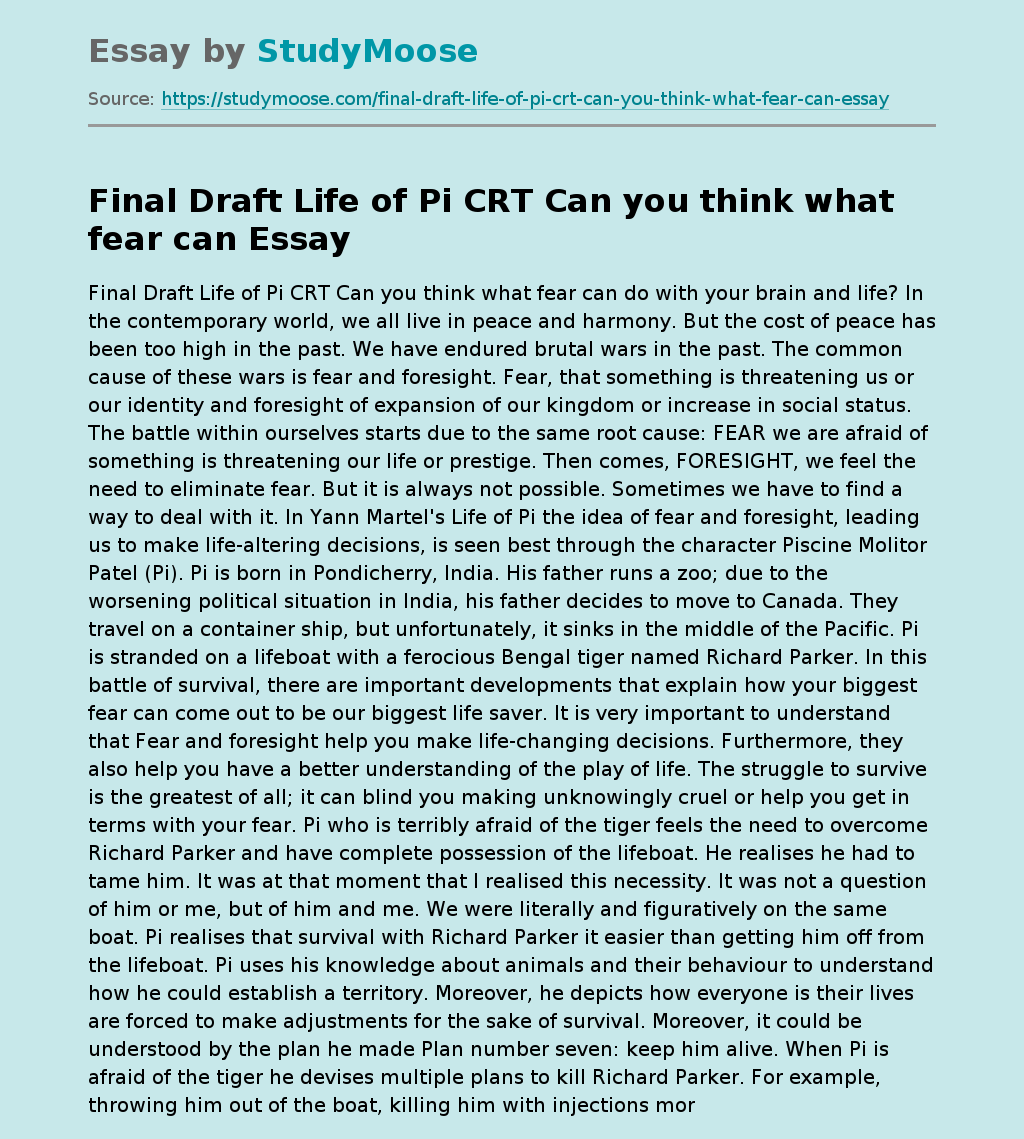