The Film Versions of Macbeth

Shakespeare’s play ‘Macbeth’ was written sometime between 1603 and 1606 at a time when people were fascinated with the idea of the supernatural and witchcraft. People were burned at the stake if they were thought to possess evil powers. The King had even written a book on ‘Demonology’ such was the interest in the subject of evil.

The King reigned supreme and did not bow down to any human power. ‘The Divine Right of Kings’ meant that because God appointed the King, the King was not answerable to the people or parliament.

Don't use plagiarized sources. Get your custom essay on
“ The Film Versions of Macbeth ”
Get custom paper
NEW! smart matching with writer

England was not the advanced, industrial and sophisticated society it is today. Witchcraft practice was punishable by death because it attempted to subvert God’s natural order. Their evil ways were shown to lead only to death. As soon as the witches influence is felt in Macbeth we see a brave and courageous soldier immediately change to an ambitious ruthless and evil man prepared to murder many to achieve what has been shown could be his.

The cost in human terms however is too great.

Shakespeare portrays the destruction in ways supernatural as well as psychological. We are never quite sure how much control of events the witches have and how much Macbeth and his wife are influenced psychologically. Both certainly seem insane the further the drama progresses. The doubt Shakespeare portrays is a reflection of the thinking in his own society. The question of whether witchcraft is ‘real’ is still relevant today. Horror films reflect the popular belief that even in our modern world there may be more to witchcraft than we can understand.

It is significant that Shakespeare opens his drama with the shadowy world of the witches. Their presence then continues to be felt throughout. Even though the first scene is brief, it is disturbing. We listen to the three beings who have met on a desert heath. Thunder and lightening accompany them and produce an evil eerie effect. The first witch asks ‘”when shall we three meet again?” The reply from the second “when the battles lost and won” does not help our understanding as this seem contradictory. We sense that things are not what they seem when they all chant together “Fair is foul and if out is fair”. Fog and filthy air obscure vision and leave us wondering just what exactly we have seen and heart. We cannot even be sure if the witches are male or female because they have beards.

Shakespeare contrasts the first scene with the shadowy world of the witches with the more realistic and physical world of battle and action. When Macbeth is informed of the honour of Thane of Cawdor bestowed on him he becomes unsettled due to the accuracy of the witches prophecy. The power of evil is now established in the play.

Both Polanski’s and Orson Wells’ productions were faithful in many ways to Shakespeare’s original ideas for the drama. They just put different emphasis on things and add ideas of their own. Polanski in Act I Scene I, for example, has his witches bury a noose, and a severed hand clutching a dagger. Blood is poured over both and buried. These visual effects add to our understanding of the death and violence to come. Orson Wells in the same scene puts a more supernatural emphasis in his portrayal when his creatures stir boiling liquid with bare hands. The effigy they pull out is moulded into the shape of Macbeth. His witches are obscured with cloaks, they look exactly the same whereas Polanski characterise him.

He dresses them in rags, one is young, one mature and one horribly disfigured. Both productions favour eerie supernatural type music. It is hard to recognise a tune or an instrument. The high-pitched instruments jangle our senses. Polanski uses more natural sounds though, with sea gulls crying and drums in the background. Where Polanski places his menacing three on a lonely beach Orson Wells has them chanting round a cauldron on a jagged cliff-face rock. In both productions the weather is a signal of the horrors to come. With Orson Wells the 1st scene is played in very thick mist. Polanski begins with a bright red glowing sky, which mists over to a foreboding grey.

I found Act I Scene I of Polanski’s film most effective because the witches seemed more real yet frightening. What they could do seemed ‘possible and believable’. Although Banquo has predictions made for him they do not gain the same psychological hold over him as they do Macbeth. Polanski’s productions show clearly the effect on the mind of the weaker man. There is more emphasis on the psychological effect of the events than the supernatural. Macbeth tries in vain to ensure that he gains and keeps the crown.

In Act I Scene III the witches had addressed Macbeth individually as ‘Thane of Glamis’, ‘Thane of Cawdor’ and King hereafter’. Macbeth dwells on the notion that as part of the prophecy is true why not all of it?

In Act IV Scene I, Polanski is more or less accurately reflecting Shakespeare’s ideas. We see Macbeth as more self-assured. He does not ask the witches for information but demands to know how secure his position is. They call up powerful spirits at his request. He is unafraid, two of the prophecies reassure him. He cannot be defeated by any man born of woman and is secure until Burnham Wood comes to Dunsinane. The third prophecy warns him to be careful of Macduff.

Macbeth is not satisfied until he can be reassured that Banquo’s child will not inherit the throne. Of all the mirrors the deal Banquo holds up to Macbeth his reflection appears in none. The young Fleance appears at the end wearing a crown. Polanski shows us the depths to which Macbeth sinks when he orders all Macduff’s children and his wife to be slain. Even before he arrived at their den Macbeth was described as ‘something evil’ not even a person but ‘something’. We are aware of the depths to which he has dropped. Polanski makes sure we are aware though that Macbeth is possessed by evil. Even before he killed King Duncan he hallucinated. The dagger before his eyes was not real but imaginary. The slaying of the King completed Macbeth is portrayed as in a daze. His wife had to return the two guard’s daggers. Immediately after the murder they both imagine they hear things. Hallucinations and nightmares affect them both. Polanski portrays the psychological cost of ambition on the new King and Queen.

The death of the King was only the beginning. Macbeth slays the guards as if in anger at their supposed deed Macduff’s family, Banquo and anyone else who gets in his way are targets. In Act IV Scene I the supernatural atmosphere in both production is charged with evil. The witches spells are horrible in the detail they predict. Polanski does not include body parts of Jews or Turks as Shakespeare does.

‘Liver of blaspheming Jew’ or ‘Nose of Turk and Tartar’s lips’. They all chant

When Macbeth is getting his information from the witches he seems to be like one of them, not someone out of place. All the prophecies however turn against him.

Polanski’s film spares us none of the violence, bloody murder is everywhere. Macbeth has many spies and lives in fear. His reign is not for a moment a contented and happy one. News of his wife’s suicide does not even move him emotionally. His spirit is possessed of only evil.

Shakespeare, Polanski and Orson Wells all aim to show the triumph eventually of good over evil. The victory however is only until the next time because the witches are not defeated, only the people they have infected. The witches disappear

“Into the air, and what seem’d corporal metled.

As breath into the wind”. (Act I Scene III)

We know evil can appear in many disguises and corrupt the weak minded at anytime. Human nature does not change, people come and go but Shakespeare knew that there are those more prone to influences than others. Duncan was portrayed as a good strong and fair King. Even the Thane of Cawdor met his death honourably. Banquo, although told of greatness die not actively go about trying to gain it. Those seeking undeserved rewards will always carry out evil deeds. The story is as relevant today as it was years ago.

The Film Versions of Macbeth. (2020, Jun 02). Retrieved from https://studymoose.com/film-versions-macbeth-new-essay 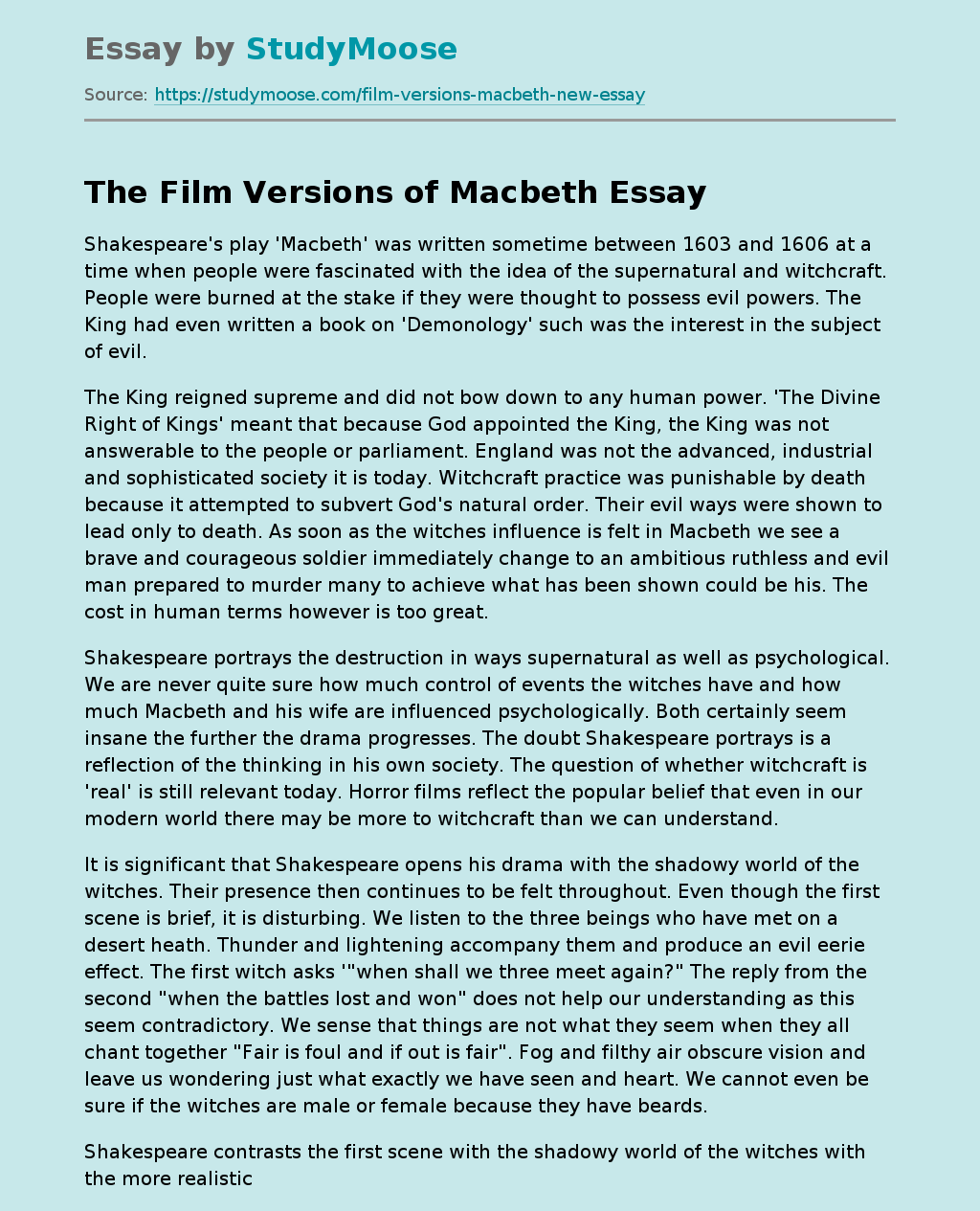