Fernando Amorsolo – Most of his paintings portrayed the Filipino culture, tradition, and customs like Filipino fiestas. He became popular because of his illuminated landscapes and his historical paintings on which you can see the real reflection of a Filipino soul. Some of his major works were:

Don't use plagiarized sources.
Get Your Custom Essay on Filipino Artist Just from $13,9/Page

Ang Kiukok was born in Davao, City on May 1, 1931. He was well known visual artist and is considered one of the National Artists of the Philippines. His parents were half Filipino and Chinese.

He enrolled at the University of Sto. Thomas and met his mentor and lifelong friend Vicente Manansala. He used certain styles in his paintings like cubism, surrealism, and expressionism. He also painted multiple illustration of Christ’s Crucifixion. * Maningning Miclat was born in Beijing, China on April 15, 1972 but she was a Filipino. She was well remembered because of her bamboo Zen paintings and her poetry. She spoke three languages, Filipino, English and Mandarin. She was a fellow of the University of the Philippines’ National Writers Workshop and Siliman National Writers Workshop. Some of her poetry publications and painting were: * Wo De Shi – The first book of poems published in 1987

* Maningning: An Exhibit of Chinese Brush Works – her first solo show of traditional Chinese painting. * Trouble in Paradise – The second book of poetry which also had won the grand prize from the Art Association of the Philippines. * Voice from the Underworld – A 2001 National Book Award Finalist. Luis Eduardo Aute was born in Manila on September 13, 1943. His father was Spanish and his mother was a Filipina. He traveled at the age of 8 years old. He sang and interpreted the song Las Hojas Muertas (The Dead Leaves). He wrote his first poem at the age of 9 when he got influenced the movie entitled On the Waterfront. Vicente Silva Manansala

His most famous piece, The Spoliarium, for which he won top prize at the 1884 Madrid Exposition, is currently in the National Museum in Manila.

His major works in the visual arts include Ina ng Balon, Calvary, Slum Dwellers, Nude with Candle and Flower, Man and Carabao, Angel’s Kiss, Palayok at Kalan, Ancestors, Isda at Mangga, The Resurrection, Fifty-three “Q,” Back drop, Fiesta, Mother and Child, Easter Sunday, and his most acknowledged work Genesis, which served as the basis of curtain design in the Cultural Center of the Philippines Main Theater. His works were exhibited in Washington, New York, London, and Tokyo.

His works include Man and Woman (alternatively known as Beggars), Gadgets and Procession. Critics further described that Legaspi “reconstituted” in his paintings “cubism’s unfeeling, geometric ordering of figures into a social expressionism rendered by interacting forms filled with rhythmic movement. Damian Domingo

He had a photographic memory, was the first Filipino painter who also painted secular subjects. He specialized in taking miniature portrait painting called tipo del pais. These were portraits of Filipinos from higher circles. Reportedly it was also one of those tipo del pais, who yielded his life partner. There are not many works of Domingo preserved. Only two watercolor paintings and three oil -painting. The three paintings are: Nuestra Señora del Rosario, Catedra S. Pedro Roma and La Sagrada Familia 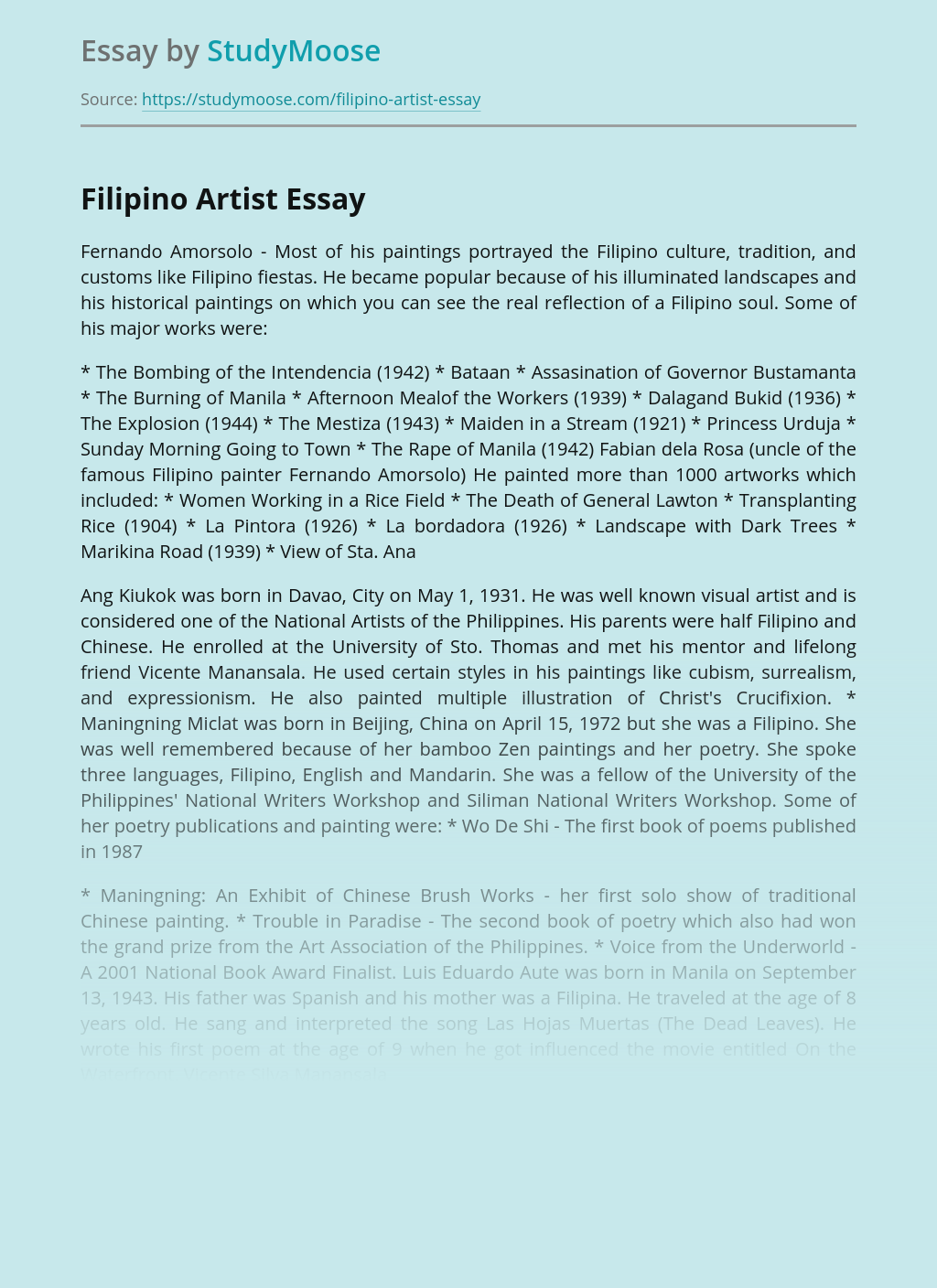 A Particular Friend or Family Member

If I need to choose one of my family members, I may prefer to write about my superhero in my life that is my beloved father. Actually in my mind, I had three persons that always be my superheroes in my life. They are my elder sister that I call ‘Along’, my beloved mother and...

How does the writer create suspense in the Tell Tale Heart?

Marie Wilson, a 34-year-old female client who is gravida 4, para 3, is transferred to the postpartum unit two hours after a prolonged 14-hour labor and forceps delivery of a male infant weighing 9 lb, 2 oz. The placenta was intact upon delivery. The labor and delivery nurse reports that Marie was catheterized for 600...

Nature and Function of Literary Criticism

The word criticism is derived from the Greek word meaning ” judgment”. Hence, criticism was known to be the exercise of judgment on works of literature, or it can be said that criticism is the play of mind to observe the merits and defects on the work of literature. A critic , therefore, is a...

Goods: Physical items produced by business organizations. Operations Management: the management of systems or processes that create goods and/or provide services Process: One or more actions that transform inputs into outputs Services: activities that provide some combination of time, location, form, and psychological value System: a set of interrelated parts that must work together. Technology:...