Acrobats At The Cirque Fernando

Produced in another place and time altogether, renowned Parisian painter, Pierre-Auguste Renoir’s “Acrobats At The Cirque Fernando” (1879) shows two real girls, most probably between twelve and fifteen years of age, taking turns to perform their act at the circus (Mancoff). The facial and bodily expressions of the girls and their onlookers are open to any number of interpretations. One of the young girls is carrying balls around her chest while the other is communicating with the audience as part of her act.

Don't use plagiarized sources. Get your custom essay on
“ Acrobats At The Cirque Fernando ”
Get custom paper
NEW! smart matching with writer

The girl who is communicating with the audience has a questioning, innocent expression on her face.

The one who is carrying balls is possibly waiting for her turn to perform. She, too, is innocent and fresh in appearance as the other. However, she seems to be dwelling on her new experiences of semi-adulthood. Perhaps she is musing on the boys in her life – the young men who admire her very much. The audience depicted in the painting, behind the bodies of the two young girls, appears to consist of men alone after all.

The men appear like judges, in their black coats, giving them the semblance of uniformed officers.

Only one of the men has his face visible through the painting, and the face is hard enough for the girls to display their innocence in all its glory with the assumption that the counterpart of a harsh and doubtful attitude must be softness. Although the girl carrying the balls has her back turned toward the hard faced man, she knows that she too would have to perform.

The woman is seen as the adored and innocent object that performs, even though the man is hard faced, perhaps weary of the work that he performs to fend for his family day after day. The woman is the amuser, the muse, and the object of entertainment to fend for. After all, she is beautiful (Norfleet). The only beautiful facet of the man is that he is strong – in Renoir’s paintings, at least. What is more, the man is always staring at the woman in Renoir’s works. He fondles her whenever he has the chance.

The woman remains faithful to him – this is depicted through the innocence on her face. If she becomes unfaithful she knows that the hard faced man would discontinue supporting her. The French word for ‘thank you’ is merci, which, if used in English, perfectly describes the attitude of the woman in late nineteenth century Paris. Although Paris was one of the first places in the west where women were generally believed to have been liberated, Renoir’s painting reveals that the women were definitely not liberated through promiscuity or debauchery.

Rather, the urban Parisian women in the late nineteenth century seem to have been given permission by their men to be out and about, entertaining them, while remaining faithful to their innocence as well as their marital vows (Norfleet). As the facial expression of the young girl carrying the balls in Renoir’s Acrobats At The Cirque Fernando reveals – women understood their position in Parisian society even as they were aware that men and women are equally dependent on each other. Then again, the painting remains open to numberless sociological interpretations.

As our analysis of Renoir’s painting shows, it is possible to understand the situational context of a painting in any number of ways. Sociologists and historians may be more interested in discovering the history of society in a block of time. If psychoanalysts were to join in, there would be various intricacies of the human mind revealed through artworks. On that note, Figure of a Mother Holding a Child is a very interesting sculpture because there are multiple ways of understanding its import.

On one hand, the sculpture is a perfect depiction of the pain of starvation that the African people have been experiencing for a long time, and that nobody outside of Africa has done anything consequential about – despite the fact that the entire world discusses it. On the other hand, it represents a ritual that the Lulua tribe of the Democratic Republic of Congo had practiced for its own survival (“Figure of a Mother Holding a Child”). The sculpture is that of a skinny, African female with an infant in her arms.

The woman’s head is larger than her body. The bone lines on her neck are particularly telling. Even so, the bone lines on her neck and the wrinkles on her face had actually been created by the artist to show that the Lulua peoples had used scarification to adorn their bodies (“Lulua Tribe: Democratic Republic of Congo;” “Figure of a Mother Holding a Child”). Indeed, it is scarification that adorns the woman carrying the infant. Just the same the viewer is made to feel sorry for the woman and her child because they appear extremely poor.

Acrobats At The Cirque Fernando. (2020, Jun 02). Retrieved from https://studymoose.com/acrobats-cirque-fernando-1031-new-essay 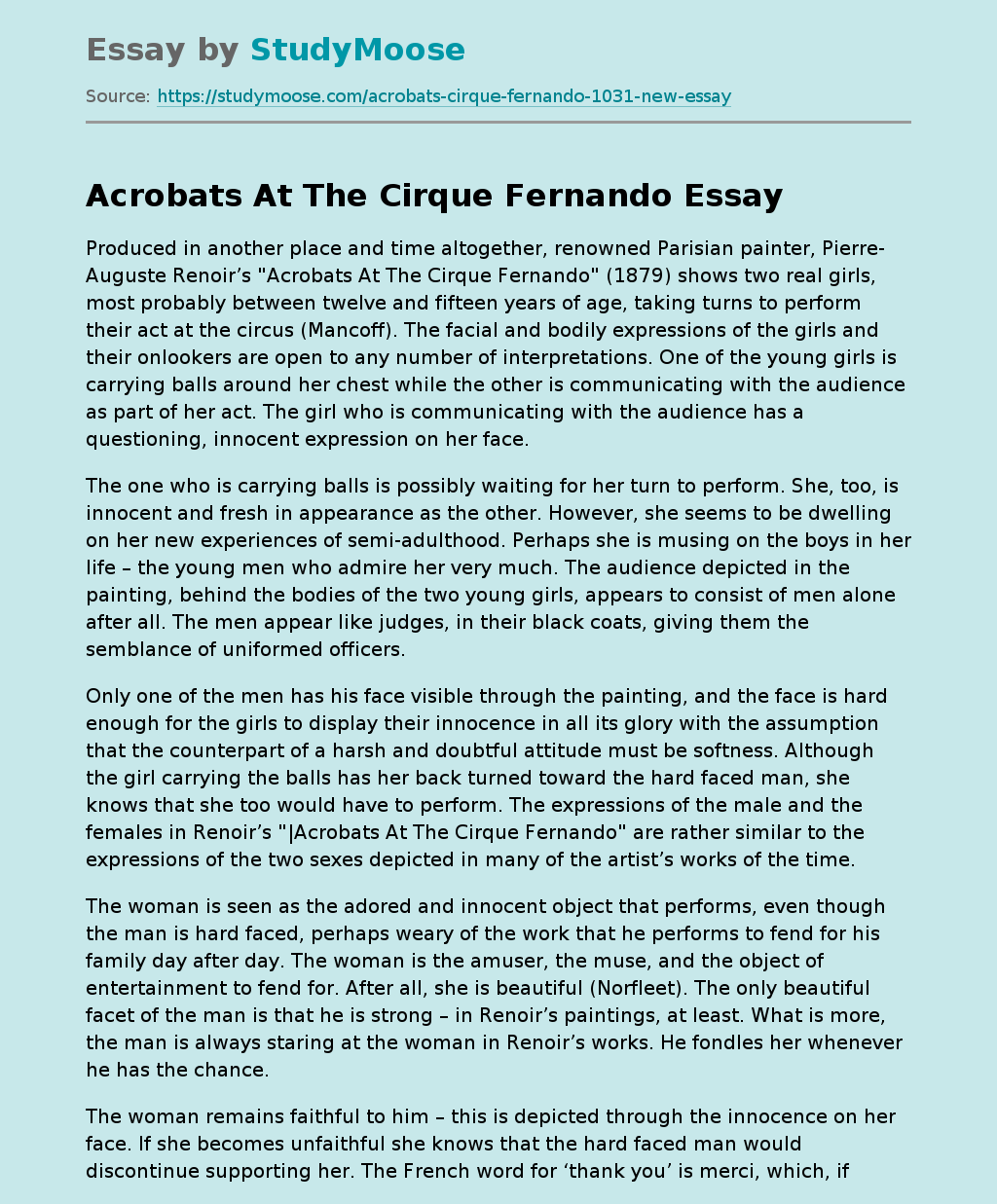