Although the play itself would have made huge strides in the feminist movement at the time the message behind the play brings out a crucial and relevant message to the audience today, and asks bigger questions to young people in a generation that questionably has made very few steps forward in the past few decades. It questions how gendered stereotyping controls our society and how little both sexes care to amend it in an apathetic civilisation.

Blanche as a character although resembling, at times, the potential to be of more substantial character and command the recognition she deserves, is trapped into a bubble of what can be considered feminine and is convinced by her own sub conscience and those around her that the only way to get what she wants is to act within certain stereotypes to find herself any man to provide the stability she craves, Stella alike takes the role in a less exaggerated manner but this in some ways is more powerful as she has the power over Stanley to conduct him as she wishes but herself deems it only acceptable to run back to him every time he calls.

Don't use plagiarized sources. Get your custom essay on
“ Feminist critique on a street car named desire ”
Get custom paper
NEW! smart matching with writer

Self-destruction in its simplest form because society has condemned her to our four walls of femininity.

A Streetcar Named Desire presents a sharp observational critique of the way the institutions and attitudes of postwar America placed restrictions on women’s actions and lives. Williams uses Blanche’s and Stella’s dependence on men to expose and evaluate the treatment of women during the transition from the old to the new South.

Blanche criticizes Stella for staying in a physically abusive relationship with her brooding husband Stanley, thus in turn criticizing Stella for depending on Stanley for emotional support and sexual relief, Stella declares she is ‘not in anything she wants to get out of’ this moment in the play shocks Blanche as she realises that someone she loves and respects so completely could choose this life for herself . However the way Blanche leads her life—contacting Shep Huntleigh for financial support—still demonstrates a complete uncompromising dependency on men. At the end of the play, when Stella makes the conscious

decision to remain with her husband, Stanley, she has chosen to rely on love, and put her faith and reliance in a man instead of her sister. Williams chooses not to present this decision as a mistake or a female falling as it is clear that Blanche’s behavior does not offer nor demonstrate a secure future for Stella or for her newly born child. One of the most prominent communications within the play is that posed by Blanche, as a character we find it incredibly hard to sympathize with her, she appears on the surface manipulative and unhinged masked clumsily by nauseating girlishness .

She comes across in so many ways barely a woman at all with her shrill demands and constant awkward giggling, however her past reveals she is far more of a woman than Stella or Blanche would ever like to believe, her shaded life in Bellereeve leaves trails of fragmented womanhood behind her which later manifests itself in the form of vicious gossip that consequently sparks Blanches downfall. Within herself, Blanche views a quick marriage to Mitch as a manner of absconding destitution.

Blanche’s sexual exuberance is criticized by Stanley and exploited by all the other men in her life excluding Mitch, tarnishing her name, and providing her with a promiscuous reputation. This reputation, by nature of society, brands Blanche an unfit and unattractive marriage prospect, however, as she is destitute, Blanche perceives marriage as her only probability for survival in a bible belt that condemns women be pure in order to be a possibility for wedlock.

When Mitch discards Blanche based on the slander painted by Stanley about her licentious past, Blanche instantaneously turns to another man—the millionaire Shep Huntleigh—in hope of another miraculous rescuing. Because Blanche is blinded by her dependence on men, she loses sight of a realistic concept of saving herself from being pushed down, this view has been embedded in her by humanity condemning her to believe her only discharge will be if a good honest man will wed her, thus somehow erasing the shadows of her past in Bellereeve.

Blanche fails to come to terms with the fact that by putting so much emphasis and reliance in men she no longer controls the outcomes of her future as she puts her fate in the hands of a man, thus ultimately leading to her descent into insanity. One of the most important aspects of feminism is that gender is a social construct and if womanhood is defined purely through the chains of society rather than through natural causes, few societies have enforced it more forcefully and with such vigour as the American South.

The saga that is the southern woman began in the mid 1800’s which saw a white woman of a certain standing put on a pedestal. The southern gentleman and society enforced that a woman be a non-sexual creature, helpless and fragile, this is concentrated and highlighted in Blanche’s behaviour as she believes the only way for her to appear attractive to the opposite sex is to manifest herself as pathetic and incapable. As a Southern lady, Blanche’s narrowly defined social role has kept her from admitting her natural appetites and pursuing them forthrightly.

She has felt obliged to lie to herself and to others. However throughout the play these hidden desires have revealed themselves in private company, for instance her heavy drinking would be seen as impure by southern society and this is evident by both Mitch’s and Stanley’s reaction to this trait. Blanches greatest scandal from belle reeve is that she let her sexual nature control her actions thus ‘spoiling’ her and rendering her a ruined woman. To express one’s sexuality or desires instantaneously reduces a woman to tainted and impure.

Williams has said that he considers Blanche’s character liberated, she has lived such an autonomous life in such a repressive time she could almost be considered heroic were she not so ashamed of her fierce former independence. In the play she seeks stability after the tragedy of her life in Belle reeve – ergo her attraction to Mitch – his incessant and ceaseless tedium results in Blanche being capable of fulfilling her central hunger in this time of her life, to find a good husband.

She regularly discourages masculine behaviour in Mitch, rendering him the submissive co-part of the relationship, Blanche subconsciously maculates herself by doing this. Both sisters have felt the full force of marrying for love (Stella through the physical abuse omitted by Stanley and Blanche through the affair of her bi-sexual late husband) it could be argued that Allan’s sexual ambiguity led Stella to choose an overtly heterosexual working class man.

Some criticise Williams writing of Stella as she fails to release herself from the grasp of her abusive husband, expressing that Williams presents Stella (and blanche) as weak and incompetent however this criticism is unjust as Williams would have been writing before any form of feminist movement arose, meaning that Williams himself was writing purely from observation of his Southern America. Williams himself as a homosexual

male experienced the same struggles as these women being considered a second class citizen or an ‘other’ The ending of the play, finishes controversially for feminists addressing the issue of rape, however Williams does not present Blanche as victim, although the tone of sympathy primarily lies with the women of the play Blanche manifests herself as a worthy opponent, she has allured Stanley with provocative comments and engaged in verbal battles with him throughout the play.

She has not proved a weak adversary at any moment and at the climax of the play smashes a bottle and threatens to ‘’twist it into his face’’. Stanley does not rape Blanche in order to re-instate his power in the house rather than as a battle for position of alpha-male, as from the beginning of the play Blanche has threatened this position, she has drunk his alcohol, manipulated his wife and this pinnacle marks the end battle of this ongoing power-struggle.

Stanley is not belittling Blanche or women in general by raping her rather he feels it is his last resort in order to have victory thus proving he sees her as a genuine intimidation. Stanley says ‘we’ve had this date with each other from the beginning’ showing that she was a direct threat from the beginning and the fact that it could imply that the act was pre-meditated is the only indication of deliberate cold- blooded cruelty on Stanley’s behalf.

Williams challenges the traditional view of marriage as posed by cultural standing, assuming that marriage is the end of the story, and that marriage is synonymous with a lifetime of joy, erasing all pain from behind that moment. Williams sees marriage as the start of a life for a man, far from the bliss that is advertised. Mitch and Stanley represent realistic portraits of men who will constantly cram their women into gendered stereotypes and Stella and Blanche will always oblige to protect their own stature and (in the case of Stella) to shelter their children. 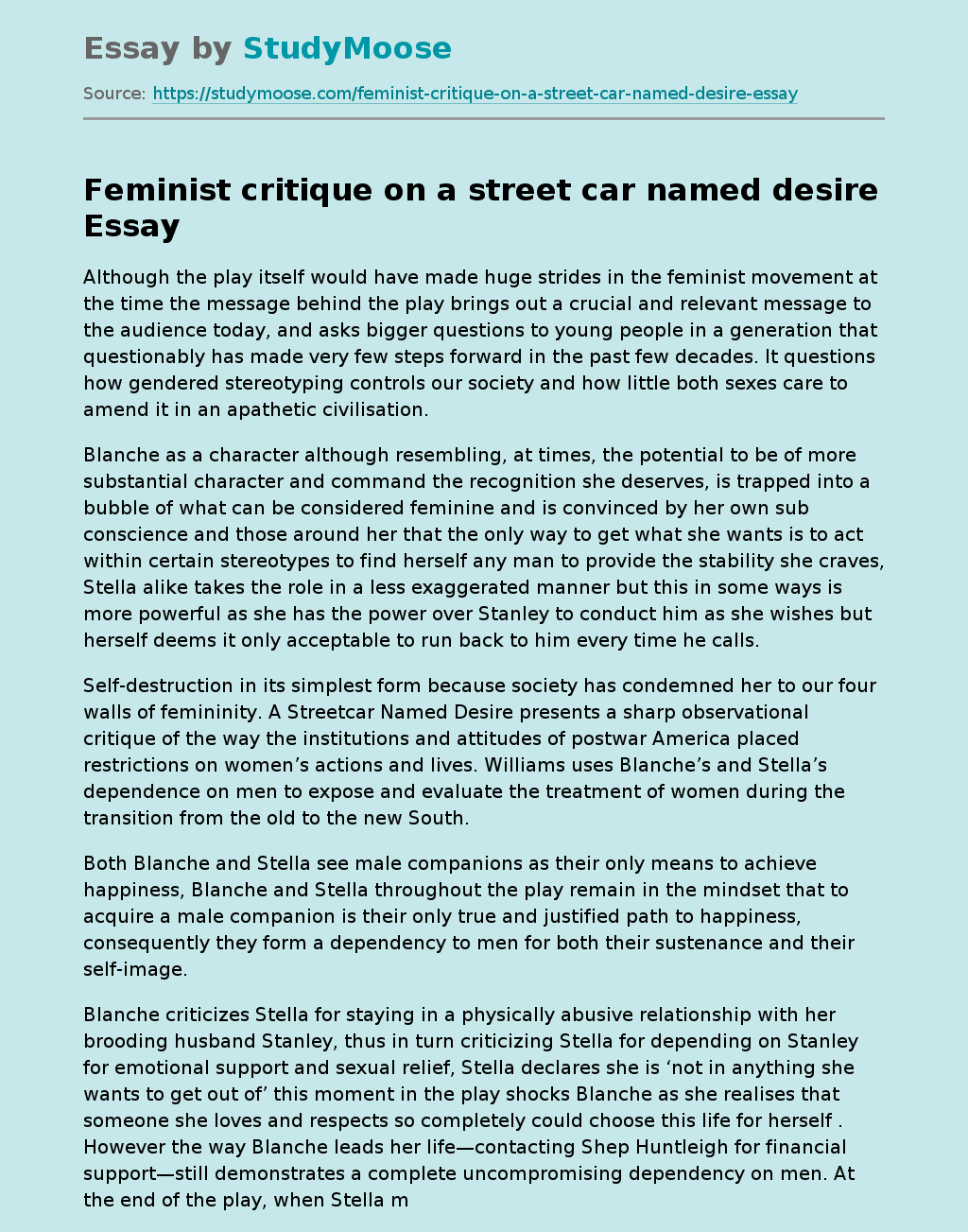