Analysis on Fast Food Culture and Its Double-side Effects to the world from the Development of American Fast Food ?. Introduction Fast food is becoming more and more popular around the world these years. It is estimated that there are more than 100 branches of McDonald’s and KFC only in Beijing. The appearances of the fast-food arouse a new thing named “fast-food culture”, and also the debate about this culture by people. ?. Brief history of American fast food 1. McDonald’s two brothers named Richard and Maurice McDonald left their home in New Hampshire and seeking jobs in southern California.

At first they tried opening a theater but it was not a success. Then they caught on to the new craze of eating at drive-in restaurants and they opened one in 1939, in Pasadena, California, calling it “McDonald’s Famous Hamburgers”. (http://hi. baidu. com/) 2. The Emergences and Expansion of KFC KFC, shorted from Kentucky Fried Chicken, is a chain of fast food restaurants based in Louisville, Kentucky.

KFC primarily sells chicken in form of pieces, wraps, salads , sandwiches and so on. The popularity and novelty of KFC made it famous and popular throughout the world. The fast food like KFC is also developed in the whole world.

(http://www. kfc. com. cn) ?. The Development of Fast Food Industry Most people think that it is the McDonald brothers who start the fast-food craze in America, but in reality, it is the White Castle hamburger chain that actually started fast food history in America. J. Walter Anderson opened the first White Castle in 1916 in Wichita, Kansas, Richard and Maurice McDonald, the two brothers who created the first McDonald’s restaurant in 1948 in San Bernardino, California. By 1953, the brothers had decided to franchise their idea, and two franchisees opened in Downey, California and Phoenix, Arizona.

Today, fast food chains have spread all around the world, and have spread American culture right along with them. There are many more popular chains, like Carl’s Jr. , Arby’s, Domino’s and Dairy Queen, indicating that fast food isn’t always about hamburgers. ?. Globalization In 2006, the global fast food market grew by 4. 8% (Linda Stradley, 2008) Globalization is that the world is moving away from self-contained national economies towards an interdependent, integrated global economic system. It refers to the shift toward a more integrated and interdependent world economy.

Fast food is becoming more and more popular around the world these years. It is estimated that there are more than 100 branches of McDonald’s and KFC only in Beijing. But the fast food sell in China which crude material is always manufactures in other countries. So if something changed in China, it is sure affects other countries. Fast food is already spread into the world, it is sure increase the knowledge between countries. Conclusion Throughout the world, American fast-food chains have become symbols of Western economic development, opening everywhere from Bulgaria to Western Samoa.and attracted a large number of consumers and the economic benefits.

Fast food industry is decided by the development of social progress and economic development, it improves people’s living standards and way of life. The fast food industry is an important industry of living environment and investment environment, and also an important component of the consumer leisure, tourism, consumption, shopping and spending. The competition in the fast food market is very intensely, but should be focused on one aspect: that is, to eat fast food with nutrition, health.

High-calorie fast food as a high-fat food is not suitable for eating. Fast food does have double-sided effects on the development of economy and people’s life. Though fast food still have so many shortages of this or that, This kind of food culture is true developed to be part of people’s life, no matter the criticism of fast food is true or not, fast food is still to be a trend in the future. 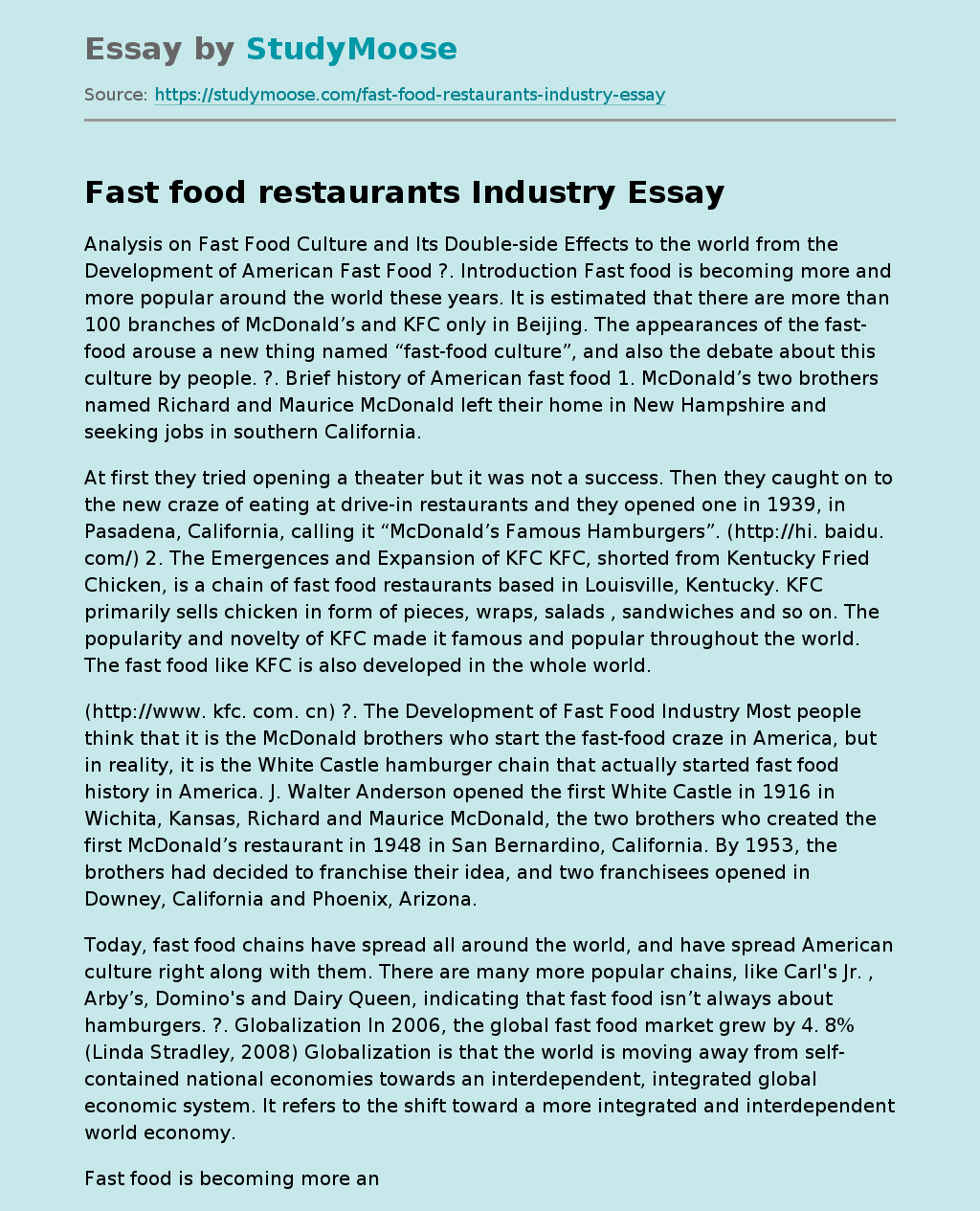