In “Fast Food Nation: The Dark Side of the All-American Meal” (2002), Eric Schlosser argues that “… Fast food is solely responsible for every social problem now haunting the United States”(9). Schlosser analyzes this conflict by setting side by side the positive and negative affects and outcomes of the industry growing so rapidly. He reports evidence and eye-opening facts about the multinational corporation in order to prove the dangers and aftermath of the increased success in fast food.

Schlosser conveys that “too much fast food can cause serious risks”(65) due to the fact that “Hundreds of people buy fast food everyday”(10) as a convenience, and are unaware of the harm they are causing themselves.

He elucidates and sighs at the fact that the business is made to attract young, innocent children when they are ignorant to the process and makings of their cravings. Schlosser presumably addresses the United States (as in “manifestation of American popular culture. ”) in his novel because he openly discusses the need for Americans to become in touch with the reality of Fast food.

Since 1965, the amount of fast food joints opening have increased nationally, along with the safety issues concerning the consumption and preparation of their cooking. The preparation process is not what Americans make it out to be. For example, many bacteria and infections have been found in the meat of the everyday burger, “According to the Centers for Disease Control and Prevention (CDC), more than a quarter of the American population suffers a bout of food poisoning each year.

Coli is one of the most popular infections to be recognized throughout the nation. With his in-depth research, he provides the stories of the average everyday American who has been infected or passed away with such a horrid disease. Furthermore, Ingrid Abboud, from nittygriddy. com states, “Studies revealed 50% of fountain drink dispensers were found to be contaminated with fecal bacteria”. Schlosser also provides the facts of Salmonella appearing in the cooking of the infamous greasy meals, “A tiny uncooked particle of hamburger meat can contain enough of this pathogen to kill you. (201). Schlosser’s verification of insecurity in the daily meals American’s consume can tug of the heart strings of the readers. Fast food and its eye opening facts is a reminder to the audience that not only are they hurting themselves, but that the effects are also affecting the family members and the ones who care most about the individual. What’s in the meat is not only a major concern, but also a major safety issue. To brainwash an innocent child with the advertisement of a new Fast Food Franchise is beyond cruel and diminishing to their health.

As most American’s know, Ronald McDonald is a well-known character from the legendary McDonald’s company. With their golden arches and tasty treats, McDonalds has become the most identifiable company in the world, not only by children, but adults as well, “The Golden Arches are one more widely recognized than the Christian Cross. ”(5). In the mind of a child, the next cool thing is always what they strive to obtain, and the ones who purchase the item is always the adult or parent. On health-foodguide. om, they declare as to what the consequences are of children who have mal eating habits, “When you take the time to see what children are actually eating, it becomes very apparent why so many children are dealing with obesity. ” Furthermore, Schlosser ponders on the reality of the kids’ attraction to so much fast food, “Children would be the new restaurant chain’s target customers. ”(41). Many parents go to extremes to please their children; including buying them anything they want to eat. When McDonald’s applies pathos in their equation, they add in the new “it” toy and captivate the attention of a child.

Furthermore, the more the children want the toy, the more food they purchase daily, monthly, and yearly. The health issues following so much consumption of these treats can lead to diabetes, heart disease, and obesity. Facing the valid facts and proving ethos, the fast food nation would go to any extremes, including damaging the health of multiple innocent children, just to get an extra dollar in their pockets. With the opening of so many new fast food restaurants, new hazardous and treacherous jobs are created and must be filled with employees willing to go the extra mile to please a costumer.

As society continues to increase in size, the job opportunities are minute but the initiation of a new restaurant is not. To maintain the high-demand of meat to produce the burgers Americans love and adore, the meat packing industry hires hundreds of human beings to reach their goals. As mentioned in the novel by Schlosser, “the meat packing industry has become one of the most dangerous jobs around. ”(169). The data Schlosser provides when he enters the slaughter house and the names he proves to know add credibility to his statements and apply it applies Ethos. In addition, in the article A Look Inside Slaughter Houses on www. llcreatures. org, Myrtle strongly opinionates her point as to what really occurs on the inside, “If slaughterhouses had glass windows, everyone in the world would be a vegetarian. ” As any individual knows, being drenched in the blood of anything, let alone an animal, can be defective to your health. So how far do the fast food industries need to go just to please a costumer with yummy tasting food and gain their money? The unhealthy working conditions and unsanitary environment is appealing and tents to open the eyes of Americans and prove that the industry works their employees in unsafe work places for their benefit only.

Although the fast food nation has many negatives sides to their industry, positive outcomes have been also been achieved through the opening of their restaurants. For example, the more chains and franchises that these entrepreneur‘s open, the more job opportunities open for the everyday American that is trying to get by. “It currently opens about five new restaurants every day, and at least four of them are overseas. ”(229), as confirmed by Schlosser throughout his novel. Not only does it open up more positions for people to work, the fast food joints have also dramatically increased the money entered into our economy.

Schlosser proclaims that the industry has been a major strength in increasing the economic problems that our country has suffered through in past times, “The fast food chains have become totems of Western economic development. ”(229). There are various points as to how the franchise’s have helped the United States, but the amount of negative outcomes over comes the positive. After doing true research on what type of food individuals are stuffing their faces with, the American society can never be to sure of any of the tasty cuisine.

As mentioned all throughout “Fast Food Nation: The Dark Side of the All-American Meal”(2002), by Eric Schlosser, their have been more than plenty negative results to the consumption of the fatty burger patties and golden greasy fries. The industry is a multi-millionaire company that will take any risk to obtain any capital they can reach. Moreover, the franchises are willing to put any bodies’ health in risk. Not only that, but they are deliberate when it comes to brainwashing innocent people just to get Americans to put one more bite of a burger in their mouths.

The fast food nation might be successful and in a way helpful to America, but in the end, they are causing nothing but issues and problems to the individuals who purchase their everyday intriguing meals. Works Cited Abboud, Ingrid. “Scary Facts about Fast Food. ” , 2010. Gray, Thomas. “Fast Food Effects on Child Obesity. , 2011. Schlosser, Eric. “Fast Food Nation: The Dark Side to the All-American Meal. ” New York, 2002. Quinn, Myrtle. “An Inside Look At Slaughter Houses. ” &lt; http://www. all- creatures. org/articles/ar-aninsidelook. html&gt;, 2009. 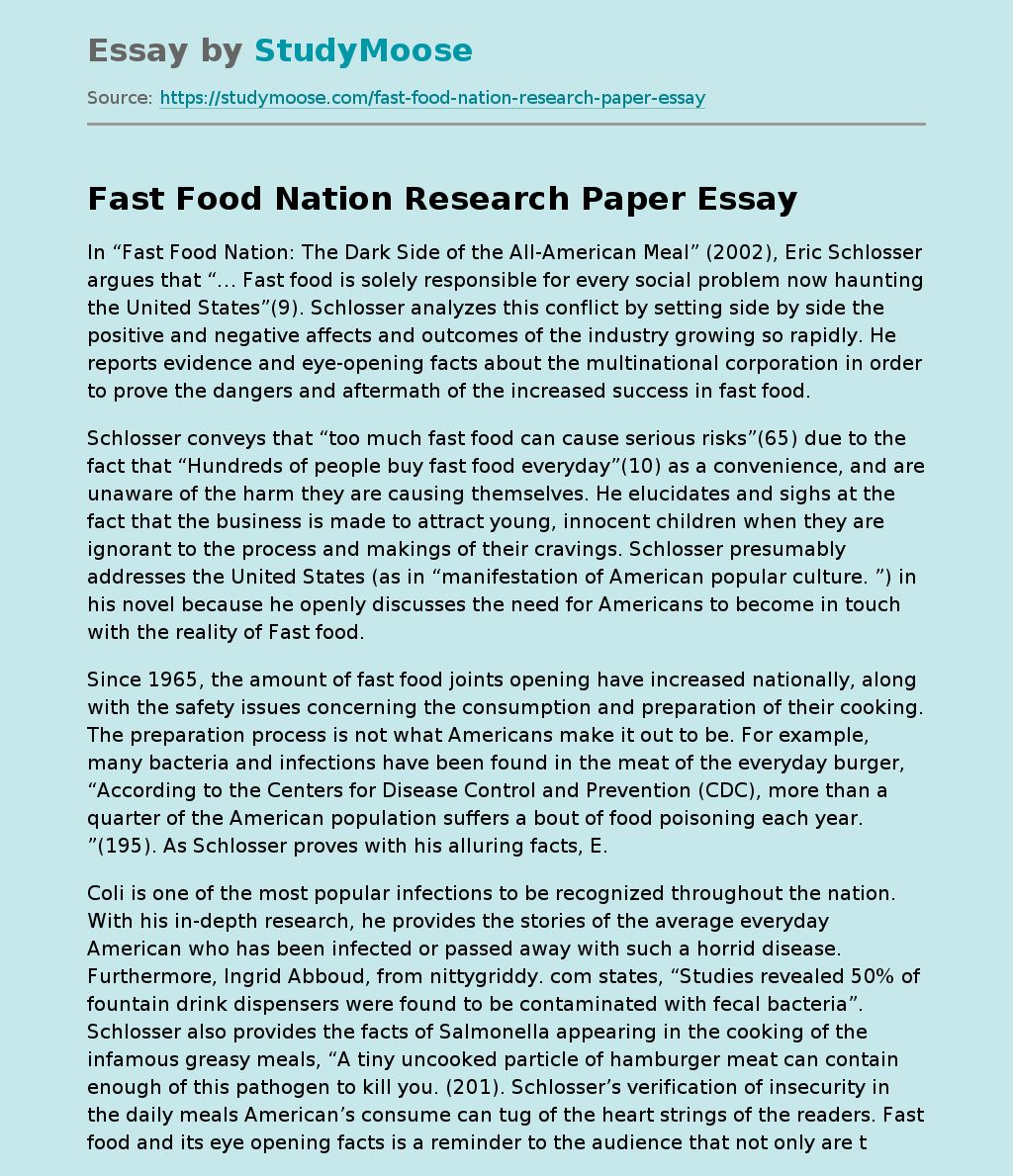