How do the Falstaff scenes relate to the main plot?

Dramatically Falstaff’s world of idleness, dishonesty, self-indulgence and irresponsibility is in direct contrast to the honour and nobility that Prince Hal finally achieves. By integrating him so completely into the interrogation, Shakespeare ensures that the audience is continually provided with an alternative perspective to the serious themes. Even when Falstaff claims to be a hero ‘I gave him this wound in his thigh’, the audience cannot dislike him because it has been taught to identify with his irrepressible humour and will to live.

Don't use plagiarized sources. Get your custom essay on
“ How do the Falstaff scenes relate to the main plot? ”
Get custom paper
NEW! smart matching with writer

Shakespeare created Falstaff mainly as a source of comedy that the average Englishman at the time could relate to. Falstaff balances out the seriousness of the history play with his comedy for example in Act III Scene 3 at the Boar’s Head Tavern before the war. Here Falstaff has been pick pocketed as a joke, and he blames the hostess for this. Even when he knew his facts were wrong, he persists in his lies, ‘will not pocket up wrong’, and forgives the hostess when she has done nothing wrong at all.

Although he does not know about the planned trick, he seems to be sharing it with the audience: ‘a Plague upon it when thieves cannot be true to one another’. When the travellers arrive he is more talk than action, urging the gang to ‘cut the villains throats’ and afterwards cursing Hal and Poins for their apparent cowardice. This shows that during the play, Falstaff is a coward and also a liar.

The next scene involving Falstaff is the height of the comic sub-plot. It deals with the robbery two scenes prior. Hal and Poins show up Falstaff’s lies when he talks about being robbed by a gang of ‘a hundred upon four of us’.

Hal eggs on Falstaff until his lies become inconsistent. Hal asks Falstaff how he could have known that his attackers were wearing ‘Kendal green’ even if it was so dark that ‘thou could not see thy hand’. Another theme that Shakespeare creates in his sub-plot is the topic of the Father-Son relationship. King Henry and Falstaff are contrasted together as father figures; Falstaff acts as a role model for Hal, exactly the opposite to Prince Henry. In the first scene that we see this duo together, we can tell that they are very close friends. The friendship is like a father son relationship without the anger of the father.

They joke and make fun of each other with out the other taking any offence. But despite all this, Hal knows that to have any credit as a future King he must throw off ‘this loose behaviour’ so that people will admire him. The major scene when Falstaff and Hal show their father-son relationship is Act II Scene 4, where they play-act the meeting between Hal and King Henry. Mock interview demonstrates two ways of looking at Falstaff, one bad and one good, and these both expressed in language that is highly literary and rhetorical. Falstaff begins by parodying a style of verse- ‘King Cambyses vein’-which was common in Elizabethan theatre.

You can see that the characteristics of his speech when he turns to prose, the similes, repetitions, rhetorical questions, verbal antithesis and alliterations. These produce an exaggerated, pompous effect suitable for his parody role as the King. Falstaff reference to ‘a dagger of lath’ identifies him with the figure of Vice in the morality plays whose function was to tempt men to sin. Prince Hal’s depiction of Falstaff as ‘that reverend vice, that grey iniquity, that father ruffian, that vanity in years’ refers to him as a character in the morality plays.

This whole play-act show how much influence Falstaff has over Hal as a role model and a father figure. Shakespeare creates Falstaff for another reason as well, he comments on the major theme of the play, honour. He indirectly and directly speaks of honour throughout the play. Falstaff’s recurring complaint that ‘Art you not a coward? ‘ showing that when Hal and Poins were not taking part in the robbery. This echoes the issues of loyalty, honour and responsibility that are raised by the main plot. Similarly in Act IV Scene 2, Falstaff is in a soliloquy, where he is amusing the crowd by describing his army.

We learn about Falstaff’s ‘charge of foot’ and how he has dishonourable come about them. Falstaff talks about how he ha ‘used the King’s press damnably’ to force rich soldiers into the army so that they can pay their way out of it. This shows you the honour of Falstaff and the honour of the rich soldiers who paid their way out of fighting. Again this comments on the main theme. Shakespeare does this so that the public can see what a person Falstaff is and that they can compare his army to Hal’s that was ‘shining’ as Vernon described it a few scenes prior.

In the next scene that Falstaff comments on honour his views are made totally clear. Falstaff indulges in a soliloquy to show what honour really is. Falstaff’s prosaic reflections on the subject comes at an appropriate time in the play, just before the high ideals embodied in the word will be put to the test in a bloody conflict. Yea but how if honour prick me off when I come on, How then? Can honour set to a leg? No. Or an arm? No. Or take away the grief of a wound? No. Honour hath no skill in surgery, then? No. What is honour? A word. What is in that word honour?

What is that word honour? Air. This very long quote shows the exact feelings of Falstaff on the theme of honour. Shakespeare also uses Falstaff and Hotspur to balance out the honour of Hal. Hotspur is the ‘king of honour’ and Falstaff is the exact opposite. This gives the audience to extremes of the subject. Then they can see that the Prince is the mid-way between the two horrors. In Act V Scene 4 Hal fights valiantly with Hotspur who falls and dies. Falstaff also flights with Douglas and he too falls to the ground, but he is only pretending to be dead..

When Falstaff rises from his sham death, in marked contrast with the real death of Hotspur. Once again the comic mode has a critical edge that compels the audience to refer to themes of the main plot, eg. Honour. Falstaff’s interpretation of valour is cynical and self-interested. As he carries off the body of Hotspur, his ‘trophy’, his thoughts are all on rewards and respectability. As Hal agrees to go with Falstaff’s lie that he and Hotspur fought for ‘one hour by the Shrewsbury clock’ this shows that Hal was not honour-crazy like Hotspur, but he just wanted the battle over with.

Many people would say that Falstaff is a fool in his character. I would strongly disagree with that as he shows great amounts of virtuosity with his words and moralises the words around the main themes of the play (such as honour being a’ mere scutcheon’ and nothing but ‘air’). Falstaff believes that whoever takes honour seriously; honour will take him to death. ‘Rare words! Brave world! ‘ he comments, after Hal summons them all to battle. Shakespeare creates a relationship between the two plots, with the comic sub-plot often parodying the subject of the main plot.

Thus when the rebels begin their conspiracy against the king, which is the subject of the main plot, the comic sub-plot also starts it conspiracy against Falstaff. Overall, Falstaff contributes greatly to the play, not only as a comedian, but also a wise Fool, commenting on the major themes of the play, both directly and indirectly. Falstaff, creates humour with his puns and alliterations and never lets the real world play too much of a part in him. The Falstaff world revolves around ‘sag’ and being rewarded for his ‘heroism’ in the battle where he fought Hotspur for ‘a long hour by Shrewsbury clock’.

How do the Falstaff scenes relate to the main plot?. (2020, Jun 02). Retrieved from https://studymoose.com/falstaff-scenes-relate-main-plot-2507-new-essay 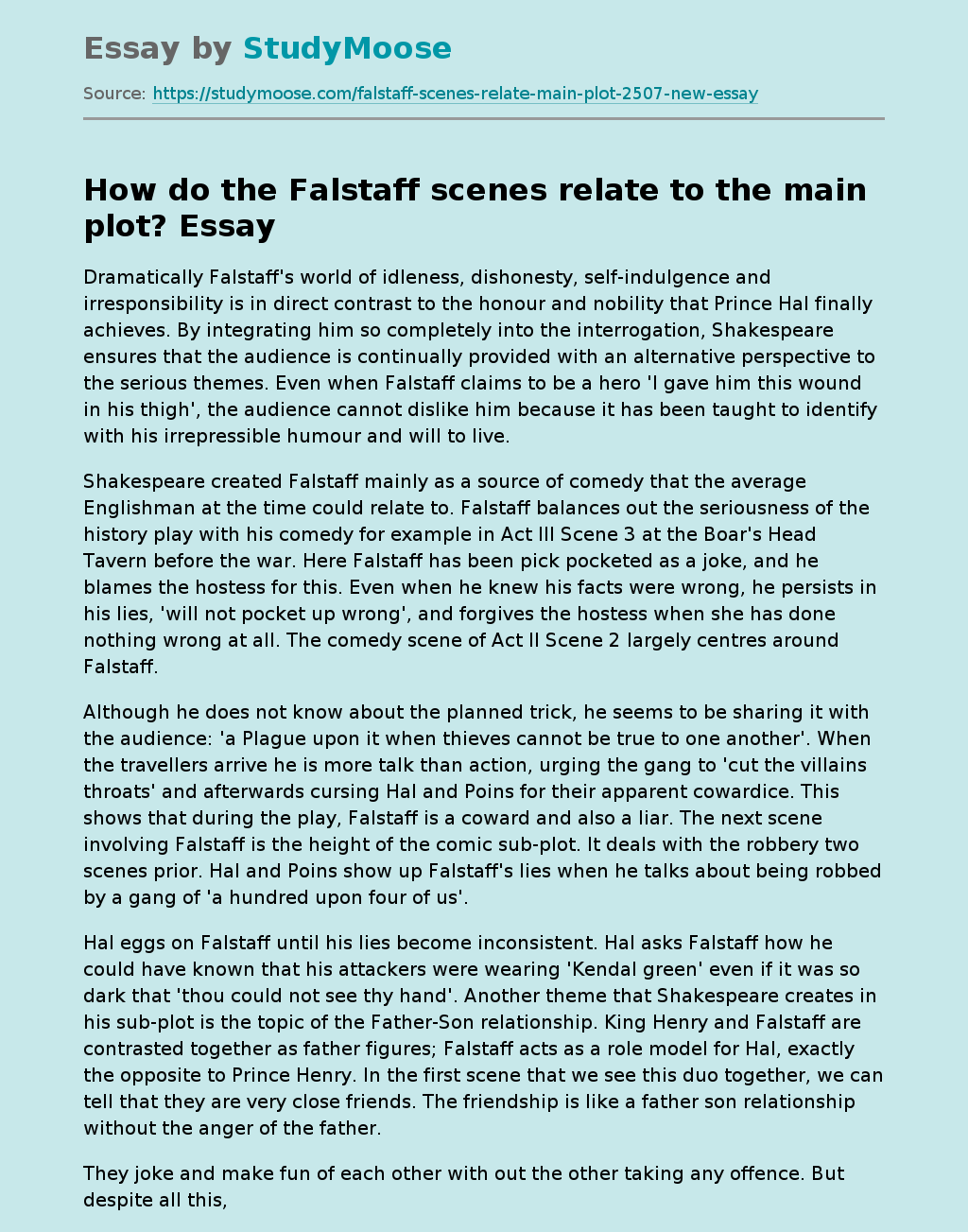