If facts by themselves never prove or disprove anything, what else is involved in the proof of a statement?

Throughout our lives we enter a journey in order to gain knowledge and, hence discover what justified true belief is. The word ‘fact’ is often defined as a piece of information presented as having objective reality. 1 Furthermore, the word ‘fact’ often connotes that there is a substantial amount of truth, and some would even go as far as saying that facts are almost synonymous with truths. If facts by themselves never prove or disprove a statement, then we would be forced to engage and utilize other ways of knowing in order to determine the degree of truth and validity present within a given statement.

Don't use plagiarized sources. Get your custom essay on
“ If facts by themselves never prove or disprove anything, what else is involved in the proof of a statement? ”
Get custom paper
NEW! smart matching with writer

However, without the ability to incorporate facts, which are one of the more objective and concrete ways of knowing, which ways of knowing could we utilize and still form valid and seamless proofs? The elements of which a proof of a statement is comprised of vary generally from one area of knowledge to another.

Therefore, we would consider the usage of different ways of knowing, differing from one area of knowledge to another. For example, mathematicians have strived to derive mathematical models that stimulate the world around us.

The theorems that we now use in our everyday lives, once were only conjectures that needed to be proven. Mathematicians developed a plethora of proofs that now solidify and enable us to incorporate and learn from these theorems with an air of security. In mathematics, the use of inductive proofs is plentiful. From a specific example, we develop a conjecture, and then prove this conjecture within set limits and the aide of axioms, definitions, and other theorems, while using other examples in order to prove for all situations that the conjecture is true.

However, would we not consider axioms, definitions, and theorems as facts? Even the resulting step that we arrived at with the use of inductive logic could be considered as a fact, so how could we successfully prove a conjecture without facts? There would be nowhere to start from as the very foundation of mathematics has come to be proven by pieces of information that we now consider as facts, as well as axioms, which we deem to be facts, without any proof.

We could argue that we could come to the conclusion that the conjecture has been proven by the use of pure logic and inductive reasoning, although how could we rest assured that the conjecture indeed has been proven true? Although mathematics is an area of knowledge that is considered as much more objective in comparison to the other areas of knowledge, we could resort to the use of intuition. For example, in my recent mathematics exam, I had to solve an inequality and show that it was true for a range of x-values.

However, when solving an inequality that involves absolute value, one must consider very carefully for which values the inequality would be greater than or equal to zero. As it is very difficult for me to visualize concepts, I merely resorted to using my intuition and considering if the answer I had arrived at felt ‘right’. The natural sciences are very similar to mathematics as an area of knowledge in that it is perceived to be one of the lesser subjective areas of knowledge in comparison to say perhaps the arts.

However, we use deductive proofs more frequently in the natural sciences than in mathematics. For example, in biology, we know that temperature, substrate concentration, and pH are factors that would have an effect upon the rate of reaction in regards to how it affects the enzymes that control that specific pathway. We then would carry out an experiment to using a specific enzyme, such as amylase, and see if a factor, such as temperature, would indeed affect the rate of reaction.

However, the use of deductive logic could involve a number of fallacies or faulty logic that at first appears to be sound, although the possibility of arriving at a proof that is entirely foolproof and reliable, is greatly reduced. In contrast, the arts are seen as probably the most subjective of all the areas of knowledge. However, we of course introduce standards while critiquing a piece of work. For literature, we often have expectations in regards to the effective use of literary elements and how overall themes, ideas, and situations are communicated, whether it is implicitly or explicitly.

But how do we determine whether this piece of work is successful or ‘good’? We resort to the use of emotions, intuition, and the voices of authorities. Frequently we believe that a piece of art is ‘good’ if it provokes thought or triggers a certain feeling within us. For example, in English A1 we studied the fictional novel, The Lovely Bones, and I felt that it was a good book because I felt that it gave insight to a different perspective of a rape victim, that as society as whole is unfamiliar with.

I felt like I could relate with the novel’s protagonist, Susie, and although it was emotional to read, it brought a sense of serenity and optimism. I found the novel to be interesting, and I felt like it was a novel that I could reread voluntarily, which I could not say for myself. However, would Candide, a short story written by Voltaire, be an unsuccessful or ‘bad’ piece of work since I did not feel interested or inspired by it?

Not necessarily, because Candide, has been considered as one of the most influential and controversial works of literature. Many authorities believe that Candide is a ‘good’ example of literature as it has met their standards and been so significant upon history and the realm of the arts. However, emotion and intuition are not usually seen as favorable ways of knowing as they are highly subjective and what one may consider true, another could argue that they do not feel the same way, therefore the statement is not necessarily true.

This of course could be argued. Bhagavad Gita once said, “[Emotion] has the advantage of being open to all, the weak and the lowly, the illiterate and the scholar. It is seen to be as efficacious as any other method and is sometimes said to be stronger than the others, since it is its one fruition, while other methods are means to some other ends. “2 Authority, as a way of knowing, is considered to be a more unbiased way, although authorities could also argue against each other.

Examiners that mark exams frequently argue whether or not a student is deserving of all the marks and what constitutes as deserving, so this would cause several issues to arise. Furthermore, whom we consider as authorities also is subjective to a certain extent, which would undermine the validity and element of truth involved in the proof of a statement. If facts could neither prove nor disprove a statement, we would resort to other ways of knowing, such as emotion, intuition, inductive and deductive logic, as well as conferring with authorities.

However, we often regard facts as an objective and reliable way of knowing, especially in comparison to emotion and intuition. We could still develop proofs of statements without utilizing or incorporating facts, although creating loophole free proofs would be more tiresome and exerting. There would be an increased need to account for and consider the extent of validity with these different methods of knowledge, although as society our great desire to know and obtain knowledge will prevail and enable us to create proofs by more innovative means.

If facts by themselves never prove or disprove anything, what else is involved in the proof of a statement?. (2020, Jun 02). Retrieved from https://studymoose.com/facts-never-prove-disprove-anything-else-involved-proof-statement-new-essay 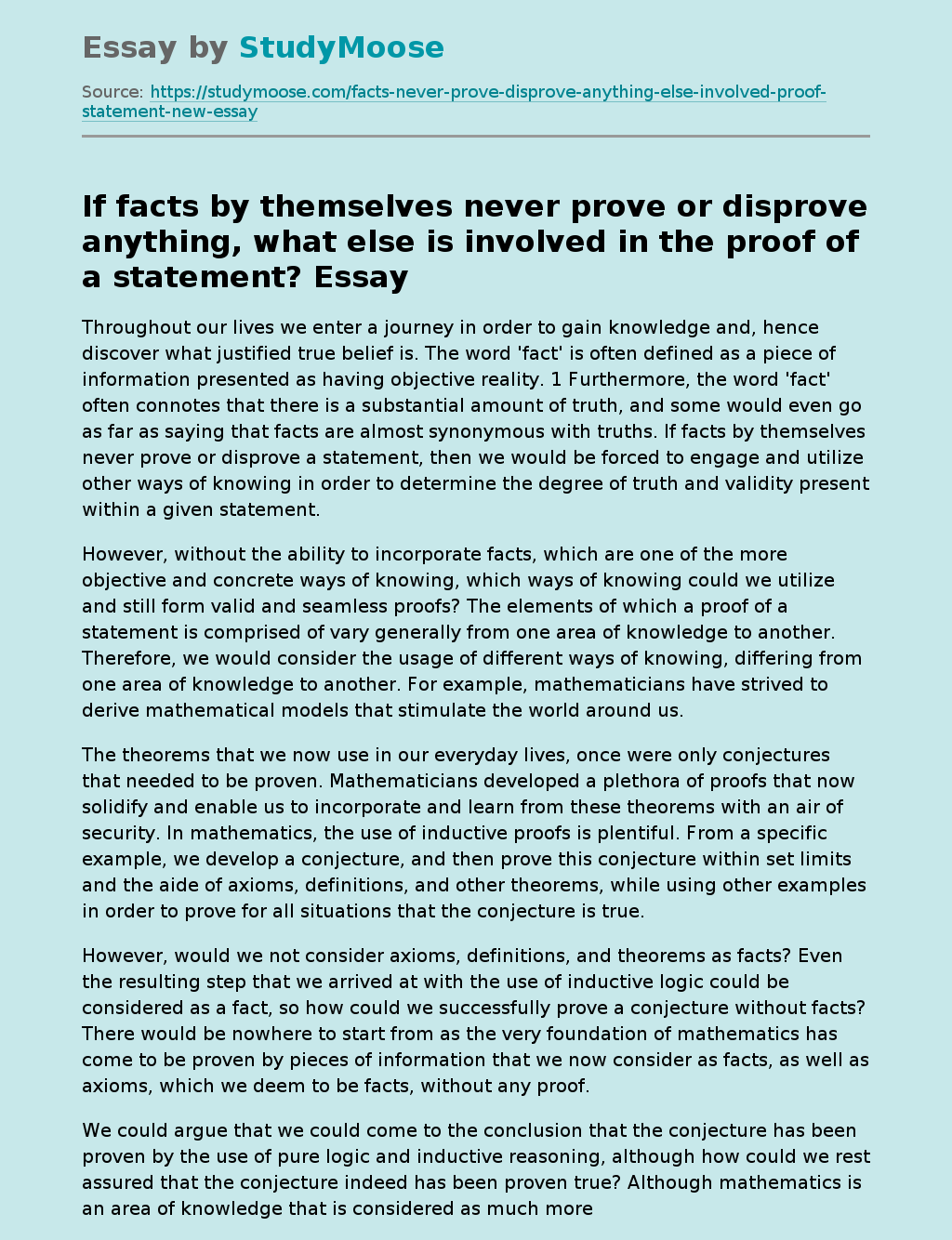