Tamil is a Dravidian language spoken predominantly by Tamil people of South India and North-east Sri Lanka. It has official status in the Indian states of Tamil Nadu, Puducherry and Andaman and Nicobar Islands.

Tamil is also a national language of Sri Lanka and an official language of Singapore It is legalized as one of the languages of medium of education in Malaysia along with English, Malay and Mandarin. It is also chiefly spoken in the states ofKerala, Karnataka, Andhra Pradesh and Andaman and Nicobar Islands as one of the secondary languages.

It is one of the 22 scheduled languages of India and was the first Indian language to be declared a classical language by the Government of India in 2004.

Tamil is also spoken by significant minorities in Malaysia, Mauritius, Canada, South Africa, Fiji, Germany, Philippines, United States, Netherlands, Mauritius, Indonesia, and Reunion as well as emigrant communities around the world. Tamil is one of the longest surviving classical languages in the world.

It has been described as “the only language of contemporary India which is recognizably continuous with a classical past.” and having “one of the richest literatures in the world”. Tamil literature has existed for over 2000 years.

The earliest epigraphic records found on rock edicts and hero stones date from around the 5th century BC. The earliest period of Tamil literature, Sangam literature, is dated from ca. 300 BC – AD 300. Tamil language inscriptions written c. 1st century BC and 2nd century AD have been discovered in Egypt, Sri Lanka and Thailand.

The two earliest manuscripts from India, to be acknowledged and registered by UNESCO Memory of the World register in 1997 and 2005 were in Tamil. More than 55% of the epigraphical inscriptions (about 55,000) found by the Archaeological Survey of India are in the Tamil language. According to a 2001 survey, there were 1,863 newspapers published in Tamil, of which 353 were dailies. It has the oldest extant literature amongst other Dravidian languages. The variety and quality of classical Tamil literature has led to its being described as “one of the great classical traditions and literatures of the world” Facts about language:

Tamil is the oldest language in the world. It is the mother of all Indo European languages including Sanskrit. Recent archaeological (Adhichanalloor and Indian ocean) evidence shows that the language is related to sumerian and that Tamil was spoken in South India more than 5000 years ago. Tamil legend says speaks of a lost continent, “Kumari Kandam” which is believed to be submerged under Indian Ocean.

Recent excavations in Indian Ocean seem to support this legend. Kumari Kandam is a legendary sunken kingdom sometimes compared with Lemuria. In Tamil tradition, Kumari Kandam is referred to as the Land of Purity, a sophisticated kingdom of higher learning, located south of Kanyakumari Sangam literature describes about Kumari Kandam, which lay to the south and east of the Tamil country, which had been lost to the sea in two successive inundations. The two inundations are said to mark the division between the three sangam periods. Geological features described in the literature include two main rivers of Kumari Kandam as the Pagruliyaru and the Kumari.

It is also believed to have had numerous great cities with great monuments and the foremost among those cities were the two first and second cities of Madurai. Both the first and the second Tamil literary Sangam Eras, the Muthal Sangam and the Idaii Sangam, were said to have been held in those two respective cities of Madurai. Dravidian Traditions give the two Sangamperiods antiquities ranging in tens of thousands of years with a timeline of about 10,000 B.C to the second. Both the Sangam Eras were supposed to have been terminated by deluges which submerged Tamil lands. The Epics Shilappadikaram and Manimekhalai describe the submerged city of Puhar. The timeline will make a better understanding:

Knowledge and Status of Tamil Language at present:

Tolkappiyam, the oldest known literary work in Tamil, has been dated variously between second century BC and fifth century AD. Tamil was declared a classical language of India by the Government of India in 2004 and was the first Indian language to have been accorded the status. The Tamil script consists of 12 vowels, 18 consonants and one special character, the aytam. The vowels and consonants combine to form 216 compound characters, making a total of 247 characters.

Facts about tamil language. (2016, May 13). Retrieved from https://studymoose.com/facts-about-tamil-language-essay 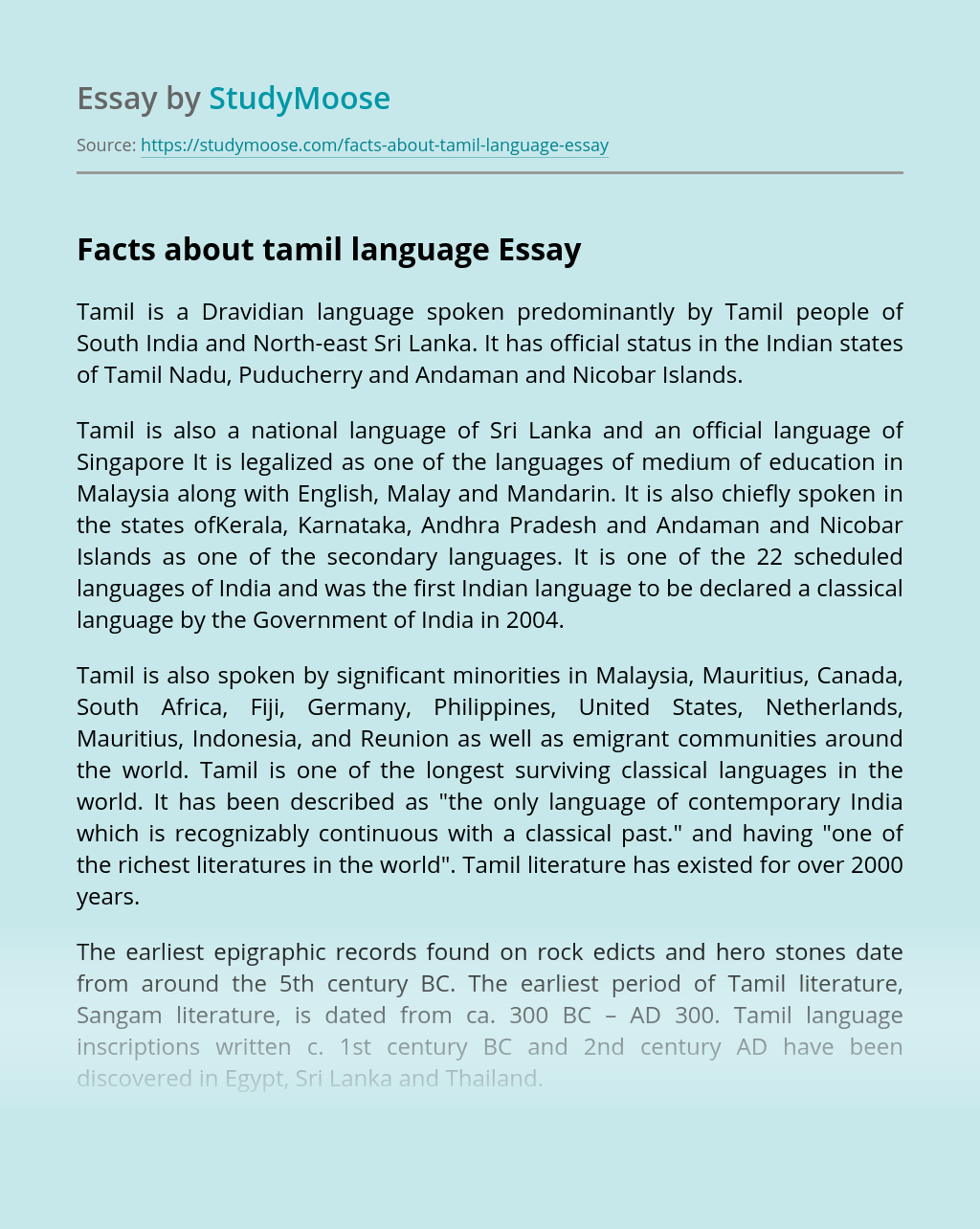 1. Do a SWOT analysis of YouTube in India. Strengths: The site is user-friendly and uploading videos is simple. They enable fans content and users with whom they can connect. Weaknesses: Copyrighted material is allowed to be uploaded to the site. While there are some Indian languages on the site, the main language is still...

Abstract Is English Killing other languages? As we went on to know and find out what people think about question, we learned and observed people’s different opinion, rather we should term it as conflicting. Some say we cannot blame the English to be a language killer, world is changing and those who couldn’t survive die...

Get Essay
Language Problem in India

India is one the greatest or well you can also say one of the weirdest countries in the world…. it’s a country u could never have thought would come over 50 years living together…. Our country on its way had to deal with many great problems… and the one I am going to speak about...

Dogri is a mother tongue of Jammu people but it is a matter of concern that people have learned it through experience and not as a second language from school or other institutions, because the way Dogras are centered on Hindi and English to their children, Dogri will soon be dying out. Seeing the tendency...

Similar to carvings in wood, character is molded by indents- through pain and suffrage. This notion is evident in Aravind Adiga’s novel, The White Tiger, in which Balram Halwaii seeks to create his own destiny. Having no role models within his family to help to guide him along his fated path, Balram quickly becomes determined...

About India: History and Culture

The history of India begins with evidence of human activity of Homo sapiens as long as 75,000 years ago, or with earlier hominids including Homo erectusfrom about 500,000 years ago. The Indus Valley Civilisation, which spread and flourished in the northwestern part of the Indian subcontinent from c. 3300 to 1300 BCE in present-day Pakistan...

The best known case of this is the Chipko movement in the Himalayas (Hegde, 1998; Weber, 1987). The villagers rallied together to save their forests by hugging the trees from the axe of the contractors who were issued licenses without the consent of the local people. Much earlier to this movement, though similar in its...

The 1947 segment of Bengal is fundamentally unique in its result than the sudden calamitous division of Punjab on account of a few authentic, social and political reasons. Bangla writing, that depends on the segment’s encounters, is in this way additionally shifted and diverse in its reactions to 1947 not just as an occasion, but...