Factors that contributed to the rise and development of sociology

Don't use plagiarized sources. Get your custom essay on
“ Factors that contributed to the rise and development of sociology ”
Get custom paper
NEW! smart matching with writer

The turmoil of the French Revolution spread throughout Europe and other nations. Kornblum (2008) suggests that the political upheavals were associated with tremendous social changes. The political revolutions demolished the old social order and monarchies.

Why Social Theorists Found Interest in the French Revolution

There was social chaos and disorder in societies that were resulted in by the political revolutions especially in the French society.

Social theorists were attracted by these societal changes that had been a result of the political unrests hence giving rise to the discipline of sociology.

Auguste Comte (1798-1857) who is credited for being the founding father of sociology was attracted by the social changes that had arose in reaction to the political revolutions. The French philosopher Comte attributed his focus of study to the French society so as to restore social order. This marked the beginning of sociology. Therefore, it is wise to claim that the European political upheavals resulted in social changes which attracted a number of social theorists such as Comte thereby leading to the rise of the scientific study of society.

The industrial transformations gave in the establishment of factories and industries resulting in the creation of employment and social changes such as urbanization in the urban settlements. According to Kornblum (2008), individuals flocked from rural to urban settlements for employment that had been brought by the capitalist system. This resulted in overpopulation, poor sanitation, poor health and high death rates due to poor working conditions in the urban settlements where industrialization had emerged upon. The lower classes that served as laborers for the capitalists were oppressed and exploited by the capitalists in the sense that both adults and children worked for long hours and were given low wages. Classical sociologists such as Karl Marx (1818-1883) were attracted to the study of society due to the unfair system of the capitalist economy that had been brought by the industrial revolution in Europe.

American sociologists began studying social changes that had been resulted by the industrial revolution such as racism, theft and interaction among societal individuals. Charles Horton Cooley is one of the American sociologists who began the study of the society due to social changes brought by industrialization. Industrialization in the United States of America contributed to the rise of sociology in the United States of America.

The scientific study of the society rose also due to the growth of science in Europe (Ritzer, 2008). Sociology emerged during a period of time when natural sciences had great honor and prestige in the European society. Natural scientists were given respect and honor in the society because they were believed to be problem-solvers in the world through the use of natural sciences such as chemistry.

The growth and superiority of the natural sciences stimulated social scientists also to develop a social science that would solve societal problems that had been brought by the industrial and political revolutions. The social scientists eagerness of creating a science of society resulted the beginning of sociology which is the scientific study of the society. Auguste Comte was influenced by the growth and prestige of the natural sciences because Comte coined the term sociology which relates to the scientific study of the society. Comte alson developed positivism which was based on the notion that natural scientific methodology of objective observation and experiments should also be applied when studying the society. In this regard, the growth and prestigious position of the natural sciences resulted in the emergence of sociology. Ritzer (2008) also suggests that the enlightenment era also led to the rise of sociology. Ritzer (2008) adds that the enlightenment era was a period of remarkable intellectual development and change.

Role of Socialism and Feminism

This gave the rise of sociology because a few sociologists used doctrines of socialism in studying the society and they believed that a socialist society would mark the end of social problems. Karl Marx was inspired by socialism in developing his sociological theories because he advocated change from the capitalist to the communist society model. However, socialism also developed sociological theory because most of the sociologists, particularly functionalists were conservative and criticized the socialist doctrines.

Thus sociology developed due to socialism because sociology hardly consisted solely the scientific study of the society but it also comprised criticisms of some theories, specifically socialism. As a result, socialism contributed to the rise and development of sociology as highlighted above. The rise of feminism had an impact in sociology because feminist ideas developed sociological theory (Ritzer, 2008). Feminism is based on the idea that women are superior as well and are equal to men in the society. Feminism rose during the liberation era of modern Western History. Feminist sociologists include Harriet Martineau (1802-1876) who wrote a textbook entitled ‘Society in America’. Male sociologists such as Comte responded conservatively to the feminist ideas.

Influence of Religion on Sociology

According to Ritzer (2008), religion also led to the rise of sociology. Ritzer (2008) citing Hinkle and Hinkle (1905) says that many early sociologists came from different religious backgrounds and were actively involved. They brought to sociology the same religious objectives they had in their personal lives. For instance, Durkheim, Karl Marx and Max Weber wrote on religion in their personal perspectives.

Factors that contributed to the rise and development of sociology. (2016, Apr 13). Retrieved from http://studymoose.com/factors-that-contributed-to-the-rise-and-development-of-sociology-essay 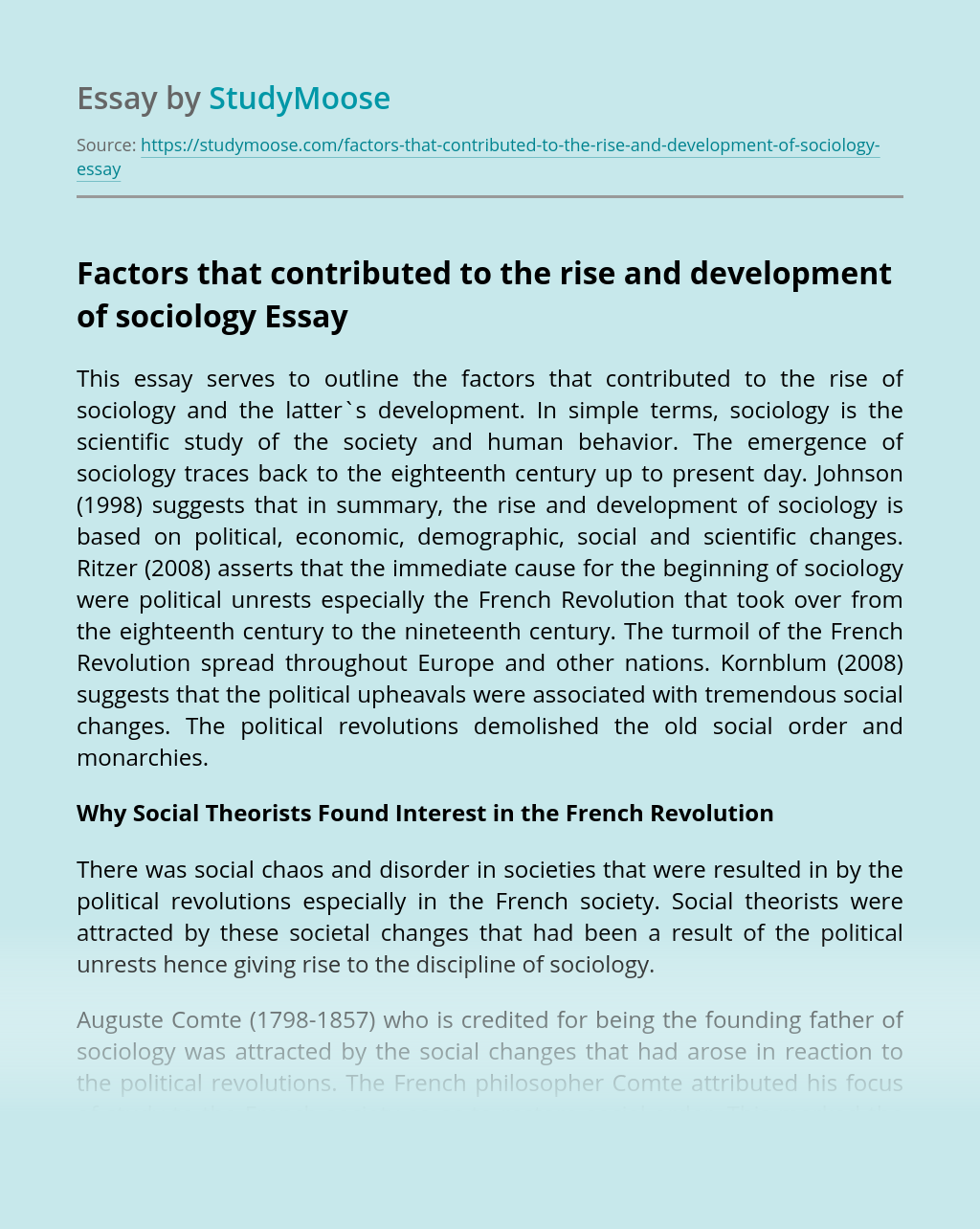