Facial recognition technology refers to a computer driven application that automatically identifies an individual from his or her digital image by a comparison of particular facial features in a facial database and in a live image (Vacca, 2007: 95).  The technology creates a template of people’s facial configurations, such as the lengths of their noses, and the angles of their jaws.  It thereby functions like the other biometric technologies (e.g. iris scanning) that use biological features for the purposes of recognition.

Don't use plagiarized sources. Get your custom essay on
“ Face Recognition Technology ”
Get custom paper
NEW! smart matching with writer

According to Visionics, a manufacturer of face recognition technology, the technology is capable of finding human faces “anywhere in the field of view and at any distance, and it can continuously track them and crop them out of the scene, matching the face against a watch list (Kautzer, 2002).”

It is natural brain technology that allows humans to recognize fellow human beings.

According to Bruce & Young (1986) there are “face recognition units” in the brains of human beings (361).  Face recognition involves matching “the products of structural encoding,” that is, facial features that are spotted by the eye with “previously stored structural codes (Bruce & Young: 361).”  Vacca writes that there are three areas of the face that are “primary targets” in face recognition because they do not typically change (95).

These parts of the face include upper sections of a person’s eye sockets, the part of the face surrounding one’s cheekbones, and the sides of the human mouth.  Regardless of whether the human brain also considers these parts of the face most crucial to facial recognition, Vacca explains three different techniques used in man-made face recognition technology, namely, eigenface systems, eigenfeature systems, and thermal imaging.  Eigenface image systems capture facial images and change them to “light and dark areas (Vacca: 95).”

In eigenfeature systems, certain features of the face, for example, the eyes and the mouth, are picked out and distances are measured between these features.  Thermal imaging systems, on the other hand, take thermal images of the human face, focusing on the pattern of blood vessels (Vacca).

Even though iris scanning and other kinds of biometric technologies are known to be far more accurate than face recognition technology, it is believed that the latter would be more widely accepted because it is least intrusive.  This technology does not require users to push, click, or insert anything into the system, despite the fact that it takes many experts to create eigenface, eigenfeature or thermal imaging systems.  Moreover, companies using the face recognition technology do not require the installation of anything except a new software application.

The cameras already in place as well as pictures of their employees on file are enough for companies that use this technology.  Hence, face recognition technology is cheaper for organizations than iris scanning, for instance, which requires reading setups.  According to Frances Zelazney, who works as the director of corporate communication at Visionics – a leading developer of biometrics – yet another advantage of facial recognition technology as compared to other biometric technologies is that “facial recognition provides for inherent human backup because we naturally recognize one another…

If the system goes down, someone can pull out an ID with a picture as backup, something you can’t do with fingerprint devices (Rutherford, 2001).”

Unsurprisingly, facial recognition technology is known as the fastest growing biometric technology in our day.  Law enforcement agencies and the military have been successfully using the technology for many years without the public being aware of it.  In the year 1988, the Los Angeles County Sheriff’s Department (Lakewood Division) began using composite sketches of suspects, as well as video images, in order to conduct searches on a database of digital facial shots.

The department also has a photo database of sex offenders and plans to find suspects on this database.  Then there is the Gang Reporting Evaluation Tracking system that can be searched with the use of photos of suspects in order for law enforcement to circumvent false identification cards as well as information that has been presented by gang members (Jarvis).

Other applications of face recognition technology in the area of criminal investigation include the Integrated Law Enforcement Face-Identification System which incorporates a unique three dimensional composite technology to identify angled-view face shots more easily.  The system is meant to be very helpful in the correct identification of uncooperative suspects in addition to subjects that have been caught from a distance using video surveillance cameras.

Furthermore, Britain is known to use at least two hundred thousand video cameras for surveillance.  Many of these cameras are being installed with the facial recognition technology today.  Typically these systems use computers to monitor cameras that are looking for recognized criminals.  As soon as the system is seen to identify a known criminal, the police are called (Jarvis).

There are numerous United States embassies around the world that are already using the face recognition technology to keep criminals from entering the country.  The Israel-Palestine border control is similarly using the technology to reduce crime across the border (Jarvis).

IQ Biometrix, established in 2001, was a company providing help to thousands of law enforcement agencies around the world with the FACES ™, a groundbreaking software tool allowing users to create and recreate billions of face shots, as well as encode, catalogue and transmit them.  The technology incorporated a facial composite tool that the FBI and the CIA also used.  The United States Department of Defense, the U.S. Navy, and various local as well as state police agencies had similarly opted for this groundbreaking system of facial recognition (“IQ Biometrix,” 2004).

Given the importance of putting a name to a face in law enforcement, whether it is to solve crimes, protect the public, or to ensure security in jails, face recognition technology is proving itself to be of tremendous value.  Sheriff Everett Rice with the Pinellas County Sheriff’s Office in Florida employs the Viisage face recognition technology to “positively identify and verify individuals (“Facial Recognition in Action,” 2007).”  Some of these individuals have been recently arrested while others are about to be released.  The face recognition technology is also of use with people that visit the courthouse.  So far, application of the technology has been successful, and users of the technology believe that it would have a greater impact on crime control in the years to come (“Facial Recognition in Action”).  The following is a detailed account of the case being considered:

Over time, the Pinellas County Sheriff’s Office, like other law enforcement agencies,

found itself faced with cumbersome booking, release and criminal investigation processes.  A prominent problem was a lack of timely information, which often allowed suspects to get away with providing false identification, hampering law enforcement or sidetracking investigations.  However the sheriff’s office found facial recognition to be an invaluable tool in providing quick and accurate identity information.  Facial recognition technology has allowed the sheriff’s office to quickly access important identity information and retrieve records, thus allowing officers to correctly identify even uncooperative suspects and to conduct more efficient investigations.

In 2000, the Pinellas County Sheriff’s Office received a grant from the Office of Community Oriented Policing Services (COPS) at the U.S. Department of Justice.  The goal of the funding was to demonstrate the use of facial recognition technology for Florida law enforcement.

Under the leadership of Lt. James Main acting as project director, the sheriff’s office decided to look beyond the traditional investigative uses of face recognition and to focus on how the quick, non-intrusive technology could be used to enhance operations at the jail.

By initially focusing on the booking facility where mugshot images are collected, Main believed he could create processing efficiencies by using the existing images to build a facial recognition database.  The database would then serve as the foundation for identity solutions within Pinellas County, and throughout the state (“Facial Recognition in Action”).

This system allows for search of at least two million images within ten seconds.  What is more, this browser based system is available in the cars of deputies that patrol the streets of the Pinellas County (“Facial Recognition in Action”).  Report on the use of face recognition technology for law enforcement in the Pinellas County continues thus: 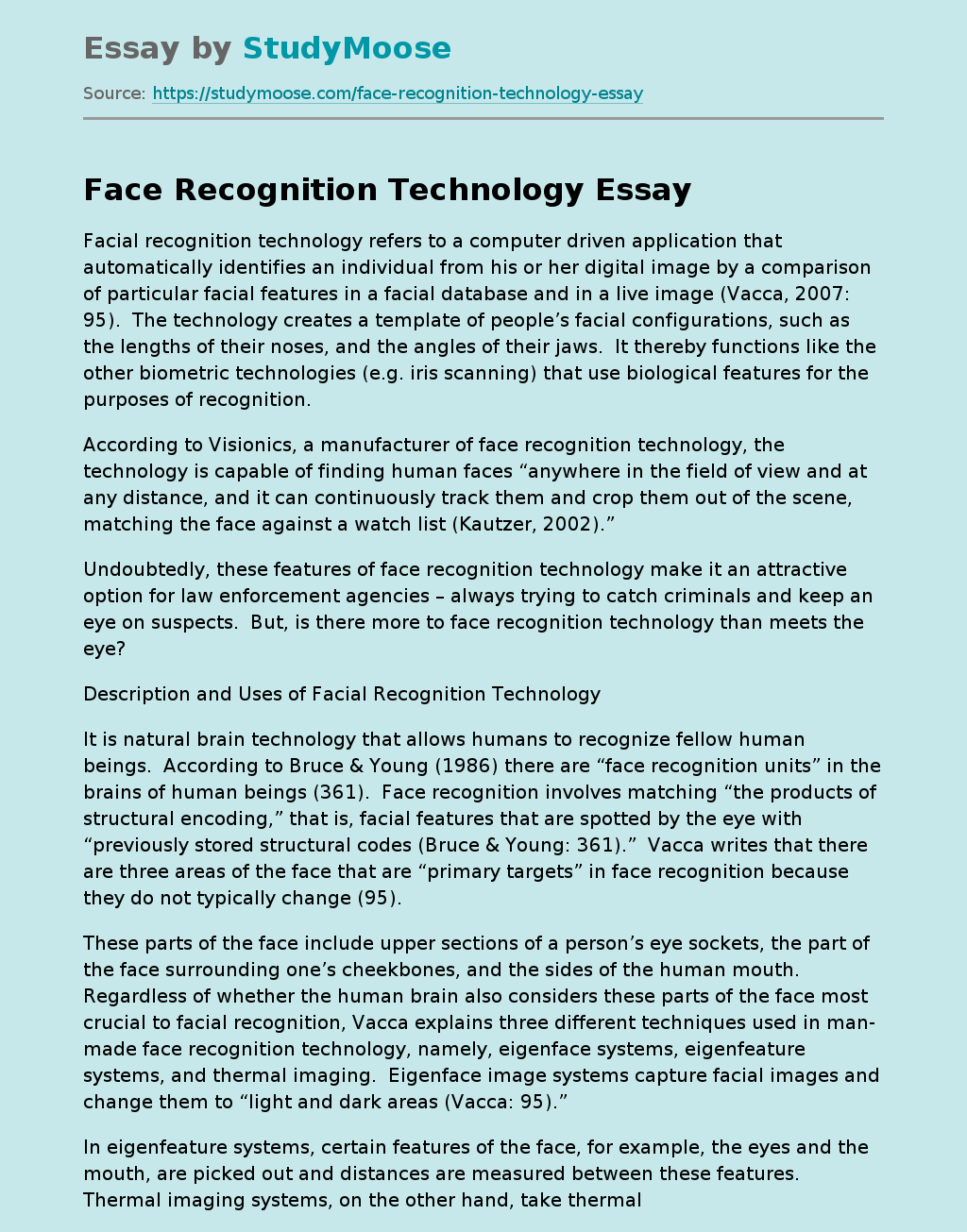