Ethics: For the field experiment, participants were not made aware of their right to withdraw at first, as doing so would have alerted them to the fact they were in an experimental situation and so would have had a significant effect on our findings. Both the field and laboratory experiments raised the issue of fully informed consent; the first because participants were not made aware of the fact they were part of an experiment and the second because they were not told there were leading questions.

Don't use plagiarized sources. Get your custom essay on
“ Eyewitness testimony Theory ”
Get custom paper
NEW! smart matching with writer

However, if they had known of this the validity would have been compromised due to demand characteristics, i.e. they would have known what was expected of them and so either tried to do this, or do the opposite.

Both would have distorted results. Informing the participants from the field experiment of the situation would have lowered ecological validity and emotional arousal, meaning an accurate comparison between the two situations would not have been possible.

Although the individuals themselves had not consented, prior general consent had been obtained from their parents, which gives some indication that participants would not have objected. This is backed up by the fact that, when given the chance to withdraw their results, none did so. As fully informed consent was an unavoidable part of the experiment, steps were taken to minimize the risk to participants, for example fully debriefing them afterwards to ensure they knew what they had been involved in, and that there was no physical or psychological damage.

As shown in the results section, ecological validity has not been found to have any significant effect of accurate recall in eyewitness testimony, meaning that the experimental hypothesis had to be rejected in favour of the null. Initially the fact that the difference between the two situations was so small was surprising (average of 5.9 correct answers for high ecological validity compared to 5.3 in the low ecological validity condition), as was the fact that out of 20 participants, only one person was able to answer the leading question correctly; she was from the low validity group and so would have been studying the scene more closely.

Although the null hypothesis has to be accepted, I feel that although the results were not statistically significant, they do still provide some support for the evidence looked at in the introductory section. The findings were in keeping with Loftus and Palmer’s study into the effects of leading questions of eyewitness testimony, as all but one participant failed to answer the leading question correctly. If the question had been “Did she put her bag down” as opposed to “Did she put her bag down on her left or her right”, it is likely that the participants would have thought more closely about whether or not she actually did, rather than automatically assume that she did and so guess at an answer.

As this shows that the phrasing of the question affects how a witness answers it, this shows support for Loftus and Palmer. Due to Loftus’ research into the ‘weapons focus’, the questions put to the participants concerned both central and peripheral detail, for example asking what grade the student got when she repeated it many times and this was the main focus of the episode; consequently 90% of participants were able to recall correctly. When asking less central questions, recall decreased e.g. whether she was wearing a watch (35% correct) and so I believe my research also supports this.

My research has several methodological limitations, the first of which being that the field experiment would not have created sufficient emotional arousal to produce a flashbulb memory; however to do so on young participants unaware they were taking part in an experiment would have been highly unethical. It would have been difficult to have used a sample in which people of both genders of all ages and backgrounds were represented, but the sample for this study was extremely limited (grammar school girls aged 12-13) and so the findings cannot be generalized to the wider population. However, this does reduce the likelihood of individual differences between the two groups. Using more questions may have been more useful, but this could have led to an overall decrease in recall as participants may have found remembering many small details as opposed to a few challenging, however using more participants would have been a great improvement.

A major limitation of the study is that while participants were being questioned individually, the rest may have been able to talk about what they saw, and when the questioned participant returned she may have informed the others of what questions were asked. This goes some way towards explaining why similar answers were obtained for several questions, although this could also be due to the fact that the sample was so limited and therefore all participants had the same ideas and schemas. If the experiment was to be repeated, I would use more participants from a wider sample and ask a few more questions, with equal focus on visual and acoustic recall. I would also use a written questionnaire to obtain their answers, as this would ensure all participants answered at the same time and were unable to confer. I believe these changes would improve the experiment and provide more conclusive results.

Further research could be carried out into the difference in recall of visual and acoustic details when in a state of high emotional arousal. An example of a field experiment testing this could be staging a fight between two people, questioning witnesses about equal amounts of both visual and acoustic aspects and then comparing the results to find out which is recalled better when emotionally aroused. Important research could also be carried out into effect of emotional arousal on how an individual responds to a leading question as this could prove very useful, for example if there were two witnesses to a crime and one was fairly calm while the other was not, which would be most likely to give more accurate evidence.

This experiment has implications in the field of eyewitness testimony – it suggests that reliability is not affected by differing levels of emotional arousal, which can prove reliability of witnesses in court and give more weight to their testimonies, which is important in terms of criminal cases. However, it also shows that witnesses are easily led by something as simple as the wording of a question and also that when someone fails to recall something they are liable to invent an answer, which somewhat reduces their reliability. This implies that more open-ended questions should be used so there is less scope for misleading.

Although this may be due in part to the methodological limitations (small sample, few questions, possible conferring), the research has not shown differing levels of emotional arousal to have any significant effect on recall. Appendix 1 Questions Asked: (Including answers) 1. Was Becky wearing trousers or a skirt? (Trousers) 2. What colour top was Becky wearing? (Red) 3. Was Becky wearing a watch? (No) 4. What was Becky holding in her hand? (A sheet of paper/UCAS form) 5. What grade had Becky’s application been given? (E) 6. What colour hair did Becky have? (Blonde). 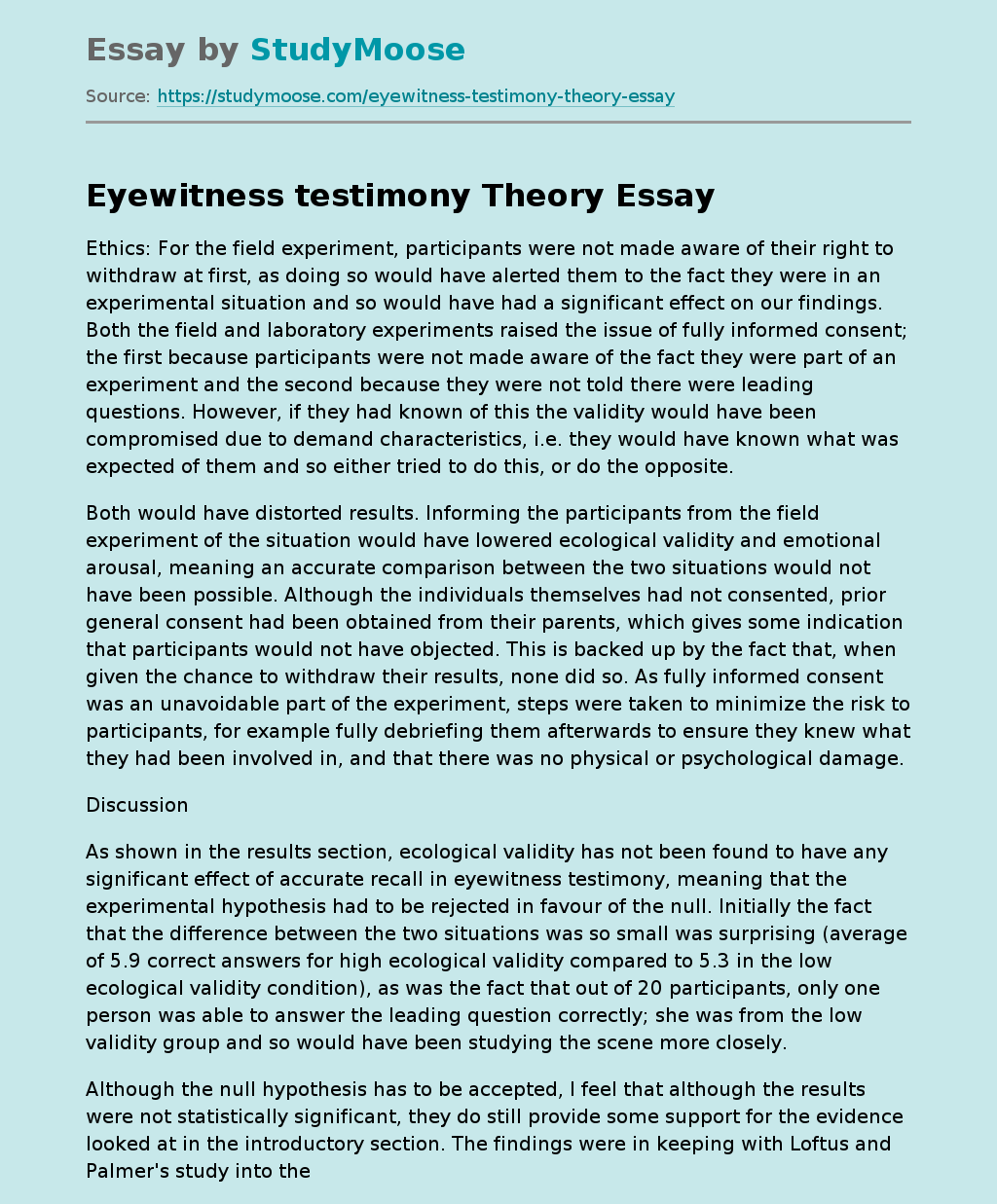