Don't use plagiarized sources. Get your custom essay on
“ Exponential and Logarithmic Functions Alvaro Hurtado ”
Get custom paper
NEW! smart matching with writer

Logarithmic functions are the inverse of exponential functions, y = loga x, where ”a” is greater to zero and not equal to one. These functions have certain differences as well as similarities between them. Also they are very useful for various situations in life.

Also we can see that to graph and exponential function it always has to pass through the point (0,1).

However, both of these functions also have similarities. Both of the functions contain an ”a” which has to be greater than zero and less than one.

Also when we graph both of the functions we can see that they will never touch an axis because of the rule that ”a” is greater than zero and less than one. To solve exponential functions, you use the same rules set of rules that you use to solve logarithmic functions. (logamn = loga m + loga n, logam / n = loga m – loga n, loga m = p x loga m, If loga m = loga n, then m = n. Where m and n are positive number, b is any positive number rather than one and p is any real number.) Also both of the functions have a base which is the ”a.” This are some of the similarities that we can see from the equations.

Logarithmic and exponential functions are very useful for many situations in real life. Exponential functions are used to estimate and graph topics that have to do with growth or any type of data that deals with an increase. For example is used to describe and graph the population of a country and its rapid change. Also it can be used to explain the exponential growth of almost anything. Logarithmic functions are also useful to calculate the interests you gain in a bank. Both of these functions are most commonly applied in finding the interest earned on an investment, population growth and carbon dating.

In conclusion we can see that even though the logarithmic and exponential functions are the inverse of each other they have similarities as well as differences between them. Also that the functions form a very important part of life because they are useful in different situations. As well, they are not only useful in some themes or topics like only biology and math but in a whole different variety, such as financial planning, banking, constructing, business and many more.

To graph exponential functions, remember that unless they are transformed, the graph will always pass through (0, 1) and will approach, but not touch or cross the x-axis. Example:

(Logarithms written without a base are understood to be base 10.)

In conclusion we can see that logarithmic and exponential functions are relevant for different situations in life. Also that they are similar in some ways even though they are the inverse of each other. But also they have differences between them.

While studying exponential growth, students can use an exponential model to express population growth. 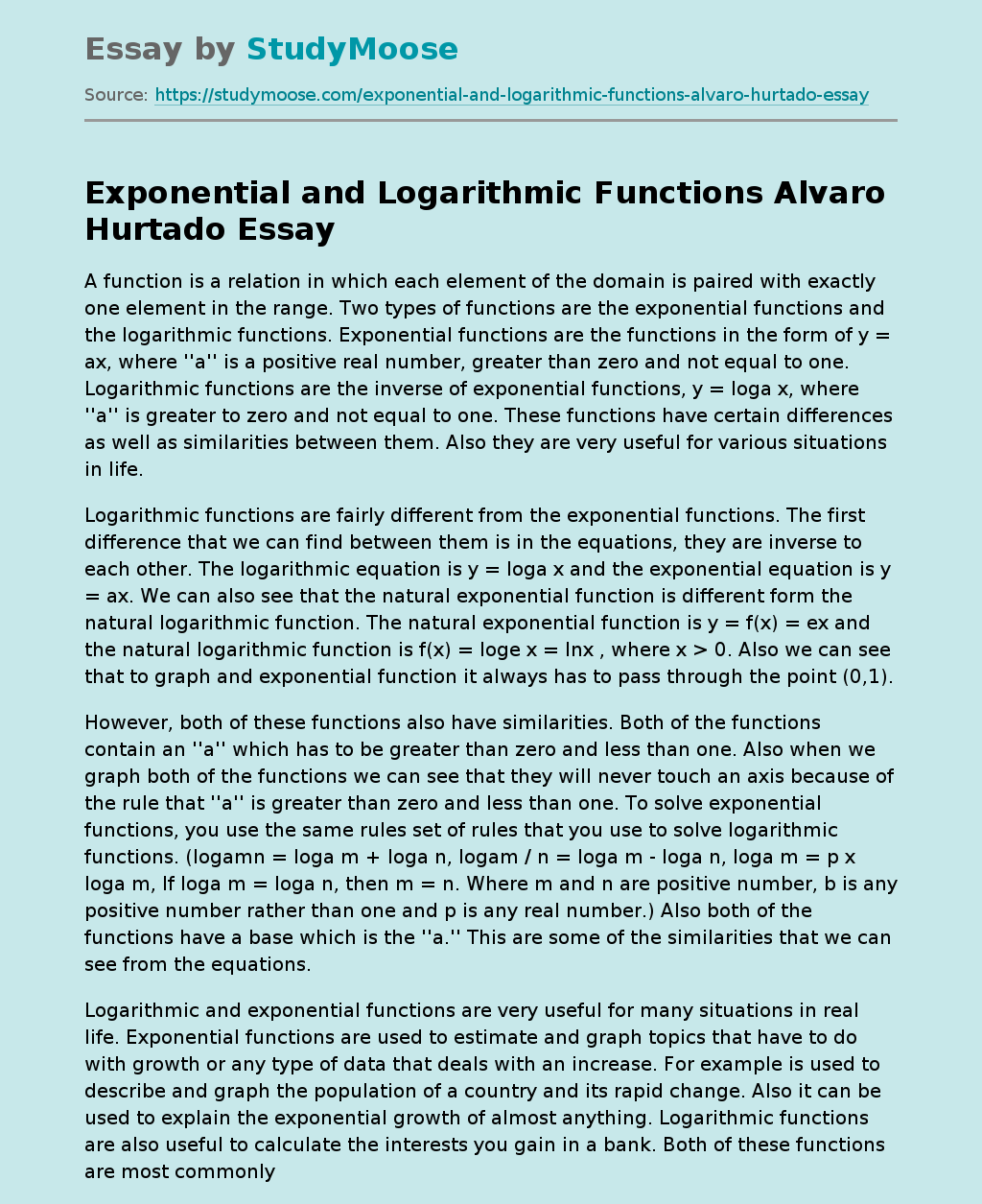