Explain the meaning of the following terms, using examples from the U211 materials and any relevant examples of your own

Part One: Explain the meaning of the following terms, using examples from the U211 materials and any relevant examples of your own. Lexical Density: Lexical density refers to the percentage of words in a text which are lexical items, compared to grammatical items. Lexical items are ‘an open system of nouns, verbs, adjectives, and so on, which can be added to in response to new ideas and new technology. ’ (Halliday, 1985, cited in Baynham and Maybin, 2007, p125).

In other words they are content words, which carry information and meaning.

Don't use plagiarized sources. Get your custom essay on
“ Explain the meaning of the following terms, using examples from the U211 materials and any relevant examples of your own ”
Get custom paper
NEW! smart matching with writer

This may, in part, be due to nominalisation (replacing one syntactic form with another), which reduces information about processes and the subject, whilst making text more lexically dense.

(Word count: 150 words) Informalisation: Informalisation is an argument put forward by several linguists that, in many contexts, English is becoming more informal and ‘conversationalised’. These linguists suggest ‘that the boundaries between language forms traditionally reserved for intimate relationships and those reserved for more formal situations are becoming blurred. (Goodman, 2007, p205). They are referring to the increasing appearance of informal forms and conversational styles in professional encounters and institutions.

Goodman (2007, p207) refers to ‘terms of address’ as a marker of informal English, which is increasingly likely to appear in more formal exchanges, with people often using first names at the initial meeting. Education, for example, is traditionally seen as relatively formal, yet at the school where I work staff, children and parents use first names to address one another.

Many of the features of informal English are employed by sales and advertising, which is now crossing in to ‘information domains’, through a process of marketisation. This is another example of border crossing, which interlinks with informalisation. (Word count: 158 words) Part Two: Baynham and Maybin (2007, p123) assert that ‘… electronic means of communication seem to have shifted the relationship between speech and writing. ’ Discuss this statement, using brief examples of your own to illustrate your points.

When we think of speech and writing, we often think of the ‘traditional’ distinctions and differences such as spelling, punctuation, intonation and non-verbal features. However, if we look more closely at the language contained in a range of texts, these distinctions are not so clear. In the following discussion, I will consider how far electronic means of communication are crossing boundaries between speech and writing and ‘shifting the relationship’ (Baynham and Maybin, 2007, p123) between the two.

The growth of electronic means of communication, in recent years, has altered the way we communicate on a daily basis. A large proportion of the population now use email, text messaging, chat rooms and instant messaging regularly. If we consider email for example, many of us may use this at work as well as at home. While the style may vary, dependent upon the context and recipient of an email, it is likely that it will contain ‘informal’ features and features commonly associated with speech.

In comparing a formal letter with a relatively formal email, I noticed that the email used an informal signature, while the letter was formal, with a closing formula, written signature and printed full name. The email also had a lower lexical density than the letter and used abbreviations and contractions e. g. ‘intro’ and ‘I’m’. This can perhaps be seen as an example of ‘informalisation’, with features traditionally associated with speech crossing the boundary in to writing.

Warschauer (2002, cited in Baynham and Maybin, 2007, pp131-132) refers to a transcription for colloquial Arabic, which Egyptian Arabic speakers use for email, texting and chat room communication. He suggests that English would be used for formal business communications and writers would code switch between colloquial Arabic and English in less formal contexts. It would appear from this example that colloquial features are crossing over in to writing, but this is dependent on the context and recipient.

This could suggest that rather than ‘shifting the relationship between speech and writing’ electronic means of communication are simply adding another dimension. Warschauer (2002, cited in Baynham and Maybin, 2007, p131) also mentions chat room communication which, similar to instant messaging, often takes the form of a ‘written conversation’. Studies such as Merchant’s 2001 study of teenage girls’ use of chat rooms (cited in Baynham and Maybin, 2007, pp127-128) have found many features of spoken language in this type of communication.

Features such as non-standard grammar and pronunciation, exophoric ellipsis and one word utterances are common, with non-verbal responses and mood signified with emoticons, capital letters, exclamation marks and stretching of words. Perhaps this is the clearest example of speech crossing the boundary in to writing, through electronic means of communication. These particular types of communication are often associated with the youth of society. Texting is also associated with youth, despite many adults using this type of communication.

Perhaps it is the language use or ‘text speak’ which is what we tend to associate with youth. There have been claims that ‘text speak’ has been crossing boundaries in to writing, in schools and even appearing in exam answers. The Daily Mail (Mail Online, 2006) reported that exam chiefs had admitted ‘that English answers written in text message language would be acceptable as long as they were correct. ’ This followed a few instances of ‘text speak’ appearing in student’s answers, and evoked a lot of debate about whether text speak was affecting literacy.

Whilst text messaging is a ‘written’ type of communication it, like chat rooms and instant messaging, has many ‘crossovers’ with speech. Texting often uses colloquial language, one-word utterances, ellipsis, non-standard grammar and punctuation and phonetic spelling, often incorporating numerals. If this type of language use is also crossing over in to more formal types of writing, then electronic types of communication are not only being affected by speech, but are themselves affecting other types of writing. Whether this is a good or a bad thing is up for debate.

It was believed previously that many people felt texting was ‘eroding youngsters’ literacy skills’ (guardian. co. uk, 2004) but, according to a report in The Guardian, studies have proved this to be unfounded and children were reportedly able to code switch between appropriate means of communication, according to context. In a study carried out by Cruickshank (2001, cited in Baynham and Maybin, 2007, p133) on the literacy practices of Arabic-speaking teenage boys in Sydney, Australia, two of the local teachers commented that the student’s use of chat rooms had actually improved their writing skills in English.

This would seem to suggest that colloquial language and features of speech are crossing over in to some types of writing but most writers are still able to code switch between different styles, based on the perceived formality of the context. If we consider the increasing practice of using text messaging to contact parents in schools for example, we can see that while the mode of communication is becoming more informal, the content of the message is still relatively formal. This draws on the staff’s ability to switch between styles based on context i. e.

It would be uncommon for a member of staff to use the same style when texting a parent as they would when texting a friend or family member. This may change in the future however, if informalisation continues to develop in professional contexts. Goodman (2007, p215) asserts that ‘written and electronic texts are becoming increasingly multimodal’ and often ‘incorporate visual or verbal elements that suggest speech, rather than writing. ’ This is an aspect of informalisation, which suggests border crossing between speech and writing is occurring in a broadening range of texts, including electronic texts.

The process of marketisation, seems to be further developing this ‘crossover’ between speech and writing, by incorporating these informal, verbal styles in to the domain of information e. g. Government documents and information leaflets. Goodman (2007, p215) claims that written and electronic texts are using visual elements such as speech bubbles, typographical devices, triadic structures, semi-phonetic representations of non-standard English and visually implied intonation, as ‘sales strategies’.

These markers of spoken English have been common in advertising, across a range of media, for some time. We often see such devices for example, on billboard and television advertisements and, perhaps more commonly, in emailed adverts and ‘pop-ups’. In a recent advertising email, I received from Sainsbury’s I found many of the features discussed by Goodman, as well as some less obvious style features, associated with speech such as abbreviations and colloquial phrases.

This suggests that, while not exclusive to electronic media, elements of speech are crossing the boundary in to writing. It is not uncommon to see ‘pop-up advertisements’, giving public information, using many of these features now, so perhaps this border crossing will continue to spread if marketisation continues to develop, as linguists have suggested. Throughout this discussion, I have considered several different types of electronic communication and to what extent these examples cross boundaries between speech and writing.

It does seem that there is increasing evidence of border crossing between speech and writing, in most types of electronic means of communication and perhaps this is evidence of a ‘shifting relationship’ between the two mediums. However, as I have noted throughout, the level of border crossing seems to vary between contexts, with contexts perceived as formal maintaining a much lower level of speech elements. That is not to say that there is no border crossing at all in these more ‘formal’ contexts and with the continued development of technology, perhaps we will see more evidence of this ‘shifting relationship’ in the future.

Explain the meaning of the following terms, using examples from the U211 materials and any relevant examples of your own. (2020, Jun 02). Retrieved from https://studymoose.com/explain-meaning-following-terms-using-examples-u211-materials-relevant-examples-new-essay 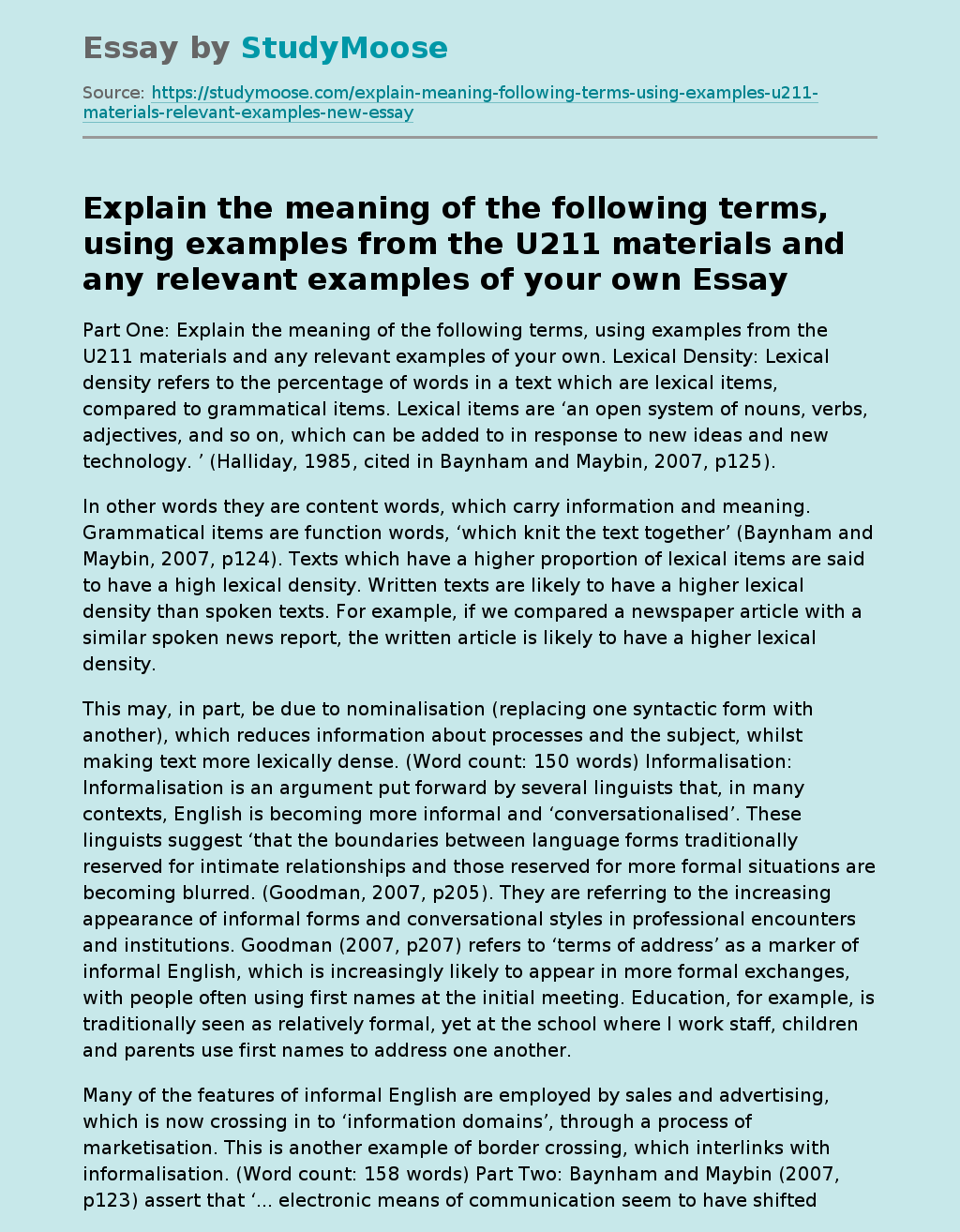