Examine the Factors Affecting the Domestic Division of Labour Among Couples

The Division of Labour refers to the range of tasks within a social system. This can vary from everyone doing the same thing to each person having a specialised role. The division of domestic labour is the tasks given to each person in a house unit. For example the wife may do the housework, whilst the husband goes out to work. The division of domestic labour can also include childcare and emotion work, two things that previously were completely down to the wife but now are becoming more evenly spread between family members.

Turn in your highest-quality paper
Get a qualified writer to help you with
“ Examine the Factors Affecting the Domestic Division of Labour Among Couples ”
Get high-quality paper
NEW! AI matching with writers

Cultural factors that affect the division of labour are aspects like lagged adaptation. Jonathan Gershuny said wives who are in paid work do less housework (men do 27%), but the tasks are still sex-typed: men focus on DIY where as women cook. His explanation was there are gradual changes in values- known as lagged adaptation, and that over time parental role models will show children that men do housework too.

Different ethnicities have different family structures- in many American families especially, the man is still the breadwinner and head of the household, while the wife cooks, cleans, and bears and raises children. Conjugal (marital) roles will vary depending on culture, if the society around a family typically has the man working then spending his leisure time with colleagues, that’s how that family will function because they are socialised that way.

Some legal factors influence the division of labour, for instance it’s now easier and more socially acceptable for couples to get a divorce, so in a way there’s more pressure on men to keep things civil in the household.

If the wife is unhappy, she can just leave. On the other hand, men and women don’t always have equal pay, which affects the division of labour as a popular belief in families is that the highest earner should do the least domestic work.

Economic factors have had a significant impact on the division of labour, ¾ of married/cohabiting women in the UK make money, which has resulted in ‘The New Man’. This is the idea that since women are bringing in an income, men are more willing to do domestic work. Rosemary Crompton pointed out that men do more in the home when the woman’s economical power increases (though the DOL is still unequal). However, women only earn ¾ of what men earn, so men can never do quite as much housework based on their wives income. Feminists on the other hand feel that instead of a change in men, all that has altered is that women now bear a dual burden; this is the combination of paid work and domestic work. They believe modern men are benefiting from their wives’ financial income on top of them doing the housework and looking after the children.

Lydia Morris found that even when the male partner is unemployed, the woman still does the domestic work as the male suffers a crisis of masculinity, so they refuse to demean themselves with housework. Women’s working hasn’t impacted on the division of childcare either; fewer than 4% of men were deemed the main child-carer in 1996. Additionally, Hochschild defined the concept of emotion work as a job where you manage someone’s emotions (for example an air stewardess). Feminists say women are working, looking after children/domestic labour, and are emotionally supporting the family. Jean Dunscombe and Dennis Marsden call this a triple shift (emotion work + domestic labour + paid work). So, in reality, the division of labour hasn’t changed through economic factors as much as perhaps it should have done.

Many technological advances have made domestic labour easier, including effective contraception (the pill, implant and condom) as modern families are often smaller than in previous years. Most births are planned, and so the household is well prepared for the extra work. In addition, labour saving devices, like the Hoover and dish washer have resulted in men being more likely to help with housework as it’s now less time consuming and strenuous.

Social factors that have influenced the division of labour include the lack of stigma attached to cohabiting couples; consequently they feel no pressure to get married. This could mean that gender roles aren’t as strictly enforced. Another important consideration is that in recent years, religion has become a less prominent aspect of life, a lot of families now won’t be religious at all and therefore don’t feel the need to treat each other a certain way as dictated by religion. Most social interaction of the current day can be traced back to religious codes of conduct, it’s possible than non-Christian societies expect wives to be treated differently to Christian ones.

Theoretical perspectives such as functionalism and the new right support the division of labour. They state that families need segregated conjugal roles because it’s biological instinct and that it benefits everyone, they feel these marital roles help to organise the family. One functionalist, Talcott Parsons believed that males should take on an instrumental role; they should work and will be the ones to achieve success, while females should assume the expressive role (looking after the children, and catering for the emotional needs of the family). A popular view in right-wing politics, functionalism and the new right is that couples shouldn’t be equal, as the male should be the head of the family, while retaining the role of breadwinner.

March of Progress sociologists (like Elizabeth Bott, Young and Willmott) argue the family is becoming more symmetrical with joint conjugal roles. These joint roles have become typical of working class life, in Young and Willmott’s opinions. Feminists like Ann Oakley disagree and say that segregated conjugal roles are socially constructed by men to benefit men as we still live in a patriarchal society. Her research found that men only have to do a small fraction of the domestic work for the household to qualify as symmetrical. This shows that although the UK advertises itself as a modern society, sexist views of the past are a frequent occurrence in our families.

(A.N: This was marked by my AS-level Sociology teacher and was given 18/24 marks, making it a Grade C essay. Some tips she gave- Use AO2 phrases to show evaluation, and cite evidence to support perspectives. It is written in UK English. Apologies for any spelling errors and incorrect Sociologist names.)

Examine the Factors Affecting the Domestic Division of Labour Among Couples. (2016, Apr 27). Retrieved from http://studymoose.com/examine-the-factors-affecting-the-domestic-division-of-labour-among-couples-essay 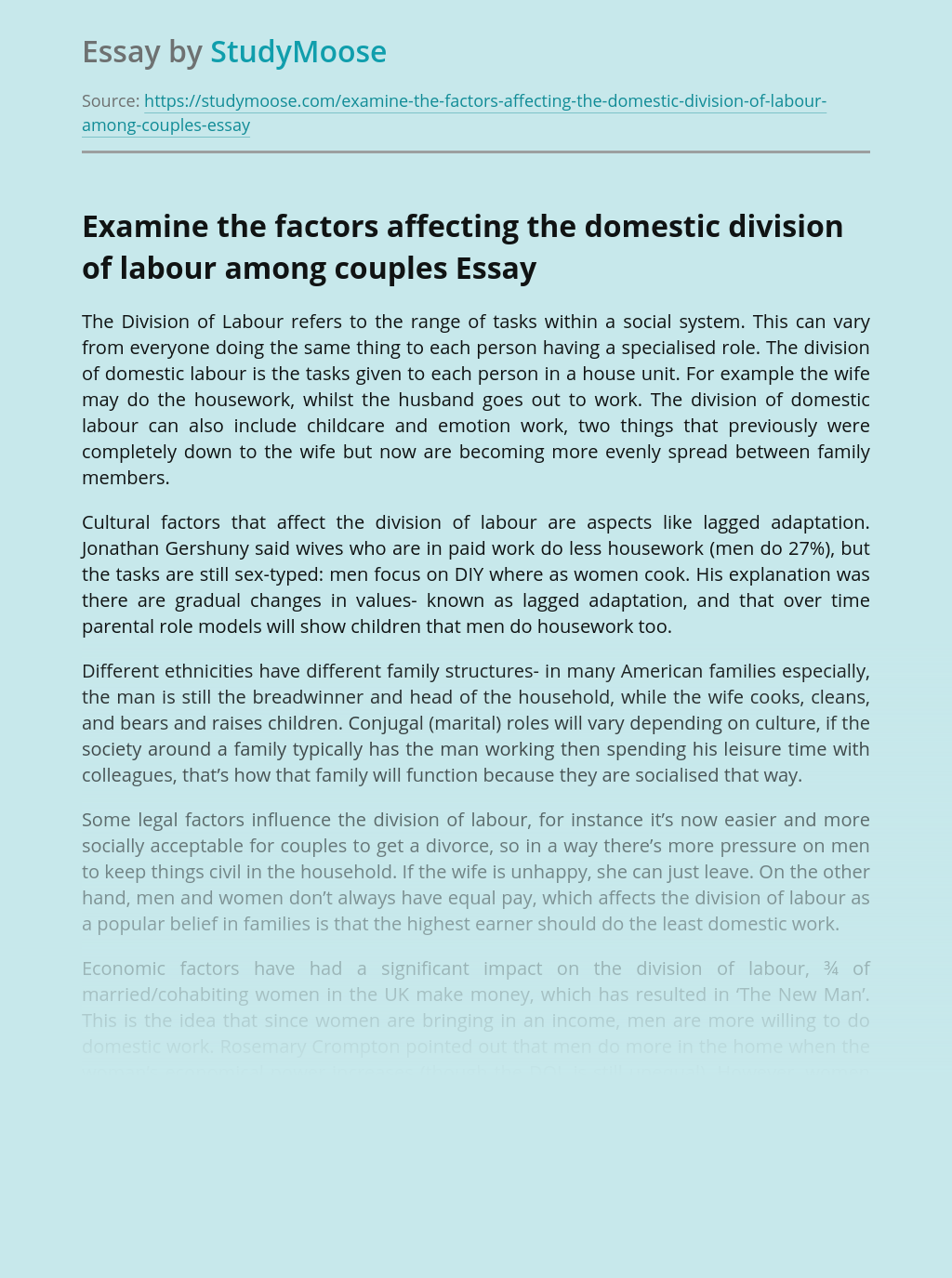 Turn in your highest-quality paper
Get a qualified writer to help you with
“ Examine the Factors Affecting the Domestic Division of Labour Among Couples ”
Get high-quality paper
Helping students since 2015
Stay Safe, Stay Original